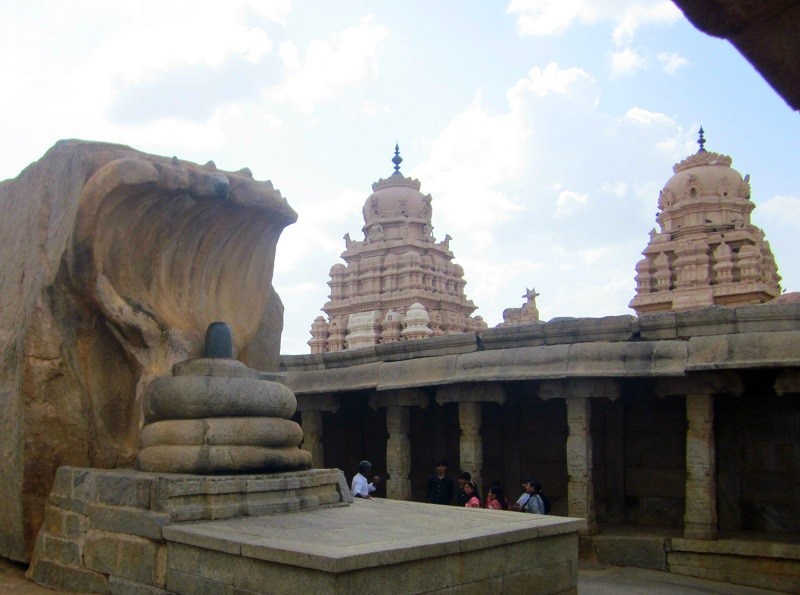 Peak Season: January & April to May

Lepakshi was founded in the 16th century during the reign of the Vijayanagara king, Aliiya Rama Raya. Virupanna, the royal treasurer was accused of drawing funds without the king's permission from the state treasury to build the Veerabhadra temple at Lepakshi. However, he blinded himself to avoid the king's punishment. Even today one can see two dark stains upon the wall near the Kalyana Mandapa, which are said to be the marks made by his eyes. Hence the village is called 'Lepa-akshi', means a village of the blinded eye.

Lepakshi is the centre of some of the finest temple architecture and paintings. Lepakshi consists of three important shrines dedicated to Shiva, Vishnu and Veerabhadra, of which Veerabhadra temple is the most important place to visit in Lepakshi (this is also referred as Lepakshi Temple). The temples of Papanatheswara, Raghunatha, Srirama, Veerabhadra and Durga are located in the same complex on a hillock named as Kurma Saila (tortoise shaped hill).

The Vijayanagar styled temple has several wonderful paintings on the ceiling. The hanging pillar supported from the top is a surprise for the visitors. To the south of the main shrine is a huge Nagalingam, standing on a granite block, shrouded by a seven-headed cobra, magnificently carved out of single rock. The monolithic Nandi in Lepakshi village is another remarkable feature.

The handicrafts of Lepakshi are also quite popular among women all over the country.

The best season to visit Lepakshi is from October to March while the Peak Season is January & April to May. It usually takes around halfday to visit all places in Lepakshi. Accommodation is also available with newly built AP Tourism Haritha resort near Nandi statue.

How to Reach Lepakshi

How to Reach Lepakshi - Full Details

Top 10 Places to Visit in Lepakshi

#1 of 3 Places to Visit in Lepakshi

At a distance of 400 m from Lepakshi Bus Stand, The Veerabhadra Temple is the famous temple situated in Lepakshi (this is also referred as Lepakshi Temple). It is famous for its sculptures and archaeological beauty created by the artists of Vijayanagara Empire. It is considered as one of the best temples built by Vijayanagaras and is the prime attraction of Lepakshi.

The ancient shrine was constructed by Saint Agastya which was rebuilt in the present structure by Virupanna, the treasurer of the Vijayanagara King Aliiya Rama Raya. According to the legend, Virupanna, the royal treasurer was accused of drawing funds without the king's permission from the state treasury to build the Veerabhadra temple. However, he blinded himself to avoid the king's punishment. Even today one can see two dark stains upon the wall near the Kalyana Mandapa, which are said to be the marks made by his eyes.

The temple is dedicated to Lord Veerabhadra, .....

#2 of 3 Places to Visit in Lepakshi

At a distance of 400 m from Lepakshi Bus Stand, The Kalyana Mandapa is situated inside the Veerabhadra Temple complex (Lepakshi Temple). It is among the prime places to visit in Lepakshi.

The Kalyana Mandapa built on an elevated platform follows similar structure to that of main temple mandapa with circular arrangement of pillars. This structure was built to perform the Kalyana ceremony for Lord Shiva and Parvathi during annual festivals of the temple. The carving in this beautiful mandapa depict that several gods and saints from heaven attend the wedding ceremony - Devendra, Vasishta, Brihaspathy, Viswamita, Vayu, Yama, Varuna, Kubera, etc.

#3 of 3 Places to Visit in Lepakshi

The Lepakshi Nandi is made out of single granite. The monolithic Nandi sculpture is said to be the second largest monolithic structure in India after Gomateshwara in Shravanabelagola. It is 20 feet in height and 30 feet in length. The Nandi statue is decorated with a necklace, muvvalahara, a bell chain with small horns.

It is noticeable that the head of the bull is held aloft at a higher angle than usual. In addition, the expression of submission, which is typical of Nandi before Shiva, is not seen in the statue here.

This big granite bull is situated on the main .....