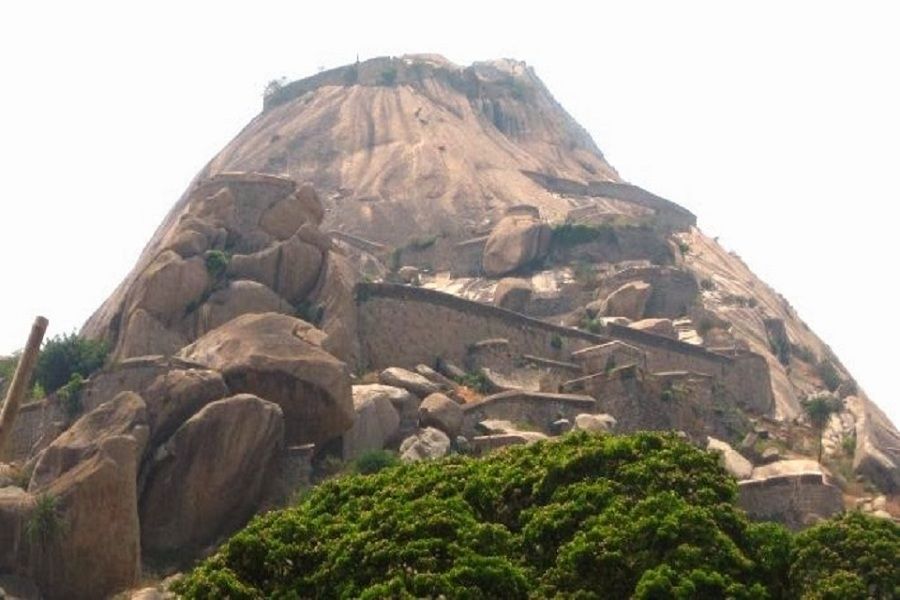 At a distance of 100 km from Bangalore, Siddara Betta is a mountain and pilgrimage place situated near Koratagere in the Tumkur district of Karnataka. It is one of the top places for trekking near Bangalore, and among the popular religious places in the Tumkur region.

Located at an elevation of 1700 feet, Siddara Betta is a tourist place surrounded by rocky hills, temples, and caves. The hill is frequently visited by trekkers, adventures as well as pilgrims who climb the mountain to visit the shrine of Lord Siddalingeshwara which is placed inside the caves. Siddara Betta means 'Hill of Saints' in the local Kannada language owing to the many Hindu saints who perform penance and meditation within the caves here in the olden days. Besides, this place is also very popular for medicinal plants.

The hill is very much loved by trekking enthusiasts and professional climbers due to the amazing panoramic views of the surrounding villages and the serene environment atop. The 4 km trekking path is moderate in terms of the level of difficulty. The trek pathway starts with a flight of staircase and later progress to a more rugged stairway carved onto the hill with a steeper gradient. It takes 45 minutes to reach the natural cave temple of the Lord Siddeshwara Swami from the base of the hill. After that, the trekking trail traces through some huge boulders and caves.

From here, one has to take the path to the right of the cave temple to reach the summit of the hill. On the way, one can see a tiny crescent-shaped man-made pool called Alasande Kere. There is a ruined fort on the summit which was built by King Kurangaraya in the 13th century. It is also believed that King Kurangaraya vanquished in one of the many wars hid with a small group of his supporters in Siddara Betta which was at that time called Suvarana Giri ( Golden Hill). The view from the apex of the hill is just incredible. Besides trekking, cave exploration at Siddara Betta is preferred by many.