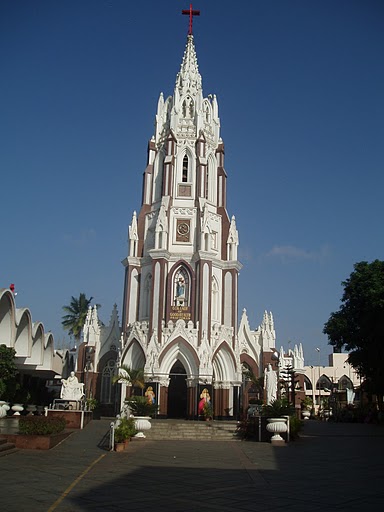 Place Location: Opposite To Russel Market Square In Shivajinagar

At a distance of 5 Kms from Bangalore City Railway Station, St. Mary's Basilica is situated opposite the Russel Market Square in Shivajinagar. This is the oldest church and is the only church in the state that has been elevated to the status of a minor basilica.

It was initially a small chapel built by Abbe Dubois in 1818. Later it was re-styled by Rev. LE Kleiner. This Church was raised to the status of a Basilica in 1973 on the order of Pope John Paul VI. It was the sixth basilica in India. In 1882, it was further adorned with stained glass windows brought from Paris.

This basilica has been built in Gothic style with arches, ornamental motifs and stained glass windows. Multiple columns and tall spires of the basilica can be seen from quite a distance. The stained glass windows were removed during World War II and were subsequently restored in 1947. Every year on Sep 8th, the feast of the Virgin Mary is celebrated here. As a part of the feast, an annual car procession is held.