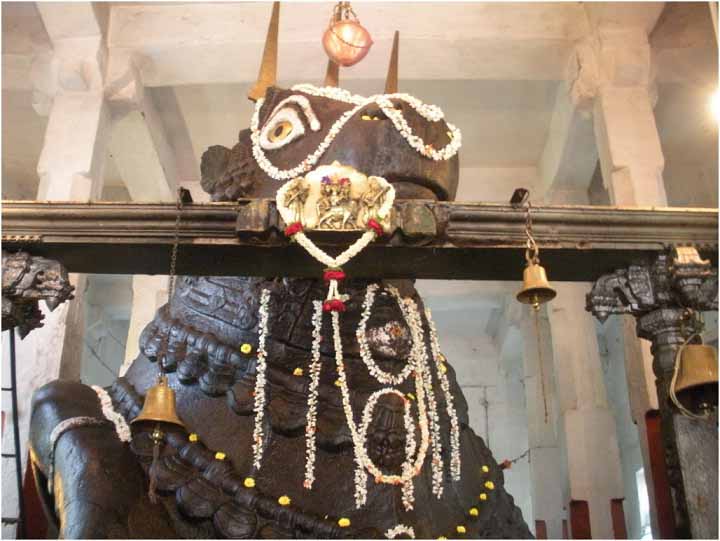 #7 of 80 Places to Visit in Bangalore

At a distance of 5 km from Bangalore City Railway Station, Bull Temple also known as Basavanagudi Nandi Temple is Hindu temple situated in Bull Temple Road, Basavanagudi area of South Bengaluru. This is one of the oldest temples in Bangalore, and also one of the must visit places as part of Bangalore Tour Packages.

The Bull Temple is dedicated to the sacred bull Nandi, the vehicle of Lord Shiva. The temple was built in 1537 by Kempegowda in the Dravidian style. It is one of the popular places to visit in Bangalore. The temple is relatively small in size, but houses one of the largest monolithic Nandi statues in the world which measures 4.5 meters in height and 6 meters in length. The temple also houses the idols of God Surya and Chandra, on their chariots. A 17th-century inscription at the base of the structure mentions a stream called Vrishabhavathi that originated here. The tower over the shrine was constructed in the early 20th century and is adorned with figures of gods and motifs.

As per legend, a bull used to destroy the groundnut crops, enraging a farmer who hit the bull with a club. The bull sat stunned and was suddenly transformed into a stone. The shocked farmer decided to build a temple to please the bull but was shocked to see that the bull was growing in size. The worried farmer then prayed to Lord Shiva who advised him to retrieve a trident buried a few feet away from the bull and place the trident on the forehead of the stone statue to stop it from growing. As a tradition, the farmers of Basavanagudi organized a Groundnut Fair known as Kadalekayi Parashe, near the temple, during November and December, offering their first harvest to the bull.

The Bugle Rock Park and Kempegowda's watchtower on the rock are worth seeing. The rock is 3000 million years old and is contiguous to the Lalbagh rock. Kempegowda, who built four watchtowers around Bangalore, constructed one at Bugle Rock to mark the city's southern boundary.