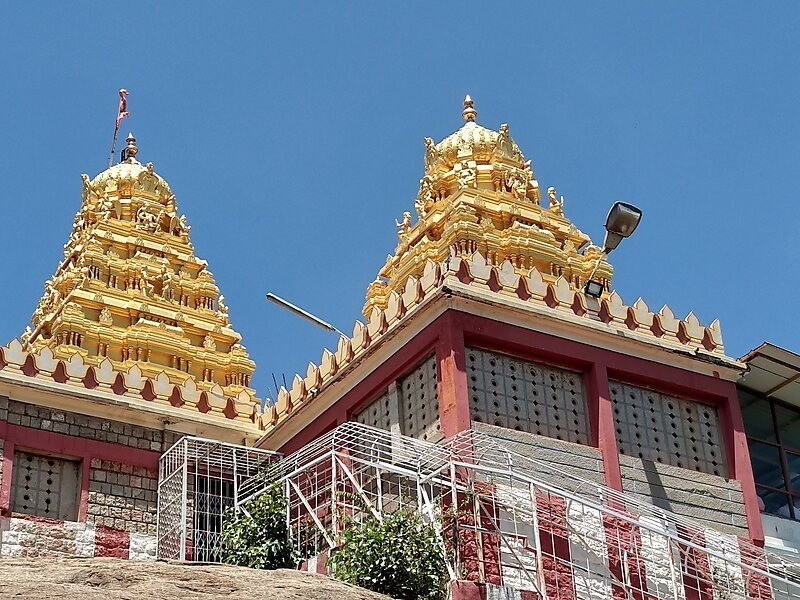 Place Location: In The 9th Block Of Jayanagar

At a distance of 10 km from Bangalore Central Railway Station, Sri Ragigudda Sri Prasanna Anjaneya Temple is a Hindu temple situated on a hillock in the 9th Block of Jayanagar suburb in Bangalore. It is one of the popular places to visit in Bangalore.

Built in 1972, Ragigudda Sri Prasanna Anjaneya Temple is dedicated to Hindu God- Hanuman. The temple spreads over a vast area of 5 acres. The chief deity of the temple was formed with a heap of grains of Ragi millet and hence, it came to be known as Ragigudda- 'Ragi' meaning millet and 'gudda' meaning a hillock.

According to mythology, this place owes it to a pious lady Sudharma who was the wife of a local chieftain. One day the trinity comes in the form of visitors and asks for bhiksha (alms). She gives them newly harvested Ragi. Her mother-in-law disapproves of it and wants it back. This being an unholy act she says that if the visitors do not want the bhiksha then she does not need the Ragi. This Ragi becomes a hillock. In the end, the holy trinity is pleased with her selfless behavior and grant her their sacred darshan. The holy trinity decided to stay near the same hilltop and so they transformed themselves into rocks near the temple premises. The rocks now bear engravings on them and are open for public view.

The temple houses a huge gorgeous idol of Hanuman and beautiful shrines of Ram, Sita, and Lakshman, along with a Shivaling. The temple complex boasts of a water tank called the Pushkarni, an auditorium, a tiny Prasad division, and an amphitheater. It also flaunts an artificially created waterfall that beautifies the already enchanting hilltop view. There is also a smaller temple dedicated to Ganesha, Navagraha, and goddess Rajarajeshwari at the base of the hillock.

The most important festival of the temple is the Hanuman Jayanti, which is a 12- day long festival and is a grand event, celebrated with a lot of zeal and fervor in December. A lot of yajnas, abhisheka, and poojas are carried out with the Mahaprasad being served to thousands of devotees. The temple also has a charitable front that helps the unprivileged and those in need and care.