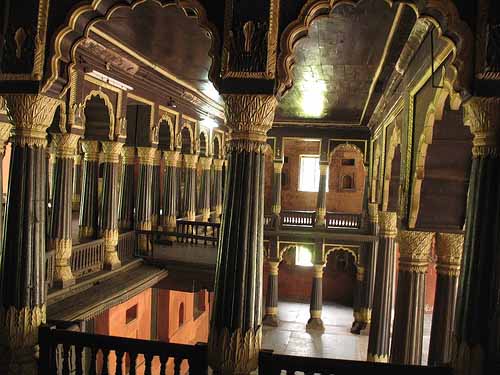 #5 of 80 Places to Visit in Bangalore

At a distance of 3 km from Bangalore City Railway Station, Tipu Sultan's Palace or Tipu's Summer Palace is situated near the Tipu's Fort at Albert Victor Road. This palace stands as one of the notable Islamic buildings and an important landmark in the city of Bangalore. This was used as a summer retreat by the Sultan, who lovingly called it the Rash-e-Jannat meaning Envy of Haven.

Hyder Ali started the construction of the palace within the walls of the Bangalore Fort and it was completed by Tipu Sultan in 1791. Used as a summer retreat, the structure is similar to the Daria Daulat palace of Srirangapatnam. After Tipu Sultan's death in the Fourth Anglo-Mysore War, the British Administration used the palace for its Secretariat before moving to Attara Kacheri in 1868.

The Summer Palace is an example of Indo-Islamic architecture. The entire palace is built of teak wood, mortar, stone and plaster. It is laid on a stone plinth. The structure is two-storied and is supported by wooden pillars that rest on the stone base. The exquisitely carved pillars support giant wooden beams that hold the structure. It is believed that Tipu Sultan used to conduct his durbar from the upper floor of the palace. The upper chambers and balconies can be accessed by four staircases with the central portion being a large hall that leads to four smaller rooms. These rooms are considered to be women's quarters. Beautiful floral motifs enhance the walls and the ceilings of the palace.

The palace now houses a small museum showcasing various achievements of Tipu Sultan and his administration. There are several portraits of the people and places of that time. Besides the delicate carving and paintings, it houses an art gallery of nearly a thousand historical photos and artifacts of Hyder Ali, Tipu Sultan and other famous personalities. There is a replica of Tipu's Tiger, which is in the Victoria and Albert Museum in London. Tipu Sultan's clothes and his crown are present in silver and gold pedestals.

The site also holds a painting of grand throne visualized by Tipu Sultan himself. Coated with gold sheets and stuck with precious emerald stones, Tipu had vowed never to use it until he completely defeated the English Army. After Tipu Sultan's death, the British dismantled the throne and auctioned its parts. Museum is maintained and managed by the Archaeological Survey of India.

Entry Fee: Rs.5 for Indians and Rs.100 for foreigners. Photography is allowed and there is no special fee for camera.

Timings: 10 AM to 6 PM from Monday to Saturday. Closed on Sundays.