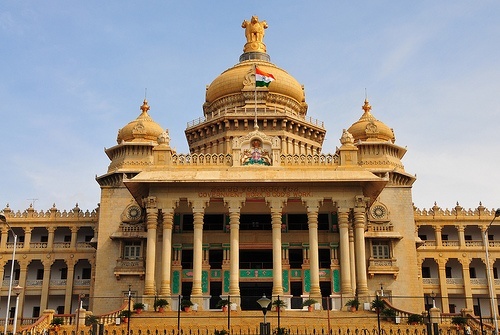 #8 of 80 Places to Visit in Bangalore

At a distance of 3.5 km from Bangalore City Railway Station, Vidhan Soudha is the state legislature building located on Dr. Ambedkar road at the northern end of Cubbon Park. It houses the Legislative Chambers of Karnataka State. This is one of the top tourist places to visit in Bangalore and also the largest Legislative building of India. This is one of the prime attractions of Bangalore city and also most commonly used to represent Bangalore.

Kengal Hanumanthaiah, the Chief Minister of Mysore, is credited with the conception and construction of the Vidhana Soudha. The foundation stone was laid by the then Prime Minister of India, Jawaharlal Nehru, on 13 July 1951. It was completed in the year 1956 at a total cost of around Rs. 1.75 crore.

Vidhana Soudha was built in the Neo-Dravidian architectural style and has the elements of Indo-Saracenic, Rajasthani and Dravidian designs. The magnificent white building is spread over 60 acres of land. The imposing white building comprises of several carved pillars, bases, pediments, cornices and arches.

The structure has four floors measuring 700 m × 350 m. Its eastern face has a porch with 12 granite columns, 40 feet (12 m) tall. The central dome of the building is 60 feet in diameter and is supported by 8 pillars. The central dome is crowned by the four headed lion, the national emblem of India. It also has six small domes, four in the front and two at the back side.

The attractive staircase with 45 steps is 204 feet wide, 70 feet deep and gives direct access to the floor leading to Assembly Chamber. There are three hundred rooms in Vidhan Soudha accommodating about twenty-two departments of the state government.

Presently a replica known as Vikasa Soudha has been built by the government of Karnataka adjacent to the Vidhan Soudha as a secretariat building. The High Court of Karnataka is also located opposite to the building.

The admission to the building has been restricted and one has to take prior permission before visiting its interiors. It looks beautiful on Sunday evenings and on public holidays. The lights are kept on from 6 PM to 8:30 PM.