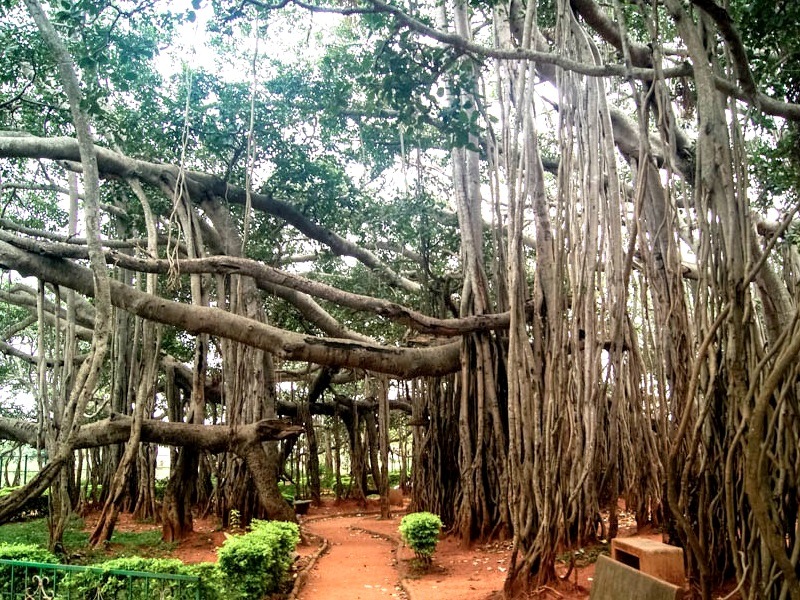 At a distance of 25 kms from Bangalore City Junction and 32.6 km from Ramanagara, The Dodda Alada Mara literally translated to Big Banyan Tree is a giant Banyan tree located in the village of Kethohalli in the Bangalore Urban district of Karnataka. This is one of the popular tourist places near Bangalore.

Dodda Alada Mara is a single Banyan tree that is 400 years old and has spread over 3 acres of land. This tree is said to be the largest tree in Karnataka and the second largest in India. It has a circumference of more than 250 m and has more than a thousand aerial roots. In last 10-15 years the main root of the tree succumbed to natural disease, and thus the tree now looks like many different trees. The area is fenced and well-maintained with pathways, bright cement seats and handy dustbins.

There is small temple dedicated to Lord Muneshwara (Lord Shiva). It is believed that the Big Banyan Tree symbolizes the holy trinity of Hindu Gods. The root, stem and branches represent Brahma, Vishnu and Shiva respectively. The big banyan tree is also a well-liked outing for quite some time as well as a preferred location for several film shootings.

Manchinabele dam which is 8 km and Mukti Naga Temple, which is 3 km from Dodda Alada Mara are the nearby attractions. Mukti Naga temple houses the world's largest monolithic statue of Lord Naaga about 16 feet tall and 36 tons of weight.

The Big Banyan Tree can be reached by travelling 7 km down the narrow road to the right at the Kumbalagod junction on Mysore road. Buses can be taken from Majestic to Kengeri and then from Kengeri to Dodda Alada Mara. There are direct buses from KR market to Dodda Alada Mara which stops just beside the tree.