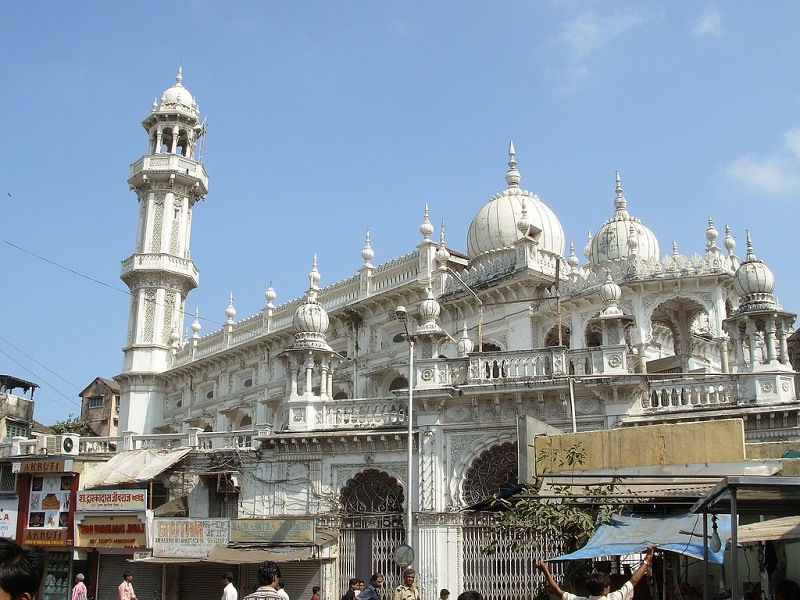 At a distance of 1.5 km from Mumbai Chhatrapati Shivaji Terminus, Jama Masjid, also known as Friday Mosque, is the oldest mosque in Mumbai situated at the renowned Sheikh Memon Street near Crawford Market. This is the largest mosque in Mumbai and also one of the popular pilgrimage places to visit in Mumbai.

It is said that the Jama Masjid was first situated near Dongri and was later moved to somewhere near to the Crawford market. In 1770 CE, the mosque was destroyed by Governor William Hornby. In the 18th century, a large tank (water reservoir) was situated at this site in the midst of gardens belonged to a Konkani Muslim merchant. He was agreed to the erection of a mosque at this site on condition that the tank was preserved intact in 1775 CE. The structure of the present Jama Masjid was started in 1775 CE and the construction was completed in year 1802 CE.

The Masjid is a quadrangular building of brick and stone encircled by a ring of terraced roofed and double storied buildings. The main eastern gate leads to an ancient tank filled with about 10 feet of water. The tank is fed by springs at the bottom that contains gold and silver fish and few turtles. This is used for ritual ablutions; however modern facilities are also available for this purpose.

From the depth of the tank rise sixteen black stone arches, constructed in 1874, which support the whole fabric of the mosque, the upper story being upheld by five rows of wooden pillars, each of which contains a receptacle for sacred books. The arches in the tank were built in 1874 at a cost of Rs. 75000/- while other noteworthy additions to the premises are the large windows in the north, east, and south sides constructed in 1898, and the school building Rs. 20000 in 1902.

This is the main mosque for the Sunni Muslims and was constructed & is managed by Konkani Muslims. Attached to the mosque was a Madrassa Muhammadiah, in which free secular and religious education was imparted to Muslim youths. The Madrassa had a hostel attached to it.