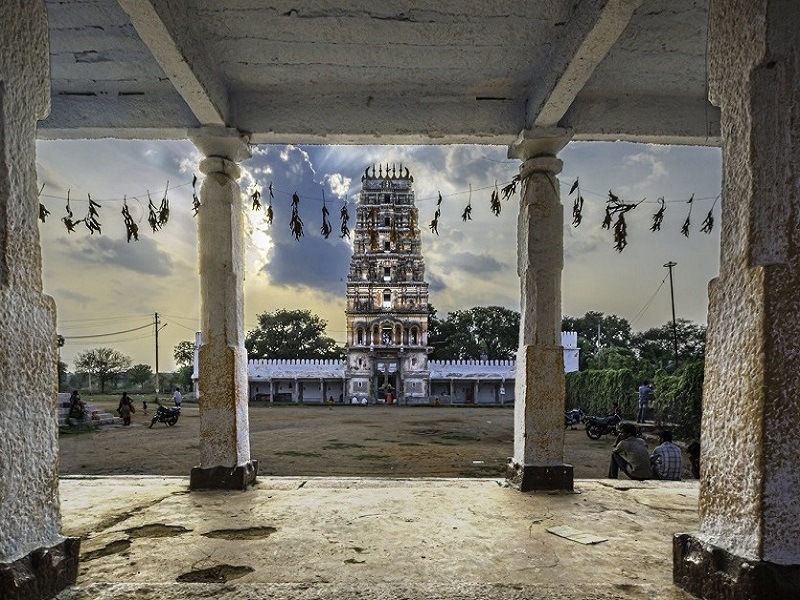 #1 of 60 Places to Visit in Hyderabad

At a distance of 30 km from Hyderabad and 5 km from Shamshabad Bus Stop, Sri Rama Chandra Swamy Temple of Ammapally is a very ancient Temple and famous for film shootings. This is also one of the most visited among Hyderabad tourist places.

The Rama temple was built by Vengi kings in 13th century but the idol was 1000 years old. The temple is adorned with a large seven-story tower which is quite famous among Telugu movie fans. There is a large image of Lord Vishnu is sleeping posture above the gateway of the tower.

The tower is followed by the main temple with a large corridor around the temple. The Idols of Rama, Sita and Laxmana and its Makara Thoranam are beautifully formed from single black rock. Anjaneya, usually accompanying Lord Rama, is not seen in the garbhagriha. Instead, Anjaneya Swamy idol is placed near the Dwaja Sthambam facing Sri Rama.

There is a large temple pond which is very ancient. The pond is surrounded by porticos and once it provided shelter to the pilgrims. The surroundings of the pond are filled with coconut trees. There is a mandapa opposite to the temple.

Sri Rama Navami is celebrated with great passion at this temple every year (Apr).

In order to reach the temple from Hyderabad city (via Mehdipatnam), one has to take right turn at Shamshabad Begumpet junction and drive for 5 kms. If you take ORR, take Shamshabad / Airport exit, driver towards Shamshabad town and take left turn at Bus Stop junction. The temple is situated towards left side close to the main road.