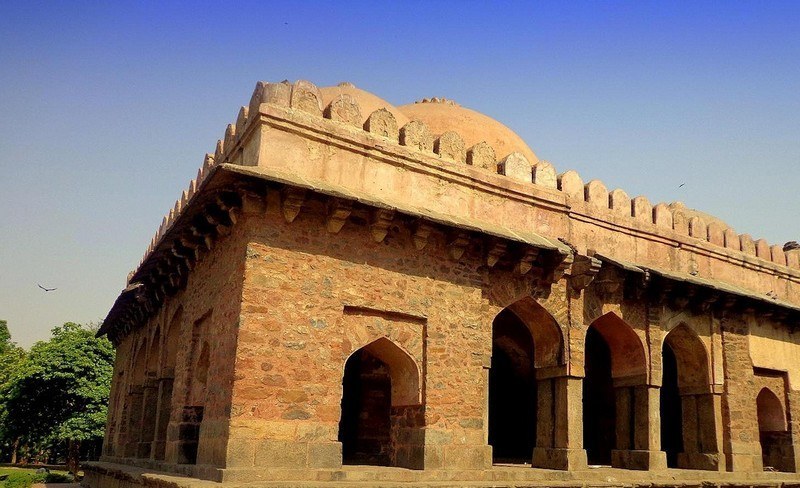 At a distance of 7.5 km from New Delhi Railway Station and 2 km from Hazrat Nizamuddin Station, Barakhamba is a 14th century tomb located on the eastern end of Lodi Road near the Sabz Burj and is protected by the Archaeological Survey of India. It is located in the Nizamuddin heritage area at the entrance road to the Nizamuddin Dargah.

Barakhamba, also known as Barakhamba Monument is an ancient tomb belonging to the Lodi period. The name of the monument, Barakhamba, literally means twelve pillars in Hindi and Urdu languages. This name has also been used for a modern metro road, called Barakhamba road, located at the heart of the city in Connaught Place.

Barakhamba monument is a tomb of an unknown nobleman from Lodi period. It has no doors or lattices and is open on all four sides. The tomb has twelve pillars and has three arched openings on each face. The passage, laid around the central chamber, has four domed sections at each corner.

The partially demolished remains of Lal Mahal are situated close to the tomb. This heritage monument also called Kushak Lal was built by Balban (1266-1286), the Slave Dynasty ruler, during the rule of Sultan Nasiruddin Mahmud Shah. This red sandstone structure had prominent chhatris which have been demolished.

Subz Burj, an impressive tomb made of blue tiles and stone, is located at a circle opposite to the entrance gate to the Barakhamba. It is known as Nila Gumbad because of its blue coloured dome. The tomb is believed to be of Fahim Khan who was an attendant to Abdul Rahim Khan during Jahangir's reign.