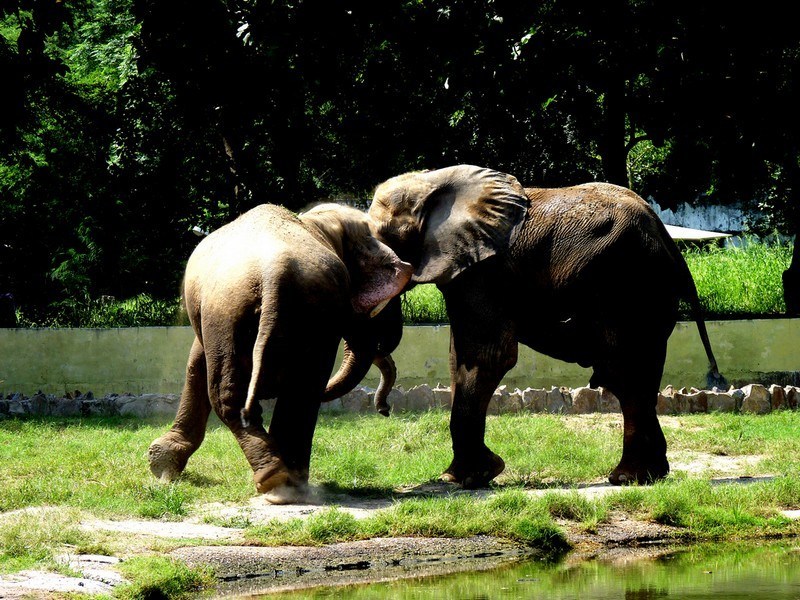 At a distance of 7 km from New Delhi Railway Station and 3.5 Km from India Gate, The National Zoological Park is situated near Purana Qila in Delhi. It is one of the best Zoo parks in India and a top tourist attraction in Delhi.

The Park was formally inaugurated on 1st November, 1959 by Mr. Punjab Rao Deshmukh, Agriculture Minister of India in the first cabinet. This Park was initially known as Delhi Zoo and renamed as National Zoological Park in 1982 with the idea of it being the model zoo of the country.

The park covering a large area of 176 acres is a perfect place for breeding endangered species. The zoo is home to about 1350 animals representing almost 130 species of animals and birds from around the world. Some of the famous species of animals present here are spider monkey, zebras, chimpanzee, hippopotamus, deer, tiger, lion, African wild buffaloes and many more.

The National Zoological Park also runs conservation initiatives for animals like the Royal Bengal Tiger, Swamp Deer, Asiatic Lion and the Red Jungle Fowl among other endangered species of animals. Birds like emu, banteng and macaque along with king cobra and pythons can also be seen inside the Delhi Zoo. Other than that the zoo also has an underground reptile house which houses reptiles like the Gharial, Marsh Crocodile, Indian Cobra, Indian Star Tortoise and the Indian Sand Boa among others.

The Park consists of more than 200 different varieties of trees. The park premises also houses a library that provides good information about the resident animals and birds of the park.

Delhi Zoo also facilitates the visitors a canteen and battery operated vehicles at reasonable prices but exploring by food is recommended for the best experience.

Timings: 9 AM to 4.30 PM on all days except Friday and on National holidays.