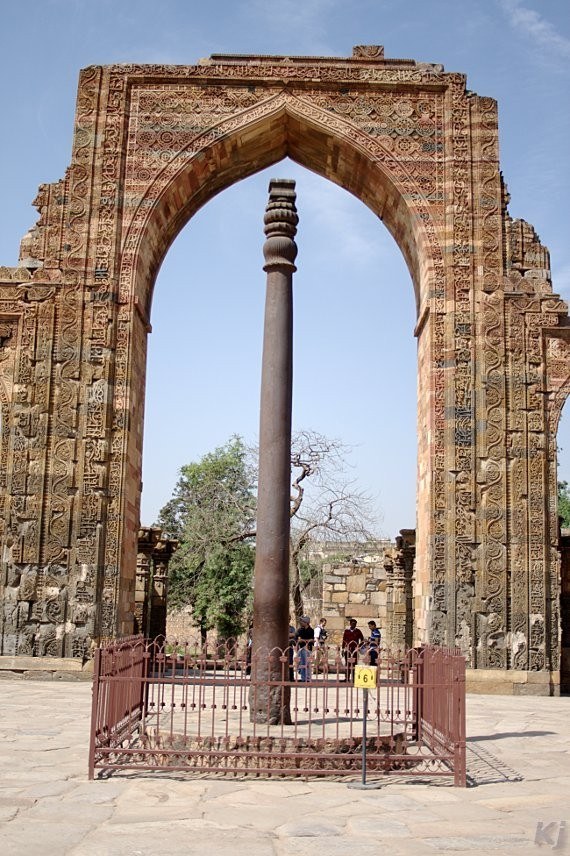 At a distance of 15 km from New Delhi Railway Station, The Iron Pillar is standing at the center of the Quwwat-ul-Mosque in the Qutub Complex.

The Iron Pillar dates back to around 4th century, which was erected for honouring Lord Vishnu and in remembrance of Chandragupta II Vikramaditya (375-413). Based on inscriptions and archaeological evidence, the Iron Pillar of Delhi was originally located in Udayagiri near Vidisha in Madhya Pradesh. It was brought to its current location in 1233 AD by Shams-ud-din Iltutmish during his invasion of Malwa. It was erected as a flag pole and it is still a mystery that how this pillar moved to the present location in Qutub Minar. The pillar also highlights ancient India's achievements in metallurgy.

This pillar is about 7.3 m tall and is made of 98% wrought iron, which has not rusted or decomposed for more than 1600 years. The decorative bell at the top end of the Iron Pillar presents a marvelous design. The next part of the structure is the slanted rod disc. The next three parts consist of rounded disc structures. While the top and bottom discs are semi-rounded, the middle disc, which is also the thickest of the three, is completely round in shape. The sixth portion is another plain disc on top of which rests the final structure, which is the box pedestal. It is believed that the purpose of the box pedestal was to serve as a platform for a figure.

There are Sanskrit inscriptions in Brahmi Script etched on the pillar, some mentioning the Tomar King Anang Pal & it is said to weigh more than six tons. There is a popular traditional myth that it brings good luck if one can circle & join one's hands with their back to the pillar. For centuries it is exposed to the Sun, rain, winds, extreme heat and cold, but it continues to successfully resist all signs of ageing and wear and tear.