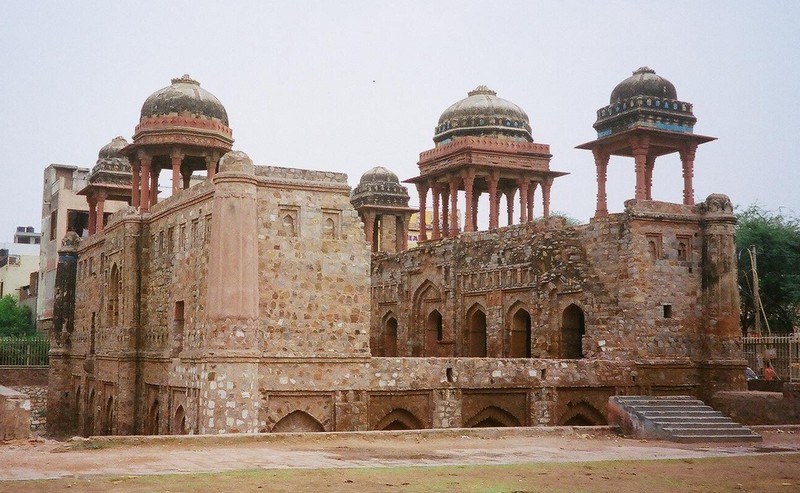 Travel Tips: This place is visited along with Qutub Minar (2.5 km)

At a distance of 18 km from New Delhi Railway Station and 2.5 km from Qutub Complex, Jahaz Mahal is situated on the northeastern corner of Hauz-i-Shamsi in Mehrauli, Delhi.

Jahaz Mahal was constructed in late 15th / early 16th century at the time of Lodi dynasty rule and the beginning of the Mughal Empire reign in Northern India. It is called Jahaz (ship) Mahal as it is located on the banks of Hauz-i-Shamsi and appears like a ship floating on the surface of the vast lake. The palace is said to have served the purpose of pilgrim's visiting Delhi.

Jahaz Mahal has a rectangular courtyard in the center and domed chambers on the sides beautifully decorated with several designs. The main features of the palace are its intricately carved chhatris and domed pavilion ornamented with blue tiles. The Jahaz Mahal was probably surrounded by a moat, but dried up completely. A flight of stairs on the southern end probably lead to Jahaz Mahal via a wooden bridge. The wooden plank of the draw bridge has long vanished and presently the entrance is through the Eastern side, where part of the moat is covered up to give access to the Jahaz Mahal. The encroachment all around the monument has completely destroyed the facade of the main entry on the east. Presence of a Mihrab on the western wall of Jahaz Mahal indicates that this part of the building was indeed a mosque.

Jahaz Mahal is the venue of the annual colorful festival of the Phool Walon Ki Sair or Sair-i-Gulfaroshan held in October. A procession of flower bedecked pankhas (fans) made and carried by the flower vendors starts from Mehrauli at the overflow outlet of the Hauz-i-Shamsi tank, called Jharna, stops at the Yoga Maya Temple for the first offering of the flower fan as mark of reverence, moves to the Jahaz Mahal and finally ends at the famous dargah of Hazrat Qutubuddin Bakhtiar Kaki for the presentation of the fans and chaddar at Kaki's dargah. The festival was started by Emperor Akbar Shah II in 1820. It was popularized by Emperor Bahadur Shah II. It was discontinued from 1942 for a time during the British period but was restarted in 1961 at the initiative of Pandit Jawaharlal Nehru. The three day festival is held at the Jahaz Mahal where elaborate cultural programs are organized.

Located next to the Jahaz Mahal is a huge lake called Hauz-i-Shamsi, dug out by Sultan Iltutmish in 1230. According to Legend, Iltutmish dreamt of the Islamic Prophet, riding a winged-horse, instructing the Sultan to dig a water tank at the spot he had appeared in. Next day Iltutmish visited the place and found the hoof marks of the Prophet's horse. Iltutmish had the tank dug and in the centre of the tank he made a pavilion housing the stone with the hoof marks of the Prophet's horse. Originally spread over an area of 4.9 acres, today the tank has shrunk in size. A domed pavilion stands on the South West corner of the lake.