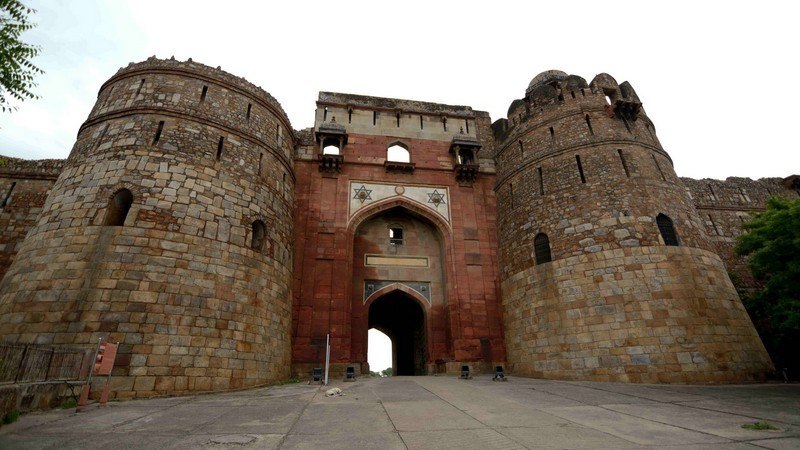 At a distance of 6 km from New Delhi Railway Station, Purana Qila or Old Fort situated at Pragati Maidan is one of the oldest forts in Delhi.

The Purana Qila was built by the Mughal Emperor Humayun from 1533 to 1538. Humayun Darwaza and walls of Purana Qila were built by Humayun. The Afghan ruler Sher Shah Suri defeated Humayun in 1540, renamed the fort as Shergarh and added several structures in the complex. According to the ASI excavations, the Purana Qila stands at the site of Indraprasta, the capital of the Pandavas.

The fort complex has walls measuring 18 m in height and 1.5 km in length. The fort has three main entrances, the Bara Darwaza which faces west and is used as the entrance to the fort even today. The South Gate is known as the Humayun Gate and the third gate is called the Talaqi Gate or the forbidden gate. All these gateways are beautifully decorated with tiles, marble inlays and pillared pavilions. The double-storied gates of the Purana Quila are quite massive and are built with red sandstone. Talaqi Darwaza and Humayun Darwaza are examples of the amalgamation of Hindu and Islamic architectural styles.

The fort is surrounded by a moat, which was fed by river Yamuna. The Sher Mandal and the Quila-i-Kunha Mosque are the notable structure inside the Fort complex. The Sher Mandal was built by Humayun. It is a two storied octagonal tower, used by Humayun as his library. The Quila-I-Kunha Mosque is an example of Indo Islamic architecture built by Sher Shah Suri in 1541 AD. The prayer hall of the Quila-i-Kunha mosque has five doorways with horseshoe-shaped arches. The mehrabs inside the Quila-i-Kunha mosque are richly decorated with concentric arches. There is also a Sher Shah Suri Gate or Lal Darwaza, Bhairav Mandir and Khairul Manzil inside the fort. Close to the Old Fort is a Lake, which has paddle-boating facility.

The Archaeological Museum is located inside the fort near the main entrance. Archaeological Survey of India carried excavations at the Purana Qila in 1955 and from 1969 to 1973. The excavations came up with items like pottery, antiquities, coins, jewelry, seals, rock edicts, remnants of old buildings and palaces, etc. One can also find fine arts, calligraphic works, costumes, maps, manuscripts and weapons displayed inside the Archaeological Museum of Delhi. This museum comprises of several artifacts dating back to 2nd and 3rd centuries.

Light and sound show in Purana Qila is organized by Delhi Tourism that depicts more than 5,000 years old history of Delhi. The show is held every evening in Hindi and English.

Timings of Sound & Light Show: 8.30 PM February to April, September and October; 9 PM May to August and 7.30 PM November to January.

Museum Timing: 9 AM - 5 PM, Closed on Fridays and government holidays.