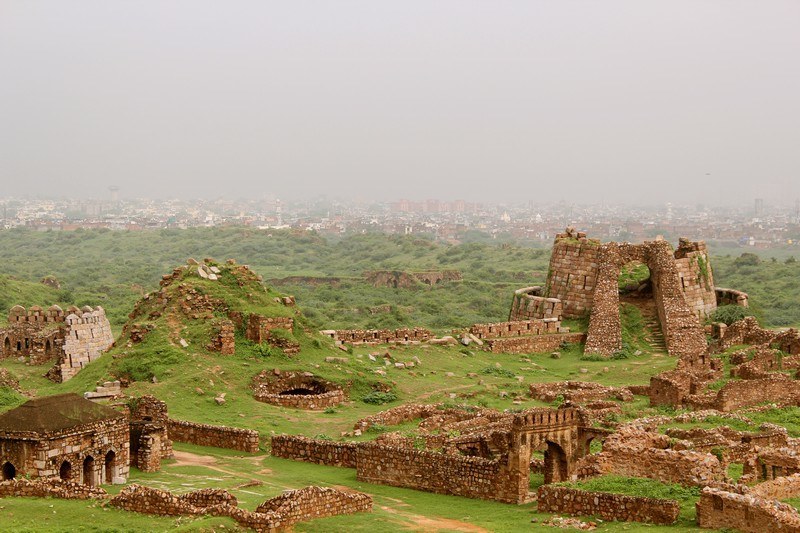 At a distance of 20 km from New Delhi Railway Station and 5 km from Tughlaqabad Railway Station, Tughlaqabad Fort is a ruined fort situated on the main Mehrauli - Badarpur Road in South Delhi. It is one of the ideal places to visit near Delhi for a day trip.

The Tughlaqabad Fort was built by the founder of the Tughlaq Dynasty, Ghiyas-ud-din-Tughlaq in 1321. Ghias-ud-din Tughlaq, also called as Ghazi Malik, was the slave who served Sultan Mubarak Khilji of Khilji Dynasty. Ghazi Malik drove away the Khilji ruler and built his city of Tughlaqabad and the fort. Established as the 3rd historic city, the fort was later abandoned in 1327 after a curse given by Nizamuddin Auliya.

The fort is divided into three parts, main city area with houses built along a rectangular grid between its gates, the citadel with a tower at its highest point known as Bijai-Mandal and the adjacent palace area containing the royal residences. The fortified city contained artificial lakes and other rainwater tanks. The Bijai-Mandal is the main attraction around the area. This is large tower which is situated inside the fort, along with remains of several halls. A long underground passage below the tower still remains.

The fort is an irregular rectangle gigantic stone structure, with walls that are 10-15 m high and covers an area of more than 6.5 km. Crowning the walls are battlement parapets and bastions. The fort city of Tughlaqabad was supposed to have as many as 52 gates, out of which only 13 remain now.

On the southern side of the fort is the tomb of Ghiyas-ud-din Tughlaq, which was built in 1325 AD by the ruler himself. The tomb is enclosed in a courtyard with fortified walls and a fine example of Indo-Islamic architecture. It is built with red sandstone and marble. The Tudor arch and Tartar dome with several beam and arch openings throughout the structure's interiors are some of the notable features of the monument. Originally it stood within an artificial reservoir and was connected with the fort by a causeway.

Inside the mausoleum are three graves, the central one belongs to Ghiyas-ud-din Tughlaq and the other two are believed to be those of his wife and his son and successor Muhammad bin Tughlaq. In the north-western bastion of the enclosure wall with its pillared corridors is another octagonal tomb in similar style with a smaller marble dome and inscribed marble and sandstone slabs over its arched doors. According to an inscription over its southern entrance this tomb houses the remains of Zafar Khan, a general of Allauddin Khilji.

Ghiyas-ud-din's successor, Muhammad bin Tughlaq (1325-51), added the small fortress of Adilabad on the hill south of Tughlaqabad fort which is worth visiting.