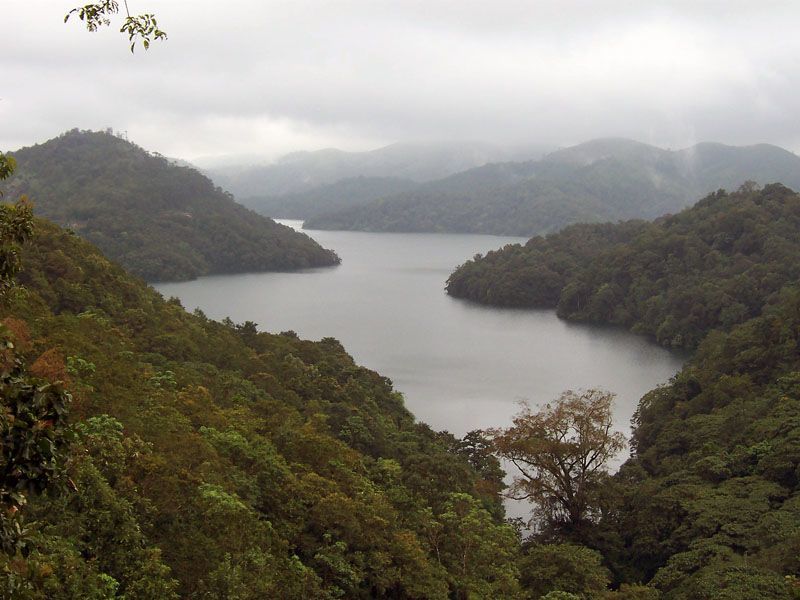 Best Time to Visit Idukki: October to May


At a distance of 47 km from Munnar, 101 km from Kottayam, 105 km from Kochi, 171 km from Madurai, and 239 km from Trivandrum, Idukki is a pristine hill station in Kerala. It is one of the stunning Kerala hill stations, and among the most prominent places to visit as part of Kerala packages.

Idukki district was formed on 26th January 1972 by carving out Devikulam, Peerumedu, and Udumbanchola taluks from Kottayam district and Thodupuzha taluk from Ernakulum district. It is the second-largest district in Kerala state (Painavu as headquarters). Idukki is home to a large population of tribal population. It is one of the famous hill stations near Kochi.

The name Idukki is supposed to be derived from the Malayalam word Idukku which means a narrow gorge. Periyar which is one of the largest rivers of Kerala, flowing through the Idukki gorge formed between the two high massive rocks called Kuravan and Kurathi, which is the site of the gigantic Idukki Arch Dam, among the must visit places as part of Idukki tour packages. Kulamavu Dam and Cheruthoni Dam are the other important dams in Idukki. Idukki can be called the Power House of Kerala as it caters to 66% of the state's Hydroelectric Power consumption.

According to History, Idukki was part of the Chera dynasty and was later ruled by the Kulasekhara Kings from the 9th to 11th century AD. John Danial Manroe, a British planter was leased a piece of land by the then Raja of Poonjar, Kerala Varma in 1877. Manroe has set up a Land Planting and Agriculture Society where the members were allowed to set up their own tea estates.

Idukki has a mix of diverse attractions like wildlife sanctuaries, hill stations, spice plantation centers and mountain treks. Idukki Wildlife Sanctuary, Idukki Dam, Thommankuthu Waterfalls, Ramakalamedu, Kalvari Mount / Calvary Mount, Malankara Dam, and Ilaveezha Poonchira are some of the prominent places to visit in Idukki. Idukki district is also home to South India's highest peak, Anamudi (2695 meters), along with 13 other peaks with a height of over 2000 meters. Idukki can also be visited along with Madurai tour packages.

Cochin Airport is the nearest airport, which is 94 km from Idukki, Kottayam Railway station, at a distance of 101 km from Idukki serves as the closest railway station. Being a major tourist destination in Kerala, Idukki is well connected by bus from Kochi, Munnar, Trivandrum, and Kottayam.

The best time to visit Idukki is between October and May while the peak season is from March to May. It usually takes 1-2 full days to explore this area.

How to Reach Idukki

How to Reach Idukki - Full Details

Top 10 Places to Visit in Idukki

At a distance of around 2 km from Idukki Bus Station, the Idukki Arch Dam is a double curvature arch dam located in Idukki, Kerala. It is the world's second and Asia's first arch dam, and among the prime places to visit as part of Idukki holiday packages.

The Idukki Dam was constructed in 1975 across the Periyar River in a narrow gorge between two granite hills locally known as Kuravan and Kurathi in Kerala, India. At 168.91 m, it is one of the highest arch dams in Asia. It is constructed and owned by the Kerala State Electricity Board. The Reservoir is formed by three dams, namely, Idukki, Cheruthoni, and Kulamavu. Together, the three dams have created an artificial lake that is 60 sq. km in area. The stored water is used to produce electricity at the Moolamattom Powerhouse, which is located about 43 km from Idukki Dam, among the prime Idukki tourist places.

At a distance of 10 km from Idukki Bus Stand, Kalvari Mount, also known as Calvary Mount is a mountain peak, and a popular Christian pilgrimage site situated in Idukki. It is one of the important places of sightseeing in Idukki.

Also known as Kalliyanathandu, Kalvari Mount is a stunning vantage point that offers an aerial view of the Idukki Reservoir and its surrounding peaks and forests. The viewpoint is situated near Thankamani Junction on Thodupuzha - Puliyanmala highway. It is one of the most scenic places that one must-visit during Idukki trip. During Lent, the area turns into a pilgrimage center as Christians go in a procession up the hillock.

It is also an ideal place for mountain climbers and trekkers. The trekkers will be treated to a fascinating experience of low-hung clouds, cool breeze, occasional chirping birds, and hordes of sauntering elephants. However, the hillock has a very steep slope and is mostly scaled by professional trekkers. The trekkers and travelers .....

At a distance of 36 km from Idukki, and 48 km from Kottayam, Ilaveezha Poonchira is a beautiful valley situated at Melukavu village in the Kottayam district of Kerala. It is one of the best places to visit near Idukki uring your Idukki tour.

The stunning valley of Ilaveezha Poonchira is spread across thousands of acres at the foot of three hillocks - Mankunnu, Kudayathur Hill, and Thonippara near Kanjar. During the monsoons, the valley between a complex of mountains fills up to form a large pond. Ilaveezha Poonchira means 'the pond of flowers where the leaves do not fall'. Legends say that the pool here was a bathing place for Draupadi, the legendary heroine of Mahabharata.

Surrounded by hillocks raised above 3000 feet from sea level, Ilaveezha Poonchira is an ideal place for trekking in Kerala. This is also one of the best places in Kerala to witness both the sunrise .....

At a distance of 20 km from Thodupuzha, 25 km from Idukki, and 48 km from Munnar, Thommankuthu is a mesmerizing waterfall located in Thodupuzha taluk in the Idukki district of Kerala, India. It is one of the stunning waterfalls near Kochi, ad among the must-visit places as part of Idukki tour packages.

Situated in the southern part of Western Ghats, Thomankoothu a series of 12 falls or kuthus (locally known) spread over an area of 5 km and fall from a height of 40 m. The 12 falls that vary in height and pass through the lush evergreen forests, present a remarkable sight. It is the best place to spend a day watching nature and drown in the waters of the falls.

The rich flora and fauna around the waterfall hypnotize the visitors. It is an alluring destination for trekking as it takes you through caves and sleepy hamlets of the tribals. There are also boating and fishing .....

At a distance of 40 Kms from Idukki, 38 Kms from Kumily, 57 Kms from Munnar, 15 Kms from Nadumkandam & 18 Kms from Kambam (on NH220 towards Palani), Ramakkalmedu is a lovely tourist place with rolling green hills and the fresh mountain air.

The hilltop also offers a panoramic view of the picturesque villages of Kambam and surrounding places on the slope of the Western Ghats. Kerala Tourism Department has provided additional facilities for tourists with resting points & statues of Kuravan & Kurathi (local tribes) at Ramakkalmedu.

Ramakkalmedu is also a great trekking destination. The view point on top of the hill is the highest point in this area, which can be reached by 3-4 Kms trek from the Ramakkalmedu Junction.

This place is connected by bus service from Munnar, Kottayam and Ernakulam.

At a distance of 4 km from Kumily, 54 km from Idukki, 82 km from Munnar, 111 km from Kottayam, 136 km from Madurai, 143 km from Kochi, and 211 km from Trivandrum, Periyar Wildlife Sanctuary is located at Thekkady in the Idukki district of Kerala. Located on Kerala - Tamilnadu border, it is one of the best wildlife sanctuaries in India, and also a well-known summer getaway in Kerala.

Thekkady is one of the most famous sanctuaries near Kochi, and also among the most scenic Kerala Backwater destinations. In 1899, the Maharaja of Travancore, Chithira Thirunal Balarama Varma has declared the forests around Periyar Lake as a private game reserve to stop the invasion of tea plantations. Further, in 1934, the lake reserve was converted into a game sanctuary, the Nellikkampatty Game Sanctuary, which covered an area of about 500 sq. km. It was established as Periyar .....

At a distance of 45 km from Thekkady, 58 km from Idukki, 76 km from Kumarakom, 64 km from Kottayam, 92 km from Munnar, 99 km from Alleppey, 103 km from Kochi, 181 km from Madurai, and 196 km from Trivandrum, Vagamon, or Wagamon is an enchanting hill station situated in Idukki district of Kerala. Located on the Kottayam-Idukki border, it is one of the offbeat hill stations in Kerala, and among the must-include places in Kerala Tour Packages.

Perched at an altitude of 1100 m, Vagamon is surrounded by 3 hills namely, Thangal hill, Murugan hill, and Kurisumala at the foothills of Western Ghats. Also known as the Scotland of Asia, Vagamon was discovered by the British who found the place ideal for tea plantations, and they were followed by Christian missionaries who built their abode of service at Kurisumala in Vagamon. National Geographic Traveler has listed Vagamon on their directory .....

At a distance of around 2 km from Idukki Bus Station, Idukki Wildlife Sanctuary is situated around Idukki Arch Dam. It is one of the prominent places of wildlife in Kerala, and among the must-include places in Idukki sightseeing packages.

The Sanctuary is spread over an area of 77 sq. km in Thodupuzha and Udumpanchola taluks. Established in 1976, the sanctuary is situated at an altitude of 450-748 meters above sea level occupying the forest land between the Cheruthoni River and the Periyar River. The terrain of the sanctuary is characterized by steep mountains, valleys and hills. The artificial Idukki Reservoir (Kizhakkilachimala Lake) adds to the scenic beauty of this lovely wildlife sanctuary.

Among the most-important tourist places in Idukki, the sanctuary is home to Elephants, bison, sambar deer, wild .....

At a distance of around 2 Kms from Idukki Bus Station and less than half Km from Idukki Dam, Hill View Park is a nice tourist place in Idukki that offers a panoramic view of the Dam and surrounding places.

Views of herds of wild elephants thrill any visitor. Spread over an area of 8 acres of land this aesthetically conceived park has a natural water body at the hill top, and boating facility is available here. The herbal garden and children's play area are added attractions.

At a distance of around 5 km from Idukki Bus Station, 53 km from Munnar, 107 km from Kochi & 130 km from Alappuzha, Painavu is a cute hill resort and also the headquarters of Idukki district. This is one of the popular weekend getaways from Munnar & Kochi.

Painavu is an important commercial center and a popular tourist hot spot in Idukki. At an altitude of 3,900 feet, Painavu is situated inside the Idukki Wildlife Sanctuary. It is also home to several State Government institutions such as Civil Station, and Government Engineering College, Idukki.

The place is popular for its pleasing ambience and picturesque location. This is a stopover for visitors, who travel to Idukki Arch Dam, Cheruthoni Dam and Kulamavu. Boats are available from here for cruises between Cheruthoni and Kulamavu. In winter and rainy seasons elephants can be spotted moving on the roads. Surrounded by pristine forests .....