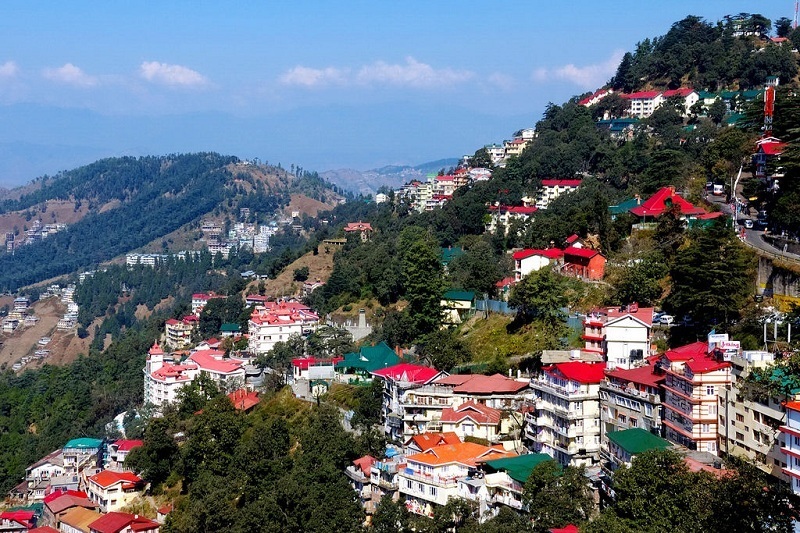 The beautiful Shimla derives its name from 'Goddess Shyamala', an incarnation of Goddess Kali. It was developed by the British and declaring Shimla as their summer capital. Covering the area of 18 sq km at a height of 7,238 ft. Shimla is surrounded by pine, deodar and oak forests. It's well developed facilities, easy accessibility and numerous attractions make it one of prime attractions of Himachal tour packages.

Kali Bari Temple, Annandale and Kalka - Shimla Railway are among the must include places in your Shimla tour packages. Besides being the ultimate summer retreat it remains an ideal spot for adventure sports. Tourists can go in for the various treks to the Kullu valley or indulge in trout fishing at the Pabbar River. The more adventurous may ski at the Narkanda and Kufri from January to mid-March. The nine-hole golf course at Naldehra is also a major draw for the tourists.

A narrow railway links Kalka with Shimla was built in 1924 and its toy trains still ply between the two stations passing through 105 tunnels and beautiful rail-road stations. This hill station amidst the lofty snow-clad Himalayan ranges surrounded by lakes and lush green pastures. The unique thing about Shimla is that it still retains its colonial charm.

Shimla is one tourist destination that can be visited any time during the year. The climate of Shimla varies from a maximum of 10-11 degrees in winter to a maximum of 25-26 degrees in summer. In spring we see flowers of all kinds, both wild and cultivated. During the monsoon, we see some of the best sunsets in the world. Summers are warm with cool and pleasant evenings while winters are bone chilling and the temperatures can fall below zero. But this difference is what makes Shimla all the more special.

How to Reach Shimla - Full Details

Top 12 Places to Visit in Shimla

At a distance of 2.5 km from Shimla Railway Station, Johnnie's Wax Museum is a new museum located near Willow Banks in Shimla, Himachal Pradesh. It is one of the interesting places to visit in Shimla as part of the Shimla Tour Packages.

Inspired by London's Madame Tussauds museum, the Johnnie's Wax Museum was opened in the year 2016 a Gurgaon based company 'BM Brothers' at the historic Willow Bank Estate in Shimla. It is the first wax museum in Himachal Pradesh. Johnnie's Wax Museum boasts on life-size statues of famous personalities in the world and offers equally fascinating and captivating traits like the Madame Tussauds museum in London. The unique feature of Johnnie's wax museum is that statues of the museum are made by the artists who designed the London wax statue of Prime Minister Narendra Modi.

Featuring around 16 wax statues of widely recognized people from different backgrounds, the museum displays the statue of Mahatma Gandhi at the entrance. Also, one can see .....

Annandale is a favorite spot for cricket and polo. Annandale is located in a deep wide valley in the suburban village of Kaithu, Shimla west. This playground rests on a small patch of table-land about a three-quarter of a mile in circumference. This place was named by Captain Charles Pratt Kennedy, one of the first incomers to the place.

It is quite a scenic spot as it gives a picturesque view of the Shimla city and its surroundings are occupied by deodar trees, oak trees, etc. Since the 1830s, Annandale has been an important centre of Anglo-Indian playful activities, amusement and entertainment. .....

Dorje Drak Monastery in Shimla is a famous tourist place in the city. It is a beautiful Buddhist monastery that displays the prevalence of Tibetan culture in the state. The monks meditating in the monastery is quite a sight to watch. The calm ambience of this place is a delight for people seeking moments of repose. Dorje Drak monastery is run by the Tibetan exiles.

The Monastery is one of the biggest monasteries of the Nyingmapa School. His Highness Kyabje Taklung Tsetrual Rinpoche who is the head of Dorje Drak monasteries in India decided to set up this temple at Shimla after he migrated from Tibet in 1959. The Solid Square and rectangular structure of the monastery is a perfect example of Buddhist architecture in the Himalayan Region. After the destruction .....

At a distance of 2 km from Shimla Railway Station and 3 km from Shimla Old Bus Stand, Vice Regal Lodge also known as Rashtrapati Niwas is located on the Observatory Hills of Shimla, Himachal Pradesh, India. The lodge is one the best places to visit in Shimla city. It was formerly the residence of the British Viceroy of India Lord Dufferin.

The Vice Regal Lodge was designed by British architect Henry Irwin and built in the Jacobethan style during the regime of Lord Dufferin. Its construction was started in 1880 and completed in 1888. Only the local woods like pine and cedar were used to construct this marvel. Vice Regal Lodge is the only building of Shimla that occupies an entire hill by itself. The building now serves as the center for the Indian Institute of Advanced Study (IIAS).

The entrance opening to South leads one to the reception hall which stands adorned by a splendid fireplace and a grand spiraling staircase. The building .....

According to mythology, a deadly arrow injured Lord Rama's brother Lakshmana when he was fighting the battle with the demon king Ravana. In order to save his life, when lord Hanuman was moving towards Himalayas to get Sanjeevani herb. Upon reaching the Himalayas, Hanuman couldn't make out as to which herb was the Sanjeevani. So he dug up the entire mountain and flew back to where Lakshmana was lying injured.

After Lakshmana was cured, Hanuman went back to place the mountain in its original site. He rested on top of the Jakhu hill for some time. .....

At a distance of 1.5 km from Shimla Railway Station and 1 km from Shimla Old Bus Stand, Kali Bari Temple is one of the popular pilgrim centers and famous tourist places to visit in Shimla.

The Temple of Kali Bari was constructed in 1845 by Ram Charan Bhramachari, a Bengali Brahmin on Jakhu Hill. This is one of the oldest temples in Shimla and is held in high veneration by the town's Hindu community. Later the British rulers relocated the temple to the present site. The temple is dedicated to Goddess Kali who is locally known as 'Shyamala'. The name Shimla is said to have originated from the name 'Shyamala'. The original temple belonged to goddess Shyamla-which was converted into Kali Bari by some Bengali devotees.

A blue wooden idol of Goddess Shyamala at an original altar was installed by some Bengali devotees. Along with the rituals the Kali Bari provides .....

Built by the British during the colonial rule in India, the Mall Road was constructed keeping in mind the traffic on this route. Entry of vehicles was banned though cycle rickshaws were allowed. It has been built in a very strategic and planned way. The Mall road is located a level below the ridge. The offices of Municipal Corporation, fire service and police headquarters are located here.

The Mall Road also has all major hotels, restaurants and recreation centers of Shimla. The Mall road is full of shops that sell woolen clothes, branded clothes, handicraft .....

At a distance of 17 km from Shimla Railway Station, Tara Devi Temple is situated near Shogi village on Shimla - Kalka National Highway. The temple is famous for it's breathtaking location and beautiful valleys around the hill. The temple is one of the top pilgrimage sites and also a popular place for sightseeing in Shimla

The Temple is dedicated to Goddess Tara (goddess of stars) and stands on Tara Devi hilltop lies at an altitude of 1851 m above sea level between Shimla and Shoghi and is a very popular visiting spot for tourists and devotees. The lush green environs surrounding it give the temple a very peaceful and tranquil atmosphere.

According to the legend, Goddess Tara Devi idol was brought to Himachal Pradesh from West Bengal. The history of this temple dates back to about 250 years when this temple was built here. Hundreds of years ago a king from the Sen Dynasty visited this area. He was in the habit of carrying his personal .....

At a distance of 2 km from Shimla Railway Station and 1.3 km from Shimla Old Bus Stand, Christ Church Shimla is the second oldest church in North India. The majestic appearance of the church and its stunning location makes it one of the top places to visit in Shimla.

The church was designed in neo-gothic style in 1844 by J.T. Boileau but it was consecrated after 1857. The Christ Church is situated on The Ridge where is stands out as one of the prominent landmarks of Shimla. Colonel Dumbleton in 1860 donated the giant round clock that adorns the front facial of the church. The porch was added to the structure in 1873. It started as a shrine to serve the Anglican British community in Shimla and hence is considered as one of the most visited places of worship in the country's most celebrated hill town. It is governed under the diocese of Amritsar belonging to the Churches of North India.

Several major places of Shimla like Lakkar Bazaar, Mall, Scandal Point, Jakhu Hill, etc. are connected through the Ridge. The movement of vehicles is strictly prohibited here. The Ridge in Shimla always remains crowded with hundreds of people. Tourists from all over the country visit this awesome place for the view of the sunset.

The Ridge at Shimla also provides the tourists a view of the age old Christ Church built in the Neo-Gothic style of architecture as well as the new Tudor library. The statue of YS Parmar .....

At a distance of 84 km from Shimla, Kalka is a town located in Haryana State. Kalka Railway Station is the northern terminus of the Delhi-Kalka line and the starting point of the legendary Kalka-Shimla Railway. This railway was added to the UNESCO world heritage list in July, 2008. A ride in the toy train is one of the top things to do in Shimla and it is extensively used in promotion of Himachal tourism.

The Kalka-Shimla Railway was built by the British in 1903 to provide access to their summer capital of Shimla. The distance of 96 km between Shimla and Kalka passes through 102 tunnels, 864 bridges and an incredible 900 curves. There are more than 20 stations in this route. It connects Kalka at an altitude of 656 m to Shimla at 2076 m. The five hour journey is one of the best train journeys operated by Indian Railway. .....

At a distance of 16 km from Shimla Railway Station and 5.6 km from Fagu, Kufri is a small hill station in Shimla district, positioned at an elevation of 2,510 m on the National Highway 22. Kufri is quite famous for the popular ski resort. It is one of the best places for skiing in Shimla and also one of the top adventure site and skiing destinations in India. Kufri is also one of the best places to experience the Tourism in Himachal and another popular attraction not to miss in a Shimla tour package.

Kufri derives its name from 'Kufr' which means lake. It is especially popular among trekkers and it is a popular place for adventure sports in Himachal Pradesh. The British discovered it in 1819. As Shimla gained importance, Kufri also began to be recognized as an important place to visit near Shimla as part of honeymoon tour.