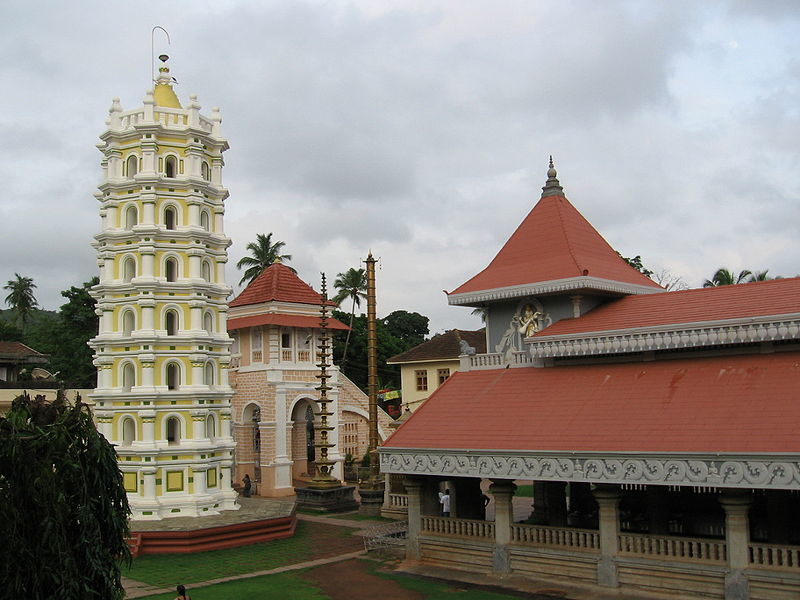 The Mahalasa Temple located at Mardol in Ponda is one of the most famous temples in Goa. It is also known as the Shri Mahalasa Narayani Temple and is dedicated to the Goddess Mahalasa. She is worshipped in two distinct traditions. As an independent goddess, she is considered as a form of Mohini - the female avatar of the god Vishnu and is called Mahalasa Narayani. Mahalasa is also worshipped as the consort of the folk god Khandoba an incarnation of god Shiva. In this tradition she is associated with Parvati, Shiva's wife as well as Mohini.
According to the legend, the presiding deity Goddess Mahalasa once appeared to a cattleman on the Sonsada plateau at Verna. Asked to go and fetch his master by the goddess, the petrified cattleman is said to have tried to escape his difficult situation by lying that the cattle were thirsty and had to be watered. The goddess is said to have then touched the ground with her ankle ornament creating a spring, which can be seen today as the Lake Nupur. Eventually, only the master's son-in-law could be summoned and was asked by the goddess to construct this Temple at the spot that she appeared.

This deity was originally located at a temple in the Salcete taluka. And then a small temple was built at Verna. Later when Portuguese conquered Goa the temple was again relocated in Mardol next to Shri Santeri Temple. This beautiful temple was constructed in 1567. Its courtyard is dominated by a seven storied deepmal or lamp tower. A huge 'Deepstambha' made of five metals, which was built in the 17th century. This splendid pillar is 40 feet in height and has 21 rings of a hundred fifty small lamps. It is thought to be the largest lamp of its kind in India. The lamp is lit on every Sunday evenings. The inner hall of the temple has carvings of the 10 incarnations of Lord Vishnu that have been stunningly painted. An elaborated silver frame adorns the doorway to the sanctum. The pillars outside the temple are also exquisitely carved. Behind the temple is a large laterite-lined water tank overlooked by a large sacred Peepal tree.

Jatra Mahotsav (Magh Mahotsav) is a popular festival celebrated at Mahalasa Temple. Held in February, it is also called the Mardol Jatra. Apart from the Jatra, the Jaiyanchi Puja held in August and the Kojagiri Pornima are two other special occasions.