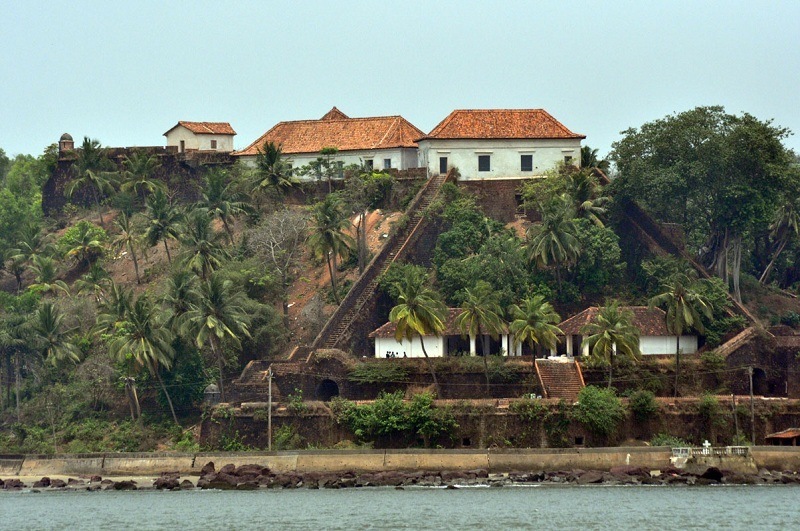 At a distance of 7 km from Panjim Kadamba Bus Stand, 34 km from Vasco Da Gama Railway Station and 15 km from Mapusa, Reis Magos Fort is located on the northern bank of the River Mandovi across to the city of Panaji in North Goa. This Fort is one of the prime Goa Tourist Places and one of the major heritage sites in Goa state.

This Fort was built by the Portuguese Viceroy Alfonso de Noronha in 1551 and was rebuilt in 1707. It was played an important role in the defense of Goa in 1739 against the Marathas. Originally it was an armed outpost built by the Adil Shah in the late 1400 and got destroyed in 1500. In the beginning the Portuguese used this Fort as a shelter for the viceroys and dignitaries who arrived from Lisbon. But gradually Portuguese realized the strategic importance of this Fort and used it to ward off Maratha armies.

This Fort is quite small compared to other forts in Goa. It was used as a residence for viceroys and later converted to a fortress. It was occupied briefly between 1798-1813 by the British Army. It was subsequently abandoned by the military and served as a prison until 1993. The Fort is currently undergoing a restoration by the archeological survey of India.

This Reis Magos Fort was constructed using laterite and is located on a hill that can be accessed through a ramp or a narrow staircase. From the Fort one can obtain a beautiful view of the River Mandovi. The other features of the Fort are the high sloping walls, underground rooms, passages, cylindrical turrets looking out towards the Mandovi River. The water supply provided to the Fort from a fresh water spring which is situated within the Fort. The Fort has been well preserved and was defended by 33 guns and a small military troop.

Located close to the Fort is the Reis Magos Church, the first church of Bardez. This church is well known for the colorful 'Fiesta dos Reis Magos' which is the Feast of the Three Wise Men. The feast is held on 6th of January every year.