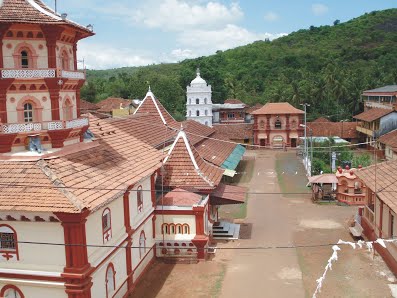 Travel Tips: This place is usually visited from Rachol Seminary and Church (12.4 Kms)

At a distance of 37 km from Panjim Kadamba Bus Stand, 32.7 km from Vasco Da Gama Railway Station and 19 km from Margao Railway Station, Shri Kamakshi Temple is situated in North Goa.
The temple of Shri Kamakshi is set amidst hills in the picturesque village of Shiroda of Ponda Taluka and was built in the late 16th century. This temple is dedicated to Goddess Kamakshi an incarnation of Goddess Parvati consort of Lord Shiva.

According to mythology, Shri Kamakshi idol at Shiroda was brought from Guwahati in Assam, where she is known as Kamakhya and which is her original abode. The original temple of Shri Kamakshi was located in Raia in the Salcete Taluka. The deity was shifted to Shiroda between 1564 and 1568 because as a part of Goa Inquisition the Portuguese rulers demolished almost all the Hindu shrines. It is believed that a potter from the Raia accompanied by some worshippers of the deity smuggled the idol of Goddess Kamakshi across River Kushavati to safety in the Shiroda village. The new temple is located at Shiroda.

A huge Mahadwar leads to the Kamakshi temple complex known as Thal. After passing under the Mahadwar the temple crowned by an octagonal two-storied tower with a golden Kalash perched on its peak can be seen prominently. The temple faces east and has a large Sabha Mandap. The temple has a tall Deepasthambha and a holy water tank. Inside the temple, there is a square shaped chowk and the Sanctum Sanctorum with the deity Shri Kamakshi in all splendors. The other deities in the temple complex are that of Shree Shantadurga, Shree Laxmi Narayan and Shree Rayeshwar (Shiva).

A Palakhi procession of Goddess Kamakshi is held on every Shukla Panchami. The annual festivities are held at the temple during the Dussehra period and at the time of Jatra in spring. The Divja procession held during the Jatra wherein countless married women walk around the temple in the evening holding Divja or clay lamps offers a spectacular site.