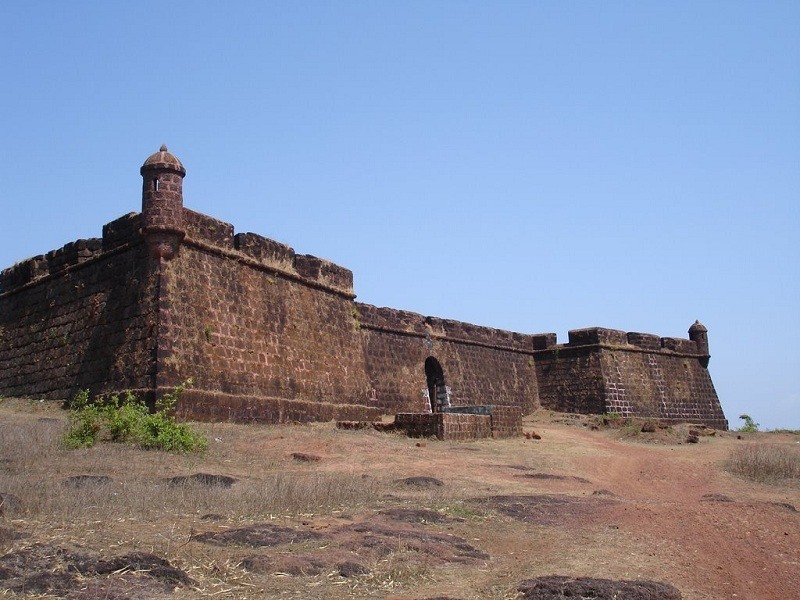 At a distance of 22 km from Panjim Kadamba Bus Stand, 49 km from Vasco Da Gama Railway Station and 12 km from Mapusa, Corjuem Fort is a fortress situated 4 km from Aldona on the island of Corjuem in North Goa.

Corjuem Fort is also known as Khorjuem Fort. It is smaller than the other forts in Goa, but it gives a good view of the surrounding river and land. According to late Father Moreno de Souza the island name originates from Khor as in khorik which means deep or lower and Zunvem which means island.
The Corjuem Fort was constructed in the year 1551. The fort is a relatively small fort and is square shaped. The walls are wide and have numerous gun ports and murder holes. At each corner of the fort is a ramp like stair that leads to the ramparts. The Fort has a well and a three room living quarters. The chapel of St. Anthony was earlier known to have been in the Corjuem Fort.
The Corjuem Fort was protected by the Portuguese from the Marathas, Bhonsles and the Rane Rajputs in the 19th century. This Fort is also associated with a Portuguese lady soldier named Ursula e Lancaster, who tried to make it big in a man's world. She disguised herself as man and joined the army. Finally her secret was discovered when she was captured and stripped. But the woman was in a different league, she ended up marrying the captain of the guard.

The Fort is surrounded by lush greenery and one can get a full view of beautiful villages and islands nearby. The Fort is built out of pitted laterite stones. In the early 1800s, the Fort was used as a Military School and had in its defenses a battery of four guns. The fortress defended the town of Corjuem and also had a chapel under parochial church of Aldona. Corjuem is well connected with Aldona by a cable suspension bridge which is a major source of attraction and it is the only suspension bridge in Goa.

The Corjuem Fort is now in ruins only the Fort walls are in a good shape. There is no entrance fee.