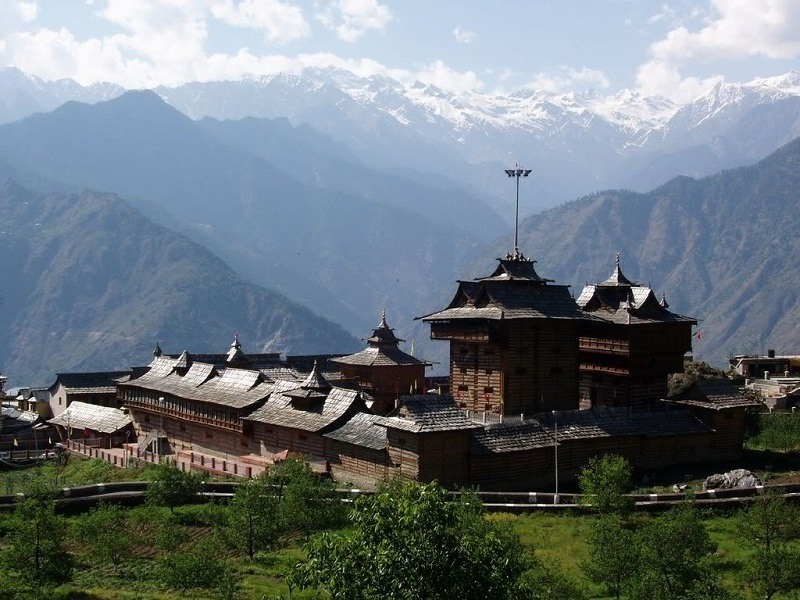 At a distance of 165 km from Shimla, Bhimakali Temple is located at Sarahan in Himachal Pradesh. The famous Bhimakali Temple in Sarahan is a very popular pilgrimage site in Himachal state. This temple is 800 years old and it is regarded as one of the 51 sacred Shakti peethas. This temple is dedicated to Goddess Durga known locally as Bhimakali. This is one of the top attractions you must include in Shimla packages.

According to one legend, during Daksha Yagna, the Ear of Sati Devi fell here when Lord Vishnu cut the pieces of her body carried by heartbroken Lord Shiva. Other legend states that this area was under the rule of Demon called Banasura, the great grandson of king Prahlad an ardent devotee of Lord Vishnu. Due to Usha-Anirudh affairs Lord Krishna fought here with him and in this battle Lord Siva stood against the former. The legend goes that head of the defeated king Banasura was buried in front of the entry gate now marked as a raised platform to the first courtyard. After Banasura, Pradyumna son of Lord Krishna ruled this area. Then the ruling king constructed this temple recognizing Devi Bhimakali as presiding deity of this area.

The temple is in Tibetan architectural style with Buddhist and Hindu influences and bronze statues of both religions in the shrines. This feature is not visible at any of the temples in this hill state. It has slanted slate roofs, golden towers, pagodas and a carved silver door. The palaces of the royal family are adjacent to the temple.

An idol of eternal goddess at Sri Bhimakali Temple represents the virgin and it lies at the top storey of the temple building. Below that storey goddess Parvati has been enshrined as the divine consort of Lord Shiva. There are three other shrines in this complex as well Lord Raghunath, Narsingh and Patal Bhairava.

The present Bhimakali Temple is a new one, built in 1927. The old temple nearby has a fascinating story to it. It got tilted slightly in the 1905 earthquake and then miraculously straightened back with a subsequent tremor. It is said that the foundations of this temple are very deep and that there is a disused tunnel that connects this to the village of Ranwin, a kilometer away. Priests would enter and leave the temple through this secret passage.

Dussehra is celebrated in a grand way at both the Bhimakali Temple and in the village of Sarahan with animal sacrifice playing a big role in the festivities.