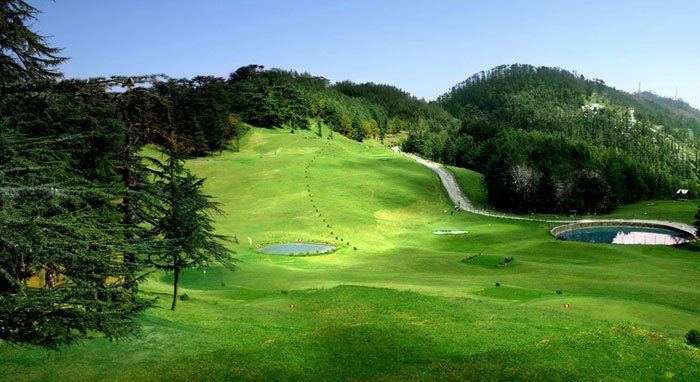 At a distance of 25 km from Shimla and 13 km from Mashobra, Naldehra is a picturesque hill station situated at an altitude of 2044 m above sea level. This is one of the top Tourist places in Himachal.

Naldehra is famous for its beautiful natural surroundings including lush green valleys and magnificent mountain peaks and fresh water springs. Naldehra derives its name from Nag and dehra meaning the abode of the King of Snakes. The Mahunag temple dedicated to the Serpent Lord is one of the most well known religious shrines of the region.

The most famous attraction of Naldehra hill station is the 18 holes golf course that is considered to be the most challenging golf course. The golf course was built under the supervision of Lord Curzon, the then Viceroy of India in the early 1900s. Initially a 9 Hole Course, it was expanded to 18 holes. Maintained and run by Himachal Tourism, it is well groomed golf course and perhaps one of the finest in India. This course is the venue for many competitions every year. The best season for golfing in Naldehra is from April to October.

Naldehra attracts a large number of adventure lovers offering rafting and trekking escapades. The river water rafting in Chabba is one of the most popular tourist attractions in the region. Naldehra is dotted with several attractions which include temples, lakes, hot water springs, scenic beauty and golf course. Tattapani is famous for its hot water springs, which contains Sulphur.

One of the most famous fairs of Naldehra is Sipi fair held every year during the month of June. Also the annual Jotton Ka Mela (bull fight fest) in October is also held.