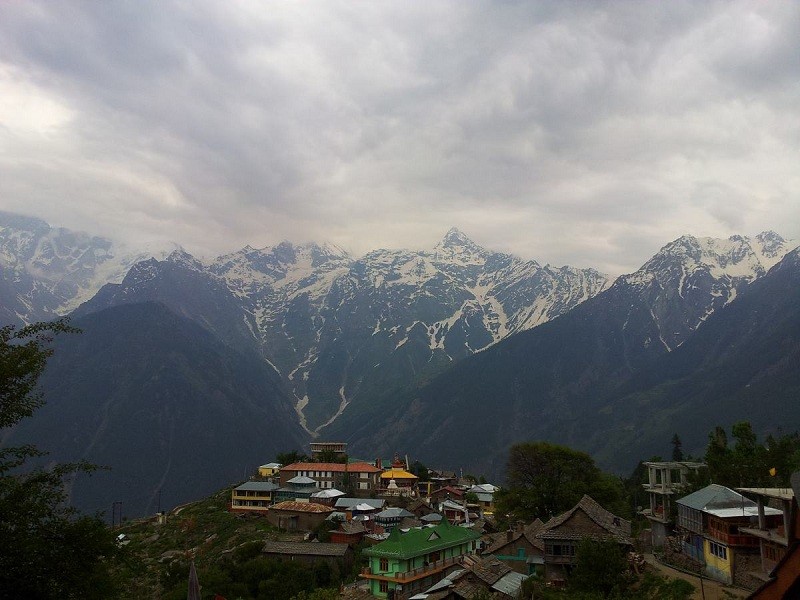 Best Time to Visit Narkanda: November to May

At a distance of 47 km from Kufri, 60 km from Shimla, 132 km from Kasauli, 163 km from Kullu, 167 km from Chandigarh, 171 km from Mandi, 201 km from Manali, 285 km from Dehradun, 341 km from Rishikesh, and 414 km from New Delhi, Narkanda is a quaint little hill town in Shimla district of Himachal Pradesh. Situated on the India - Tibet Road, it is one of the offbeat hill stations in Himachal Pradesh, and among the must-visit tourist places near Chandigarh.

Situated at an altitude of 8600 ft, Narkanda is surrounded by tropical forests and the mighty Shivalik Range. This opulent town is known for its exquisite natural beauty with scenic views of snow-clad mountains, and dense forests. The area around Narkanda is also called the orchard region of Himachal, where cherry, apple, etc. are grown abundantly. Narkanda is popularly known as the 'Getaway to Apple Country' as it connects to Thanedar, the main apple belt of Himachal Pradesh where Satyananda Stokes started the apple cultivation. It can be visited along with Shimla tour packages.

Narkanda is an ideal getaway for photography enthusiasts and those who want to relax in an undisturbed and tranquil location, far away from the bustling city life as part of Himachal tour packages. The astounding lakes, peaks, and awe-inspiring meadows of Narkanda leave their mark on the mind of a traveler. Tani Jubbar Lake is one of the most important tourist attractions here. There also exists a temple near the lake which is a must-visit for all tourists and devotees coming here. Stokes Apple Farm, Hatu Temple, Hatu Peak, Mahamaya Temple, Kotgarh, and Thanedar are the other famous places to visit in Narkanda.

Surrounded by forests and woodlands, Narkanda is famous for Skiing and Winter sports. The slopes of the hill town are perfect for the skills of beginners as well as experienced skiers. The skiing at Narkanda was started in 1980 and since then HPTDC is conducting skiing courses every year. Today it is one of the most well-known ski resorts in India. During winter, the slopes come alive with skiers. Towering at 3400 m, Hatu Peak is one of the popular ski slopes in Narkanda. Besides, the place also has various trekking routes and rock climbing opportunities which all adventure-seekers should go for as part of their Narkanda tour packages.

About 82 km from Narkanda, Shimla Airport at Jubbarhatti is the nearest airport that has well-connected flights to Kullu and Delhi. Chandigarh Airport is also a good option which is about 176 km away from Narkanda. Shimla Railway Station is the nearest railhead which is about 62 km from Narkanda. However, Shimla has a narrow-gauge railway and only a toy train from Kalka comes to Shimla, though the route itself is stunning and also part of the UNESCO World Heritage Sites. Kalka is the major nearest railhead which has direct trains from Delhi, Chandigarh, Mumbai, Shirdi, Ambala, and Vaishno Devi Katra. From there, buses and taxis are easily available for reaching Narkanda. Narkanda Bus Station is the nearest bus stand that has well-connected buses from Rampur, Kinnaur, Kufri, Matiana, Theog, Fagu, New Delhi, Shimla, and Kalka.

There are a lot of hotels in Narkanda and you will have no problem finding a place to stay. There are several cottages, guest houses, and star hotels available in Narkanda to stay and explore nearby places. However, visitors need to book the hotel in advance as a lot of people visit here during January and February for skiing. One may also visit Narkanda as a day trip from Shimla.

Winter, which lasts from November to February, is the peak season in Narkanda as it serves as an idyllic hub for skiing in the lap of the Shivalik Ranges. Winters in Narkanda are cold and covered in snow, and the town is flooded with skiing enthusiasts during this time. If you are not a cold-loving person, then summer is the best time to visit Narkanda when the weather is delightful and suitable for sightseeing and trekking.

How to Reach Narkanda - Full Details

Top 10 Places to Visit in Narkanda

#1 of 8 Places to Visit in Narkanda

At a distance of 1 km from Narkanda Bus Station, Narkanda is well-known for its numerous ski slopes. Skiing is one of the most popular things to do in Narkanda.

Situated at an altitude of 8100 feet, Narkanda is located on the India - Tibet Road. Surrounded by forests and woodlands, Narkanda is famous for its natural beauty as well as Skiing and Winter sports. The slopes of the hill town are perfect for the skills of beginners as well as experienced skiers. The skiing at Narkanda was started in 1980 and since then HPTDC is conducting skiing courses every year. Today it is one of the most well-known ski resorts in India. During winter, the slopes come alive with skiers. Towering at 3400 m, Hatu Peak is one of the popular ski slopes in Narkanda, and among the must-visit places as part of Narkanda holiday packages.

#2 of 8 Places to Visit in Narkanda

At a distance of 7 km from Narkanda Bus Station, Hatu Peak is a mountain peak located in Narkanda. It is one of the highest peaks in Himachal Pradesh and among the significant Narkanda places to visit for skiing lovers and trekking enthusiasts.

Located at an elevation of 3400 m above sea level, the Hatu Peak is the highest peak in the Shimla district of Himachal Pradesh. The peak is a paradise on earth as it is surrounded by the snowcapped Himalayas and dense forest. The forest is a mixed one, comprising a varied population of deodar, fir, spruce, cedar, and blue pine. For the rulers of the erstwhile hill states, Hatu Peak was of great strategic importance because of its commanding position and was accepted as a boundary between the states. The Gorkhas captured it early in the 19th century and established a fort at the top of Hatu Peak. Later, the British dismissed them from the Hatu heights.

#3 of 8 Places to Visit in Narkanda

At a distance of 15 km from Narkanda and 77 km from Shimla, Kotgarh is a quaint hill town situated in the Shimla district of Himachal Pradesh. Located on the old Hindustan-Tibet road, it is regarded as the apple bowl of India and among the offbeat destinations to visit as part of the Narkanda sightseeing packages.

At an altitude of 6,500 feet, Kotgarh, located on the left bank of river Sutlej, is an ancient valley famous for its U shape and acres of apple orchards. The small hamlet of Kotgarh is also known for its scenic beauty and enchanting views of the snow-covered mountains of the mighty Himalayas from the Kotgarh Valley. The famous writer Rudyard Kipling, in one of his short stories named 'Lispeth', called Kotgarh the 'Mistress of the Northern Hills'.

In the early 19th century, Kotgarh provided one of the playing fields for the war games between the states of Nepal, Kangra, Kullu, Punjab, and the then-ascendant British .....

#4 of 8 Places to Visit in Narkanda

At a distance of 10 km from Narkanda Bus Station, Tani Jubbar Lake is a beautiful lake located at Tani Junnar near Narkanda, Himachal Pradesh. It is one of the picturesque lakes near Shimla, and among the best Narkanda tourist places.

Enclosed by a thick forest of cedar trees, Tani Jubbar Lake is a small oval-shaped artificial water-fed lake. The shallow water body is encircled by a paved pathway, flanked by gentle slopes, covered with pine and spruce trees. There is a small temple dedicated to 'Nag Devta', the God of Snakes, on the banks of the lake. The shrine is much revered by the locals as well as people from the surrounding areas. The colorful fair of Tani Jubbar is celebrated annually at Tani Jubbar Lake.

The lake is a perfect place where one can lay back, relax and enjoy the weather as part of Narkanda trip. The dramatic foliage encircling .....

#5 of 8 Places to Visit in Narkanda

At a distance of 16 km from Narkanda, Stokes Farm is an apple orchard located at Thanedhar in Himachal Pradesh. It is the oldest apple orchard in Shimla district and among the top places to visit in Narkanda.

Stokes Farm is located in Thanadar village and is world-famous for its magnificent apple orchards. Mr. Satyanand Stokes an American who later on settled in India started apple cultivation in this region in 1916. He came to India on a leprosy mission in 1904 and was advised to recover in Kotgarh near Thanedar in Himachal when the heat of the plains got to him. With time to kill, he experimented with planting the apples. The success of his efforts transformed the economy of the state and today Himachal Pradesh has become a significant exporter of apples.

The mysteriously attractive Stokes Farm is spread over a vast land and is famous for a wide variety of apples including the famed golden apples, red delicious, and royal delicious. Today, this farm provides livelihood to .....

#6 of 8 Places to Visit in Narkanda

At a distance of 112 km from Chandigarh, and 348 km from New Delhi, Shimla is a mesmerizing hill station in Himachal Pradesh. Often called the 'Queen of Hills', Shimla is the capital city of Himachal Pradesh, and one of the top tourist places in India.

The pristine hill station of Shimla derives its name from 'Goddess Shyamala', an incarnation of Goddess Kali. It was developed by the British and declaring Shimla as their summer capital. Covering the area of 18 sq. km at a height of 7,238 ft. Shimla is surrounded by pine, deodar, and oak forests. It's well developed facilities, easy accessibility and numerous attractions make it one of prime attractions of Himachal tour packages.

#7 of 8 Places to Visit in Narkanda

At a distance of 40 km from Kullu, 255 km from Shimla, 295 km from Chandigarh, and 545 km from Delhi, Manali is a breathtakingly beautiful hill station nestled in the mountains of Himachal Pradesh near the northern end of the Kullu Valley. Kullu Manali is one of the top hill stations in India, and among the top tourist places in Himachal.

Manali is renowned for its snow-covered mountains, scenic beauty, history, and culture. It is located at an altitude of 2050 m and is spread along the banks of the river Beas. Often referred to as the 'Valley of the Gods', Manali is one of the popular places to visit near Delhi. Naggar Castle, Hidimbi Devi Temple, and Rohtang Pass are among the must include places in Manali tour packages.

Manali is named after the Hindu lawgiver Manu. The word Manali .....

#8 of 8 Places to Visit in Narkanda

At a distance of 259 km from New Delhi, 113 km from Shimla, 165 km from Dehradun, 199 km from Mussoorie, 200 km from Haridwar, 230 km from Amritsar and 510 km from Jaipur, Chandigarh is the first well-planned city in India that serves as the capital of the Indian states of Haryana and Punjab. It is the dream city of India's first Prime Minister, Pandit Jawaharlal Nehru. It is the main hub from where tourists travel to the Shimla and Kullu-Manali region.

The name Chandigarh derived from the temple of Chandi Mandir, an ancient temple devoted to Hindu Goddess Chandi, near the city. According to early history, the area was first inhabited by the Harappans, the earliest civilizations, around 8000 years ago. It was a prosperous place during medieval times and a part of the Punjab Province. During the partition of India, the state of Punjab was split between Pakistan and India. The older capital city Lahore was in Pakistan, so, Chandigarh .....