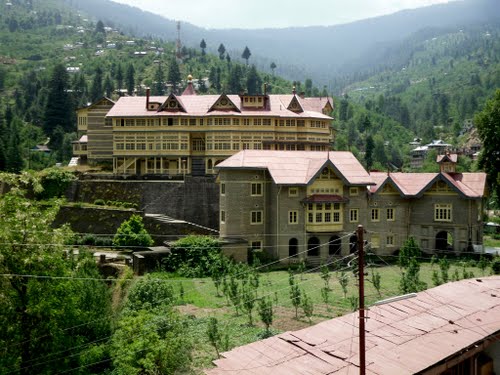 At a distance of 90 kms from Shimla & 76 km from Kufri, Jubbal Palace is among the most prominent places to see in Jubbal. The Palace situated at an altitude of 7000 ft above sea level is one of the popular heritage sites in Himachal state.

Designed by a French architect in 1930, the Palace architecture is a blend of Chinese, Indian and European styles. The Jubbal Palace is colored in cream hue and is admired with sloping roofs and red chimneys. The lower portion of the Palace known as Rana's abode consists of sandstone and is noteworthy for the vast stacks of deodar timber used in its structure. The modern wing of the Palace has an Indo-European design and feel with convoluted wooden ceilings and the works. The deodar wood from the surrounding forest was used for the construction of the Palace structures. Another beautiful aspect is the stunning display of the collection of ancient guns used by the royal families of Jubbal. In the interiors, visitors will find intricately carved structures of timber, suspended attics and signed photographs and paintings of eminent people.

The present Palace is an impressive structure. The main entrance to the Palace is through a massive wooden door about 18 ft high and 7 ft wide. It is covered with copper and studded with coins. Old furniture and other artifacts and a rich library with a choice collection of Sanskrit and Persian books are some of its other attractions besides the beauty of the Palace. The Palace is spread over 4 acres of land and is surrounded by towering pine and deodar forests.

The royal family of Jubbal lived here until 1977 when Raj Kumar Uday Singh, grandson of Raja Rana Sir Bhagat Chand converted a part of this Palace into a heritage hotel. Visitors are allowed to capture pics of the palace.