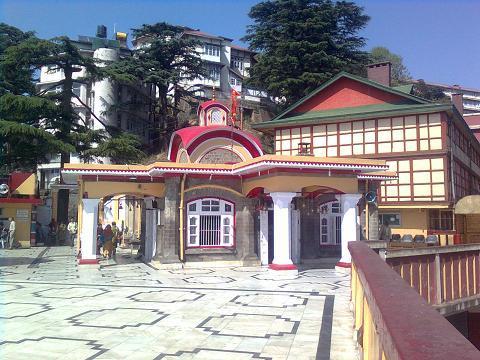 Place Location: Near The Mall

At a distance of 1.5 km from Shimla Railway Station and 1 km from Shimla Old Bus Stand, Kali Bari Temple is one of the popular pilgrim centers and famous tourist places to visit in Shimla.

The Temple of Kali Bari was constructed in 1845 by Ram Charan Bhramachari, a Bengali Brahmin on Jakhu Hill. This is one of the oldest temples in Shimla and is held in high veneration by the town's Hindu community. Later the British rulers relocated the temple to the present site. The temple is dedicated to Goddess Kali who is locally known as 'Shyamala'. The name Shimla is said to have originated from the name 'Shyamala'. The original temple belonged to goddess Shyamla-which was converted into Kali Bari by some Bengali devotees.

A blue wooden idol of Goddess Shyamala at an original altar was installed by some Bengali devotees. Along with the rituals the Kali Bari provides accommodation to its tourists who visit the shrine along with the shrine at Kalka. The Goddess is worshipped in its various forms within the temple premises. The chief incarnations here are of Bhadrakali, Chinnamasta, Rudrarani, Tara, Chamunda, Durga, Himavati, Kumari Sati, Kamakshya, Meenakshi and Uma.

The travellers visiting Shimla never miss to offer their prayers at the Kali Bari temple as they believe it will bring happiness and prosperity to their lives. The temple is thronged by thousands of devotees during the Navratras and Pooja holidays. The temple is located close to The Mall.