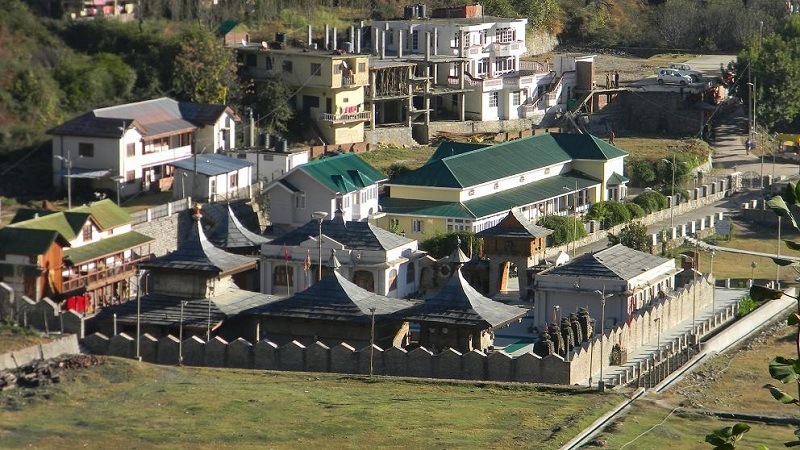 At a distance of 97 km from Shimla & 84 km from Kufri, Hatkoti Temples are located in Hatkoti village of Jubbal. The Hatkoti temples are a group of temples located on the scenic banks of River Jabbar. Hatkoti is one of the popular pilgrimage places in Himachal Pradesh.

The Hatkoti Temple is an abode of goddess Mahishasurmardini, an incarnation of Goddess Durga. The statue of the goddess is 1.2 m in height and made of eight precious metals. The idol depicts the goddess with ten arms, riding a lion, carrying weapons and slaying the demon Mahishasura. There is an inscription on both sides of the idol that no one has been able to decode so far.

The complex also has a separate temple dedicated to Lord Shiva. The temples also boast of five idols, which ideally represent the five Pandava brothers of the Mahabharata period. These idols are arranged in accordance to their size with the first one being the largest.

According to the history, Hatkoti temples date back to the period between the sixth to the ninth century, the Gupta period in Indian history. The temples reflect the beautiful architecture of that era. The architecture and design of Hatkoti Temple was originally in the classical Shikhara or tower style. The Shikhara style represents ancient structures that are conical or narrow at the top and have a wide base at the bottom. The walls of the temples are carved with ornate sculptures and speak volumes of the architectural designs of the eras in which they were created.

Two charming mountain streams Bishkulti and Raanvati joins the Jabbar River in Hatkoti. This confluence is also a great place of pilgrimage.

A fair is held at the temple every year in the month of April. During the fair, the devotees offer rice and homegrown walnuts to the Goddess Durga. It is believed that these offerings please the Devi. Hatkoti Temples are best visited between the months of April-October.