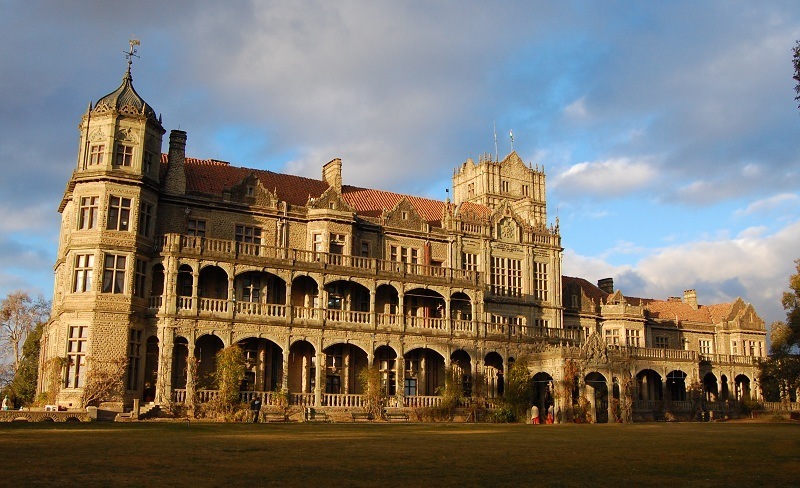 At a distance of 2 km from Shimla Railway Station and 3 km from Shimla Old Bus Stand, Vice Regal Lodge also known as Rashtrapati Niwas is located on the Observatory Hills of Shimla, Himachal Pradesh, India. The lodge is one the best places to visit in Shimla city. It was formerly the residence of the British Viceroy of India Lord Dufferin.

The Vice Regal Lodge was designed by British architect Henry Irwin and built in the Jacobethan style during the regime of Lord Dufferin. Its construction was started in 1880 and completed in 1888. Only the local woods like pine and cedar were used to construct this marvel. Vice Regal Lodge is the only building of Shimla that occupies an entire hill by itself. The building now serves as the center for the Indian Institute of Advanced Study (IIAS).

The entrance opening to South leads one to the reception hall which stands adorned by a splendid fireplace and a grand spiraling staircase. The building has six stories and it is said that all the bricks used for construction of the building were brought here on mules. A library has been developed inside the lodge. It houses some of the most ancient articles and photographs going back to the times of the British rule in India. The majestic Vice Regal Lodge is encircled with extensive pine trees and sprawling gardens on all sides.

This was the venue of the Shimla Conference in 1945. In 1947, the decision to partition India and carve out the states of Pakistan and East Pakistan (now Bangladesh) was also taken here. After independence, the Lodge remained the summer retreat of the President of India. In the early 60s the President of India, Dr. S. Radhakrishnan and the Prime Minister Jawaharlal Nehru decided to make it a scholars' den where the best minds would find an ideal retreat. That's when the Indian Institute of Advanced Study moved into the Lodge in 1965.

Tourists are welcome to visit daily yet only the grounds and entrance hall are open to the public.

Timings: 10 am to 5 pm on all days except Monday.
Entry fee: Rs 20/person for Indians and Rs 50/person for foreign tourists.