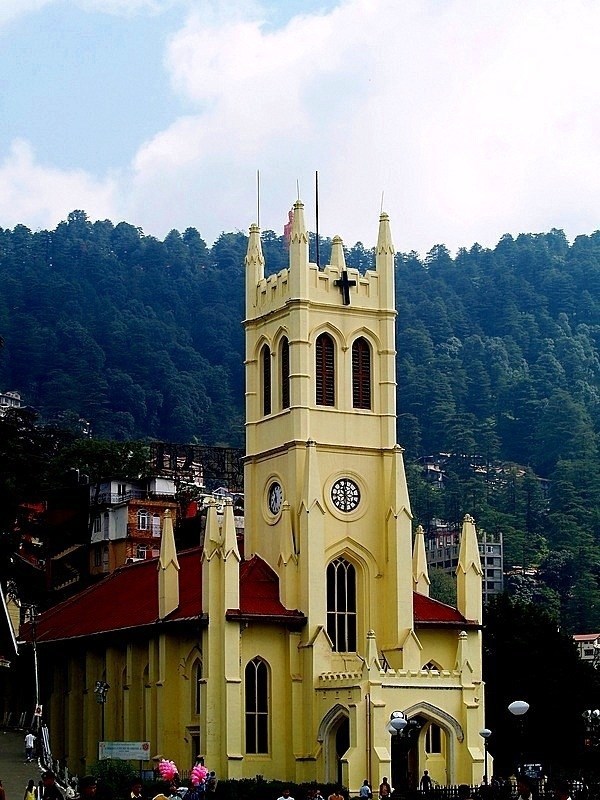 At a distance of 2 km from Shimla Railway Station and 1.3 km from Shimla Old Bus Stand, Christ Church Shimla is the second oldest church in North India. The majestic appearance of the church and its stunning location makes it one of the top places to visit in Shimla.

The church was designed in neo-gothic style in 1844 by J.T. Boileau but it was consecrated after 1857. The Christ Church is situated on The Ridge where is stands out as one of the prominent landmarks of Shimla. Colonel Dumbleton in 1860 donated the giant round clock that adorns the front facial of the church. The porch was added to the structure in 1873. It started as a shrine to serve the Anglican British community in Shimla and hence is considered as one of the most visited places of worship in the country's most celebrated hill town. It is governed under the diocese of Amritsar belonging to the Churches of North India.

The interior of the church is plain except for the five stained glass windows adorning the church on the east. Each window represents different Christian virtues of faith, hope, charity, fortitude, patience and humility. The sanctum of the church is peaceful even with all the hullaballoo outside at the Ridge.

The height of the Church tower is 90 ft and it has prominent round clock on it, a metal Cross, a brass bell and a series of six small bells. The tower was erected in the year 1900. The silhouette of Christ Church is visible for miles around the vicinity of Shimla city. Christ Church remains one of the enduring legacies of the British Raj. Other attraction of Christ Church is its pipe-organs.

The church looks absolutely magical during night when lights placed at strategic corners illuminate this beautiful church. Right next to the Church is a library that was built in the year 1910 by James Ransome. It is designed in the typical Elizabethan style and consists of a great collection of books and ancient scriptures.