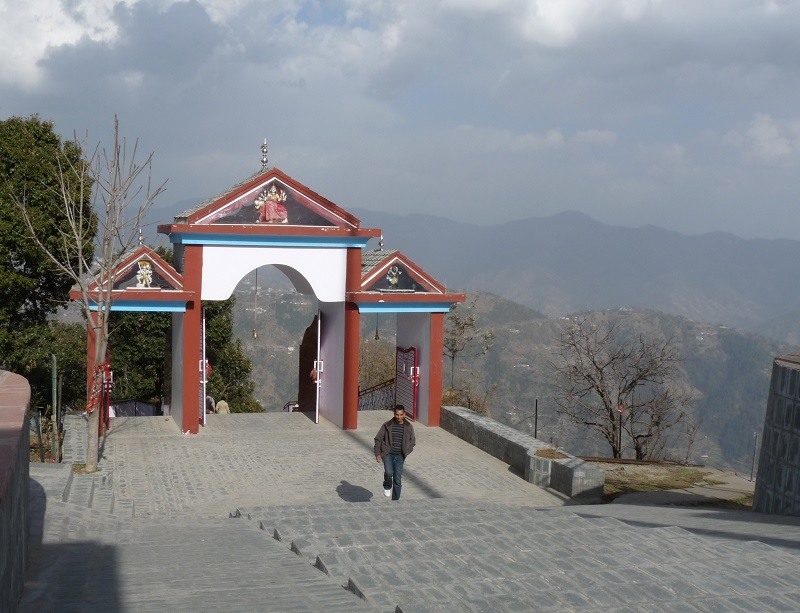 Travel Tips: If you would like to experience Toy Train while visiting Tara Devi Temple, you an catch the train from Shimla to Shogi (13 km), take auto/bus to Tara Devi Temple (4 km) and return back to Shimla by bus/cab.

At a distance of 17 km from Shimla Railway Station, Tara Devi Temple is situated near Shogi village on Shimla - Kalka National Highway. The temple is famous for it's breathtaking location and beautiful valleys around the hill. The temple is one of the top pilgrimage sites and also a popular place for sightseeing in Shimla

The Temple is dedicated to Goddess Tara (goddess of stars) and stands on Tara Devi hilltop lies at an altitude of 1851 m above sea level between Shimla and Shoghi and is a very popular visiting spot for tourists and devotees. The lush green environs surrounding it give the temple a very peaceful and tranquil atmosphere.

According to the legend, Goddess Tara Devi idol was brought to Himachal Pradesh from West Bengal. The history of this temple dates back to about 250 years when this temple was built here. Hundreds of years ago a king from the Sen Dynasty visited this area. He was in the habit of carrying his personal family idol around the upper torso of his arm. While hunting in the dark and dense forests of Juggar, he forgot his path. Because of tiredness he fell asleep and dreamt that his family deity Ma Tara and her consorts Dwarpal Bhairav and Lord Hanuman requested him to unveil them before the people. The king donated 50 bighas of land and sponsored the construction of the Tara Devi temple. Inside the Temple a wooden idol of the Goddess was installed in accordance with Vaishnav traditions.

Later on Raja Balbir Sen of the same dynasty had a dream in which the Goddess expressed her desire to be installed on the hill top of Tarav Parvat. King Balbir Sen commissioned the 'Ashtdhatu' (mix of eight metals) deity enshrined here in 1825. The Sen dynasty of the erstwhile Keonthal State till date is carrying on with the age old tradition of worshipping their family deity Maa Tara on Ashtami during Shardiya Navratras each year when a fair is also held in the same day in the temple complex. The wrestling is an age old tradition of this fair every year.

The location of the temple on the Hill top makes it appear that the goddess seems to keep everyone under the protective gaze, showering innumerable blessings on her worshippers From here one can get a panoramic view of Shimla and snow-clad Himalayan range on one side with the other side revealing the plains at a far distance.

There are big precessions and celebration held at the temple during the Navaratras and Ashtami.