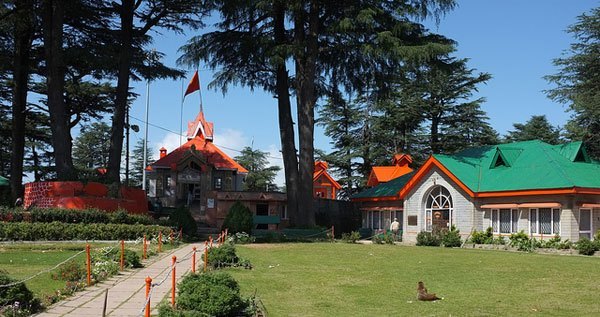 Travel Tips: This place demands about 2.5 km walk through well laid steps from the entry point.

According to mythology, a deadly arrow injured Lord Rama's brother Lakshmana when he was fighting the battle with the demon king Ravana. In order to save his life, when lord Hanuman was moving towards Himalayas to get Sanjeevani herb. Upon reaching the Himalayas, Hanuman couldn't make out as to which herb was the Sanjeevani. So he dug up the entire mountain and flew back to where Lakshmana was lying injured.

After Lakshmana was cured, Hanuman went back to place the mountain in its original site. He rested on top of the Jakhu hill for some time. It is said that the top of the hill got flattened due to Hanuman's weight! The temple has been built around the place that is supposed to have the footprints of Hanuman. It is a highly revered religious place of Shimla and devotees throng in huge numbers to pray.

In 2010, a huge statue of Hanuman is built near Jakhu Temple in Shimla. This is considered as world's tallest statue with 108 ft height lies at the highest altitude of 8100 ft. The temple holds several statues and paintings of Lord Hanuman as well as Lord Rama. The temple also has a pair of feet engraved in white marble which devotees believe are of Lord Hanuman.

There are many monkeys around the temple but surprisingly they don't attack people. Pilgrims offer them eatables which they readily accept. The route to the temple follows a 2.5 km footpath with long sections of steps. Ponies are available for ride to the temple. A nice park is built near to the main Temple of Jakhu now.

There is a ropeway that connects the Jakhu temple to the ridge ground and is the first ropeway in Shimla. The project has been made on a public-private partnership model and is managed by Jagsons International Limited. The ropeway covers a distance of 8 km from the Ridge that comes along the way to Jakhu Temple and reaches the temple in around 5 minutes. The access to the Ropeway is through almost a 1 km upwards trek from The Ridge at Shimla.