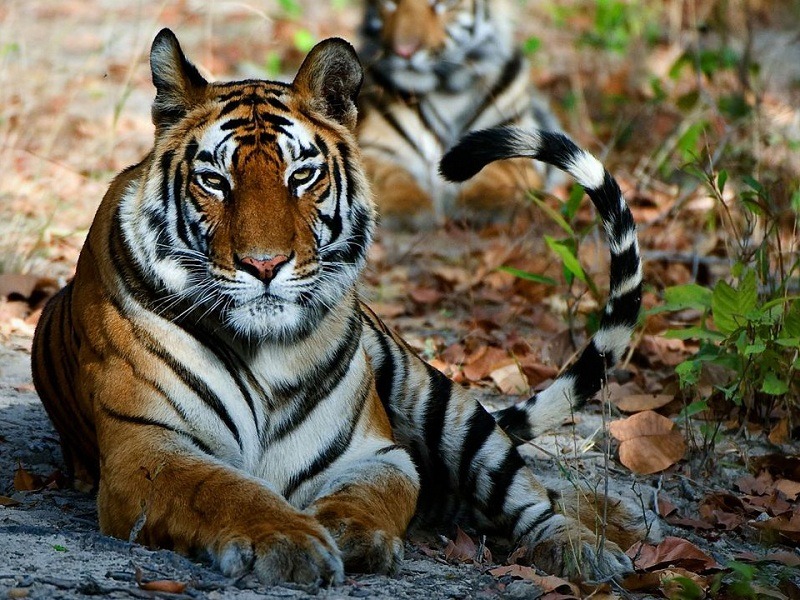 At a distance of 21 km from Panna, 26 km from Khajuraho, 51 km from Chhatarpur, 90 km from Satna, 146 km from Tikamgarh, 180 km from Jhansi, 235 km from Jabalpur, 245 km from Allahabad, 257 km from Kanpur, 287 km from Gwalior, 381 km from Bhopal, 513 km from Nagpur, 567 km from Raipur, and 655 km from Patna, Panna National Park is a national park located in Panna and Chhatarpur districts of Madhya Pradesh in India. Situated near Madla village, it is one of the top national parks in India and among the best places to visit as part of Madhya Pradesh tour packages.

Spread over an area of 542.67 sq. km, Panna National Park was once the private hunting reserve of erstwhile rulers of Panna, Chhatarpur & Bijawar states. It was established as a national park by the Government of India in 1981. In 1994, Panna was upgraded into a Tiger Reserve with the inclusion of some other wildlife sanctuaries like Gangau Wildlife Sanctuary, Panna National Park & Ken Gharial Wildlife Sanctuary. This is the 22nd Tiger Reserve of India and the 5th in Madhya Pradesh.

Panna National Park was given the Award of Excellence in 2007 as the best maintained national park of India by the Ministry of Tourism of India. Unfortunately, the park lost almost all its tigers in 2009 due to poaching. With the collaboration of WWF and PATA, the park authorities introduced two tigers to Panna, one from Bandhavgarh and the other from Kanha Tiger Reserve with intricate scientific inputs. Now, just a decade later, Panna has over 40 tigers.

The terrain of the reserve is characterized by extensive plateaus and gorges while the vegetation comprises of mainly tall grass and scrubby bushes. The Ken River, a tributary of Yamuna, flows through the Reserve from south to north. It is one of the sixteen perennial rivers of Madhya Pradesh and is truly the lifeline of the Reserve.

Panna National Park represents one of the important Tiger habitats of Central Indian Highlands along with its associated species. Apart from tigers, the park is home to various endangered species including Indian wolf, four-horned antelope, sloth bear, pangolin, gharial, rusty-spotted cat, leopard, and carcal. The reserve is also home to nearly 200 species of birds. Besides, the Park is dotted with ancient rock paintings, which are believed to be around two thousand years old along with stunning waterfalls like Raneh Falls and Pandav Falls.

There are two major entry zones for Panna Tiger Reserve namely Madla and Hinauta which remain open for the tourists from mid-October to mid- June, every year. Jeep Safari is the best option to get inside the dense ambiance of the reserve and encounter the wildest ranges of Panna inhabitants. Most safaris into the park start from the Madla village. Maximum 70 vehicles are allowed to travel into the park -50 from Madla and 20 from Hinauta. The safari is organized only in the forest department approved vehicles. Private vehicles are not allowed inside the forest. One can also go for the Night safari offered by the Ken River Lodge in the buffer zone.

Panna Tiger Reserve has very good tourist accommodation at Jungle cottage Hinauta and Raneh Fall and Madla Forest Rest House. The park has 20 rooms, 6 tents and 15 beds dormitory for tourists at these places. Besides, one can also stay near Khajuraho or Panna and join the safari the next day morning. However, since the area around Panna is remote and there is no proper and regular transport service, it might be possible that you do not get any vehicle in the morning to Panna as the safari begins as early as 6. 30 AM in the morning and one need to be there before 30 minutes as the formalities to enter the park takes around 20 minutes.

Khajuraho Airport is the nearest airport to Panna National Park which is about 22 km from Madla. It is well connected by flight with major Indian cities like Bhopal, Agra, Delhi, and Varanasi. However, Gwalior is the major nearest airport which is about 298 km from Panna. About 20 km from Panna Tiger Reserve, Khajuraho Railway Station is the nearest railhead which has well-connected trains from Delhi, Jhansi, Kanpur, Jaipur, Ajmer, Udaipur, Mahoba, Agra, Mathura, Gwalior, Varanasi, and Allahabad. Satna Junction is the nearest railhead which is 90 km from Madla. Khajuraho is the nearest Bus stand to Madla which has regular buses from Jhansi, Bhopal, Chhatarpur, and Satna. One can reach Madla entrance gate of Panna National Park by bus or cab from Khajuraho.

November to March is the best time to visit Panna National Park when the weather is comparatively cooler and more pleasant. The park remains closed from mid- June to mid- October for tourists.

How to Reach Panna National Park

#1 of 6 Places to Visit in Panna National Park

At a distance of 1 km from Madla Bus Stand and 26 km from Khajuraho, Madla Gate is a very popular entrance gate for Panna National Park. The entry gate from Madla zone is near the MPTDC jungle camp after crossing the Ken River Bridge.

Madla Zone is famous among the wildlife enthusiasts as the chances of tiger spotting are high in this zone. Besides, many herbivorous and large mammals can be spotted in this region than Hinauta zone. Jeep Safari and Canter safari are available here for visitors.

The jeep safari is an activity that one must indulge in on their visit to Panna Tiger Reserve as it is the most popular way to explore the park. Tourists are required to book entrance ticket either online at MP Forest Department website or by visiting the entrance gate booking counter. One needs to pay for safari vehicle and guide fee at the entrance gate. The safari is organized only in the forest department approved vehicles. Private vehicles are not allowed inside the forest. They .....

#2 of 6 Places to Visit in Panna National Park

At a distance of 30 km from Madla, Hinauta Gate is another entry point to the Panna National Park. The entry gate from Hinauta zone is near the NMDC jungle camp after crossing the village of Hinauta.

The terrain in this region is predominantly rocky and dry. It is the best spot to find some wild cats including tiger, leopard, and others. One can also spot Sloth bears in this zone. Besides, one can explore the beautiful gorges and ravines, compelling waterfalls and the thick green forest during the jungle safari.

Jeep Safari and Canter safari are available here for visitors. Tourists are required to book entrance ticket either online at MP Forest Department website or by visiting the entrance gate booking counter. One needs to pay for safari vehicle and guide fee at the entrance gate. The safari is organized only in the forest department approved vehicles. Private vehicles are not allowed inside the forest. They can be hired at the entrance gate or through your travel agent. .....

#3 of 6 Places to Visit in Panna National Park

At a distance of 1 km from Madla Bus Stand, Boat Riding in Ken River is one of the top things to do in Panna. It is operated by the Panna Tiger Reserve authorities.

Ken River flows from the ravines and gorges of the park and covers most of the forest area. It is a tributary of the Yamuna River. It is the lifeline of Bundelkhand region of Madhya Pradesh. It is home to long snout gharial, python and other aquatic species.

An hour-long boat ride across the Ken River is the best thing to catch the glimpses of Gharials and other animals that come to the river banks to quench their thirst. The activity is a delight if you love birding as a wide range of bird species can be spotted near the river. The whole experience of boating in the tranquil waters of the river is mesmerizing.

#4 of 6 Places to Visit in Panna National Park

At a distance of 21 km from Khajuraho and 43 km from Panna, the Raneh Falls is a natural waterfall located in Chhatarpur district of Madhya Pradesh. It is one of the popular waterfalls in Madhya Pradesh and also one of the best Khajuraho tourist places.

Raneh Falls is an exquisite waterfall formed by River Ken running over one of the oldest rocks on earth, the Vindhya basalt. The falls is named after King Rane Pratap, the erstwhile ruler of the region. Situated in the close vicinity of Khajuraho, the waterfall emerged at the confluence of Ken and Khudar Rivers. Raneh Falls mark the edge of the Rewa plateau in Madhya Pradesh. The cascading waterfall is surrounded by wonderful rock formations.

The Ken River forms a 5 km long, and 30 m deep canyon made of pure crystalline granite in varying shades of colours ranging from pink and red to grey. It is popularly called 'The Grand Canyon of India' by the tourists, who have paid a visit to this cascade. There is a series of waterfalls .....

#5 of 6 Places to Visit in Panna National Park

Pandav Falls is a perennial fall fed by a tributary of the river Ken in Madhya Pradesh. The falls cascades down from a height of about 30 meters into a heart shaped pool. Surrounded by lush green forests, the falls is spectacular and accessed even during peak monsoon season. The serenity, purity and mystic atmosphere of the Pandav Falls attract both the locals and tourists. At the foot of falls there are some ancient caves overlooking a large pool of water. The Pandavas of the Mahabharata are believed to have spent a part of their exile here.

The place is ideal for an enjoyable family picnic at the sparkling pool. Smoking and swimming is not allowed at the .....

#6 of 6 Places to Visit in Panna National Park