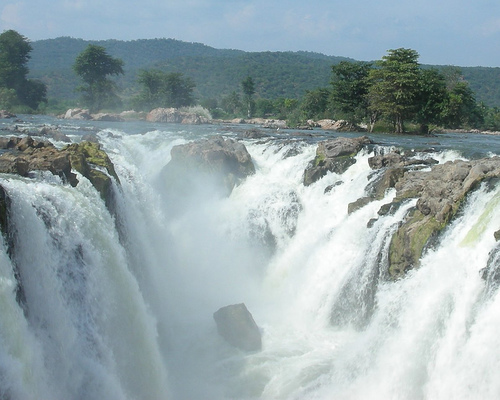 At a distance of 47 km from Dharmapuri, 85 km from Salem, 114 km from Yercaud, 146 km from Bangalore, 180 km from Mysore, 217 km from Coimbatore, and 345 km from Chennai, Hogenakkal Falls is a stunning waterfall located in the Dharmapuri district of Tamil Nadu. Formed over Kaveri River, it is one of the top places to visit in Tamilnadu, and among the best waterfalls in India.

Often referred to as the 'Niagara of India', Hogenakkal is also one of the wonderful tourist places to visit near Bangalore & Chennai. When the River Kaveri enters the Tamil Nadu border after winding its way through the state of Karnataka, it descends down the lofty landscape forming the Hogenakkal Waterfalls. The Carbonatite rocks found near the waterfall are one of the oldest in the world. The two Kannada words 'Hoge' means 'Smoke' and 'Kal' means 'Rocks' give meaning to the word Hogenakkal as Smoky Rocks. It is also called as Marikottayam by the people of Tamil Nadu.

The falls has about 14 channels with drops varying between 15 & 65 ft. To reach the surroundings of waterfalls one needs to take a boat-ride (there is no land access). Coracle riding is one of the main attractions here which is allowed during the monsoon and winter season. Boating is usually stopped in peak monsoons. Hogenakkal is also the good place to try out your swimming skills. The water is quite challenging. Tourists can also go for trekking on the nearby surrounding hills as part of Hogenakkal tour packages. The water from the fall flows towards the Mettur Dam which is also known as the Stanley Reservoir.

The Nearest airport is Bangalore International Airport about 216 km from Hogenakal Falls. Dharmapuri is the nearest railway station, which is about 47 km from Hogenakal. It is connected by rail with Bangalore, Mumbai, Trivandrum, Tuticorin, Coimbatore, Salem, Nagarcoil, Mysore, Pondicherry, Tirunelveli and Ernakulum. Dharmapuri is the nearest major bus station to Hogenakkal. It has buses from Bangalore, Mysore, Salem, Coimbatore, Chennai, Trivandrum, Kochi, Ooty, Madurai and Hyderabad.

How to Reach Hogenakkal

How to Reach Hogenakkal - Full Details

Top 10 Places to Visit in Hogenakkal

#1 of 3 Places to Visit in Hogenakkal

At a distance of 31 km from Salem, 114 km from Hogenakkal, 193 km from Coimbatore, 249 km from Bangalore, and 349 km from Chennai, Yercaud is a beautiful hill station in the Salem district of Tamil Nadu. It is one of the popular places to visit as part of Tamilnadu tour packages, and among the most famous tourist places near Trichy.

At an altitude of 1515 m in the Shevaroy hills, Yercaud is one of the top hill stations near Bangalore. The town got its name from the Yercaud Lake located at its center. In Tamil, Yeri means lake and Kaadu means forest. Stone-age implements have been found from the ancient shrine located near Shevaroy Hills, which is about 5 km from Yercaud Lake, among the must include places in Yercaud tour packages. Sir Thomas Munroe, erstwhile governor .....

#2 of 3 Places to Visit in Hogenakkal

At a distance of 94 km from Vellore, 145 km from Yercaud, 178 km from Bangalore, and 230 km from Chennai, Yelagiri is a hill region in the Vellore district of Tamil Nadu. Located in between the towns of Vaniyambadi and Jolarpettai, this is one of the best hill stations near Bangalore, and among the famous places to visit in Tamilnadu.

Yelagiri is a cluster of 14 hamlets that lie between four mountains spread over an area of 30 sq km having an altitude of 3500 ft. This is one of the least explored places near Chennai. The main town of Yelagiri Hills is Athanavur, which comprises a winding road through the hills with isolated villages. The Whole of Yelagiri was once the private property of the Yelagiri Zamindar Family. It was taken over by the government of India during the Early 1950s. The house of the Yelagiri Zamindars still .....

#3 of 3 Places to Visit in Hogenakkal

At a distance of 135 km from Mysore, 89 km from Hogenakkal, 72 km from Kollegal & 209 km from Bangalore, Male Mahadeshwara Betta, also known as MM Hills is a sacred place situated in the eastern parts of Kollegal taluk in Chamarajanagar district of Karnataka. It is situated at an altitude of 3000 feet. This is one of the top attractions you must include in Mysore packages.