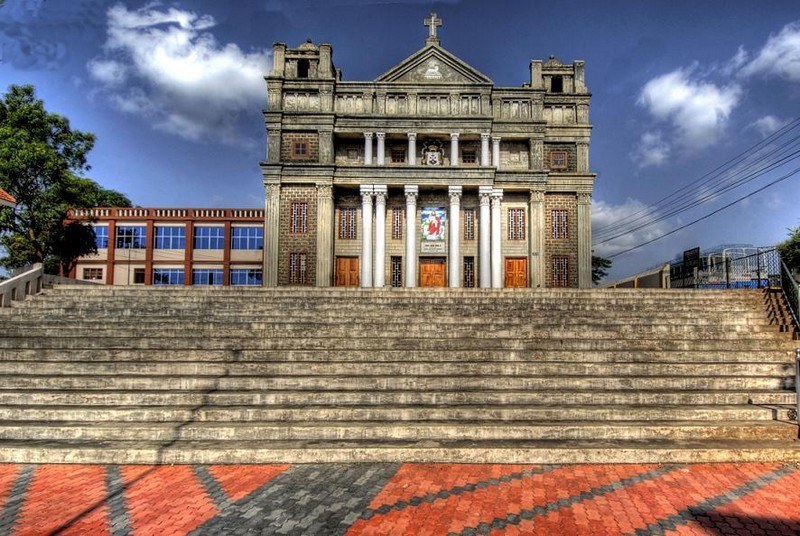 At a distance of 48 km from Alleppey, 63 km from Kochi, 142 km from Munnar, 155 km from Trivandrum, and 240 km from Coimbatore, Kottayam is a city located in central Kerala and is also the administrative capital of Kottayam district. It is one of the well known places to visit as part of Kerala Tour Packages. The city is an important trading center of spices and commercial crops, especially rubber.

Kottayam is bounded by the Western Ghats on the east and the Vembanad Lake on the west. Kottayam is well known as a beautiful Kerala backwaters destination with stunning landscape and beauty. Kumarakom, the most famous backwater destination of Kerala is situated very close to Kottayam. It is also a gateway to the pilgrim centers of Sabarimala, Mannanam, Vaikom, Ettumanoor, Bharananganam, Erumeli, Manarcaud.

Kottayam is the first town to have attained 100 percent literacy in India. It had the first college in Kerala & the first Malayalam Printing Press. Major Kerala print media such as Malayala Manorama group and Deepika are headquartered in the city. It is one of the best places to visit near Trivandrum, and Kochi. Kottayam was ruled by the Kulasekhara Empire (1090 - 1102 AD). It was later split into the Thekkumkoor kingdom and the Vadakkumkoor kingdom. The Portuguese and the Dutch had trade contacts with both Thekkumkoor and Vadakkumkoor Kingdoms. Both these kingdoms were occupied by Marthanda Varma of Travancore in mid 18th century and remained under the Princely State of Travancore.

Being a mountainous region with scenic landscapes, backwaters, bird sanctuaries, temples, and churches makes this place an attractive tourist destination. The Poonjar Palace is an example of the rich culture of Kerala. The Thirunakkara Mahadeva Temple, Pallippurathu Kavu, Thiruverpu Temple, and the Saraswathy Temple are some famous temples that one must visit as part of Kottayam tour packages.

Kottayam is the main Christian center in Kerala, renowned for its churches and houses built in colonial style. St Mary's Knanaya Church, Valiyapalli, St Mary Church (Cheriyapally), St Mary's Forane Church, Good Shepherd Church, and Vimalagiri Church are some other prominent religious places to visit in Kottayam. The ancient Thazhathangady Juma Masjid and the old St. Mary's Orthodox Church Kottathavalam attract many devotees every day. Kottayam hosts an annual Flower Show and Food Festival in the third week of January. Kottayam can be visited along with Alleppey tour packages.

The best time to visit Kottayam is from Oct-Mar, while the peak seasons are Sep & Nov to Feb. It usually takes 2-3 full days to explore this area.

How to Reach Kottayam - Full Details

Top 10 Places to Visit in Kottayam

At a distance of 1 km from Kottayam Railway Station, Thirunakkara Mahadeva Temple is a Hindu temple situated in Kottayam, Kerala. Located in heart of the Kottayam town, it is one of the oldest temples in Kerala, and among the must-visit places during your Kottayam tour.

Dedicated to Lord Shiva, Thirunakkara Mahadeva Temple was constructed by Thekkumkoor Maharaja in the early 16th century. The Mahadeva Temple showcases typical South Indian architecture. The walls of the temples are decorated with beautiful paintings of different scenes from the Hindu epics. The innermost sanctum of the temple is adorned with impressive images of epic characters from Hindu mythology.

The whole temple complex occupies about 4 acres (1.6 ha) of land which is rich in many trees and plants. One of the largest Koothambalams in Kerala is in this temple situated in the southeast corner. The two-storeyed .....

At a distance of 5 Kms from Kottayam Railway Station, Bhagavathy Temple at Kumaranalloor is one of the most important Devi temples in Kerala.

The idol of the Goddess is in standing position and is about 3 feet high. The temple has been identified by Sri Adi Sankaracharya as one of the five important centers in India to worship Durga. The temple was built in sreechakra style and known for its unique architecture. It is also renowned for its temple towers constructed in Tamil Nadu style of architecture. The temple has many attractive mural paintings and wood carvings.

The annual festival of the temple is celebrated in the month of November / December.

At a distance of 11 Kms from Kottayam Railway Station, Mahadeva Temple located in Ettumanoor is one of the most celebrated Siva temples in Kerala. This is one of the popular tourist & pilgrimage sites to visit near Kottayam & Kochi.

This temple is known for its exceptional murals and woodcarvings made in 16th century. The themes of these murals are stills from the Hindu epics, Ramayana and Mahabharata and the and Puranas.The oil lamp at the entrance of the temple is believed to have been lighted for more than 450 years and it is fed with oil by the devotees everyday. There are 14 decorative gopuras in the temple built in 16th century.

Another attraction of the temple is Ezhara Punnana (golden elephants) donated to the temple by Maharaja of Travancore. The golden elephants are kept on display during the temple annual festival celebrated in the month of February / March. Only Hindus are allowed into this temple.

At a distance of 3 km from Kottayam Railway Station, Cheriapally Church is a Malankara Orthodox Syrian Church located in Kottayam, Kerala, India. Situated on the way to Kumarakom from Kottayam, it is one of the oldest churches in Kerala, and among the must-include places in Kottayam packages.

St. Mary's Orthodox Syrian Church, commonly known as Kottayam Cheriapally, is dedicated to mother Mary. According to the legend, the Thekkumkore (old Kottayam) kings were glad that Christians were living in their kingdom. King Kothavarma, who was ruling the kingdom during that period, provided them land for constructing the church, without levying the tax. A church was first built in 1550 and named Valiyapally. However, the congregation later split into ethnic lines and the dissidents built Cheriapally in 1579. The Cheriyapally Church was built by Portuguese architect Antony but the Portuguese did not influence the mode of worship in the church. .....

At a distance of 29 Kms from Kottayam, 35 Kms from Alappuzha & 33 kms from Pathanamthitta, Sri Vallabha Temple is located near Thiruvalla town (4 Kms) in Pathanamthitta district.

This ancient temple dedicated to Lord Vishnu is one among the 108 Diva Kshetrams in India. This temple is built in typical Kerala style of temple architecture with fine carvings and murals. The inner sanctum of the temple houses a 6 feet tall idol of Maha Vishnu. The flag staff of the temple is made out of granite and it is about 50 feet tall. A 3 feet idol of Garuda (the eagle vehicle of Lord Vishnu) is installed on top of the flagstaff.

This temple is famous for the traditional Kathakali performances almost every night and it is perhaps the only temple in Kerala where Kathakali is regularly performed as a ritual offering to a deity, after the evening Pooja

At a distance of 16 km from Kottayam, 36 km from Alleppey, 56 km from Kochi, 135 km from Munnar & 164 km from Trivandrum, Kumarakom is a cluster of little islands on the Vembanad Lake in Kerala. Also known as the Queen of Vembanad, Kumarakom is the most famous Kerala backwaters destination for traditional houseboat rides and among the most visited Kerala tourist places.

The name Kumarakom was derived from the deity of an old temple Kumaran. Kumarakom is also one of the ideal weekend getaways from Kochi. Kumarakom is an unbelievably beautiful paradise of mangrove forests, emerald green paddy fields, and coconut groves. In order to protect the ecology of the place, the Kerala government has declared Kumarakom as a special tourism zone. Arundhati Roy, the author of the 1997 Booker Prize-winning 'The God of Small Things', was raised in the nearby .....

At a distance of 10 Kms from Kottayam Railway Station, St. Mary's Cathedral, also known as Marthamariam is located in Manarcad, about 3.5 Kms from NH220 towards Thekkady/Periyar. This 10th century Cathedral is one of the most important churches of the Jacobite Syrian Christians.

The main annual festival is 'Feast of Virgin Mary's Birth' celebrated for 8 days between September 1st & 8th of every year. It is also called as Ettunompu, where devotees take fasting for 8 days. During this festival, hundreds of thousands of devotees from all over the world reach Manarcad to seek the blessings of Virgin Mary.

At a distance of 10 Kms from Kottayam Railway Station, St George Orthodox Church is located in Puthupally. This is one of the prominent churches of Malankara Orthodox Church.

The church was consecrated about 400 years ago by the Malankara Metropolitan Mar Dianasiyous. This Church is famous for the powerful intercession of St.George. It is believed that saint protects those who take refuge, from serpents, ailments, and all kinds of dangers and troubles. The Church is famous for its rich traditions as well as wealth. The main sanctum has beautiful wall paintings and ornamental decorations. The unique Golden Cross weighing around 450 sovereigns is taken out during the annual festival.

The annual festival is celebrated on 7th or 8th of May. Hundreds of thousand of devotees of various religions participate in the celebrations.

At a distance of 18 km from Kumarakom, and 35 km from Kottayam, Vaikom is famous as a temple town in the Kottayam district of Kerala. Situated on the eastern side of Vembanad Lake, popular getaway to experience beautiful backwaters in Kerala, and among the must-visit Kumarakom tourist places.

Vaikom is well known for the ancient Mahadeva temple dedicated to Lord Shiva and is believed to be built by Parasurama, the founder of Kerala. The temple has a huge courtyard spanning over 8 acres of land and four towers on each side of the temple. Other major attractions of the Mahadeva Temple include the Garbagriha, a golden Stupa surmounting Garbagriha, 19.5m tall golden staff, etc. The exterior walls of the Garbagriha exhibit several pieces of artwork.

This is the place that had made a significance in Indian history with the Vaikom Sathyagraham in 1924, i.e the movement against untouchability in Hindu society. .....

At a distance of 36 km from Idukki, and 48 km from Kottayam, Ilaveezha Poonchira is a beautiful valley situated at Melukavu village in the Kottayam district of Kerala. It is one of the best places to visit near Idukki uring your Idukki tour.

The stunning valley of Ilaveezha Poonchira is spread across thousands of acres at the foot of three hillocks - Mankunnu, Kudayathur Hill, and Thonippara near Kanjar. During the monsoons, the valley between a complex of mountains fills up to form a large pond. Ilaveezha Poonchira means 'the pond of flowers where the leaves do not fall'. Legends say that the pool here was a bathing place for Draupadi, the legendary heroine of Mahabharata.

Surrounded by hillocks raised above 3000 feet from sea level, Ilaveezha Poonchira is an ideal place for trekking in Kerala. This is also one of the best places in Kerala to witness both the sunrise .....