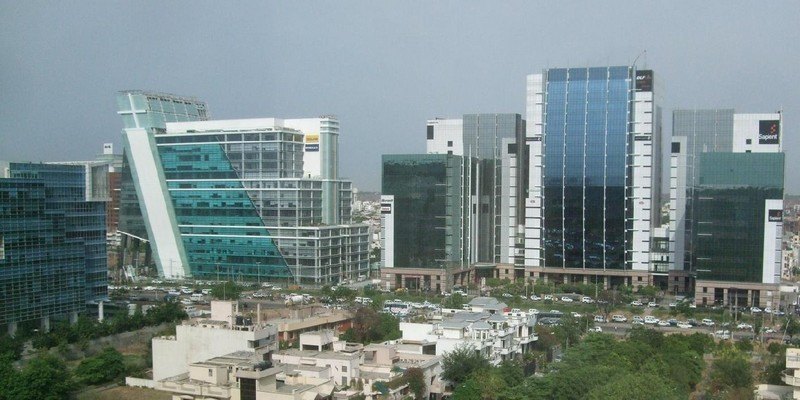 At a distance of 34 km from Delhi, 233 km from Jaipur, 196 km from Agra and 278 km from Chandigarh, Gurgaon is a city and headquarters of Gurgaon district in the state of Haryana. Along with Faridabad, it is the industrial and financial center of the state. It is one of the four important satellite cities of the National Capital Region and is often referred to as the Millennium City.

Gurgaon, also known as Guru Gram (village of the spiritual teacher) was named after Dronacharya, guru of Pandavas and Kauravas in Epic Mahabharata. It is said that Guru Dronacharya gave spiritual instructions to the Pandavas and the Kauravas at this place. The city was ruled by Yaduvanshis, Rajputs, Marathas, Mughals and British. Gurgaon was initially a small farming village, but now a large number of industries like Maruti, Atlas Cycles etc. have sprang up in this area. Many corporates, MNCs and reputed educational institutions and schools have also made it their location for head office. Gurgaon has the third highest per capita income in India after Chandigarh and Mumbai.

Delhi Airport is the nearest airport, which is about 17 km from Gurgaon. Gurgaon Railway station is well connected by train with Delhi, Jaipur, Ahmedabad, Haridwar, Udaipur, Jodhpur, Jammu Tawi, Jaisalmer, Kathgodam, Rajkot, Bikaner, Varanasi, Ajmer, Rewari and Agra. Gurgaon is located on NH 8 and it is well connected by bus with major cities like Delhi, Agra, Jaipur, Mumbai, Noida and Ahmedabad.

Gurgaon experiences extreme weather conditions. It gets really hot in the summers and pretty cold during winters. The best time to visit Gurgaon is from September to December.

Name of Gurgaon is officially changed to Gurugram from Apr 2016.

How to Reach Gurgaon - Full Details

Top 10 Places to Visit in Gurgaon

#1 of 9 Places to Visit in Gurgaon

At a distance of 16 km from Gurgaon and 50 km from Delhi, Sultanpur National Park, formerly Sultanpur Bird Sanctuary is located at Sultanpur in Gurgaon district of Haryana state. It is one of the popular places to visit near Delhi for a day trip.

Sultanpur Bird Sanctuary is very popular national park and ideal for bird watching. Established in 1972 as the Sultanpur Bird Reserve, this place was upgraded to National Park in 1989. Since then, the lake that earlier had to depend on monsoon for its water was provided water from Yamuna River enabling it to remain full throughout the year. Spread over an area of 1.43 sq. km, this bird sanctuary is inhabited by over 250 species of birds. During the winter months, it attracts more than 100 varieties of migratory bird species from Siberia, Afghanistan, Russia, Turkey and East European countries.

#2 of 9 Places to Visit in Gurgaon

At a distance of 3 km from Gurgaon Bus Stand, Sheetala Devi Temple or Sheetala Mata Mandir is one of the major pilgrimage site in Gurgaon. It is also known as Masani Mata Mandir

The temple, standing near a pond, is dedicated to Mata Sheetla Devi. The presiding deity is made of gold polished metal. Placed in a wooden casket on a small marble platform, this image weighs about 4 kg. The deity is believed to be the Goddess who protects children from small pox and gives them a healthy life. Majority of the visitors to the temples are women who come here to seek the blessings of the Goddess for their children.

The temple was built by son of King Surajmal of Bharatpur. The temple also houses other deities like Lord Hanuman, Lord Shiva, Shani Dev & Goddess Durga. The temple authorities have also constructed Mundan Halls where the first hair-cutting ceremony for children is held, Satsang Bhavan for yoga & other spiritual activities and Bhandara Bhavan for offering food to the pilgrims.
.....

#3 of 9 Places to Visit in Gurgaon

At a distance of 22 km from Gurgaon and 59 km from Delhi, Manesar is a fast growing industrial town in Gurgaon district of Haryana and is a part of the National Capital Region (NCR) of Delhi. It is a popular getaway from Delhi city for a quick day trip.

Manesar lies on the outskirts of the city of Gurgaon, which has earned it the name New Gurgaon. Original Manesar village was a sleepy village of about 1000 dwellings on Delhi-Jaipur highway (NH-8), but since late nineties it has been transformed into one of the fastest growing townships in NCR.

Today, Manesar has many reputed factories, offices, hotels and educational institutes. The headquarters of some prestigious national institutions like National Bomb Data Centre and National Brain Research Centre are located at Manesar. The training center as well as the Head Office of the National Security Guards is also based at Manesar.

#4 of 9 Places to Visit in Gurgaon

At a distance of 25 km from Gurgaon, 51 km from New Delhi and 10 km from Sohna, Damdama Lake is a natural lake near Sohna in Gurgaon district of Haryana and is a popular picnic spot among tourists visiting Gurgaon.

Located near the Aravalli Hills, this lake is one of the biggest lakes in Haryana with an area of 3,000 acres. The Lake is spread in the shape of an amoeba and has many branches. Damdama Lake was formed when a stone and earthen dam constructed by the British in 1947. The lake is fed mainly by monsoon rain pouring into the base of the Aravalli hills. During monsoon the water level reaches up to 50 feet - 70 feet.

Tourists visiting this place can indulge in boating, hot air ballooning, parasailing, kayaking and fishing. Adventure sports like rock climbing, trekking and camping are also possible in the destination. Damdama Lake is home to around 190 species of birds. Some of the major birds seen here are water fowl, cranes, cormorants, terns, egrets, kingfishers etc.

#5 of 9 Places to Visit in Gurgaon

At a distance of 25 km from Gurgaon, Sohna is a town in the Gurgaon district of Haryana. Sohna is situated in the foothills of Aravallis. It is famous for its hot water springs and an ancient Shiva Temple. The town derives its name from the gold dust which was found in the sand of streams in peak monsoon season.

Sohna is well known for its hot water springs. The springs are located at the foot of a perpendicular rock, and are capped by a dome believed to have been built in the 14th century. The water is strongly sulphurous and its temperature varies from 46°C to 51.7°C. According to legend, Arjun, one of the five Pandav brothers, dug these wells when he was thirsty. It is also called Shiv Kund, is said to have medicinal properties and curative effects. During the solar or lunar eclipse and Somvati Amavasya, several Hindus take a dip in this holy tank.

The Ancient Shiv Temple here was built by the Raja of Gwalior. Every year on the occasion of Shiv Chaudas and Shiv Ratri the .....

#6 of 9 Places to Visit in Gurgaon

At a distance of 4.5 km from Gurgaon Bus Stand, Kingdom of Dreams is India's first live entertainment, theatre and leisure destination with offerings of Musicals, Dramas, Mythological Shows, Street Dances, Mock Indian Weddings and much more.

This iconic place was started in the year 2010 and is a perfect fusion of Indian culture, art & crafts, heritage and cuisines found under a single roof. Spread over 6 acres and built at a cost of over Rs. 2 billion, Kingdom of Dreams is run by the Great Indian Nautanki Company (GINC), a joint venture between Apra Group and Wizcraft. Bollywood Superstar Shah Rukh Khan is the global ambassador of this place.

Kingdom of Dreams consists of Nautanki Mahal, Showshaa Theatre, and a cultural and cuisine area known as Culture Gully. Nautanki Mahal is the main attraction of this place and is designed like a grand palace. It is an 835-seat auditorium within the complex and it is the venue where Bollywood kind of music, shows and theatre are organized. .....

#7 of 9 Places to Visit in Gurgaon

At a distance of 47 km from Gurgaon, Nuh is a historical town and the district headquarters of Mewat district in Haryana. It is situated on the Delhi-Alwar Highway. The town assumed importance at the time of Bahadur Singh of Ghasera because of the trade in salt manufactured in neighboring villages.

There are several historical ruins around Nuh that date back to the 14th century. Prominent structures include the mosque and the tomb of Bahadur Khan Nahir. The highlight of these structures is the architecture and carvings on the red sandstone and grey quartzite. Chui Mai Pond is a rectangular ancient water tank with a cenotaph of red stone with beautiful carvings.

#8 of 9 Places to Visit in Gurgaon

At a distance of 41 km from Gurgaon and 5 km from Faridabad, Raja Nahar Singh Palace, famous known as Ballabgarh Fort Palace, is located at Ballabgarh village in Faridabad district of Haryana.

Ballabgarh was founded by Balram Singh, in 1739, who also built the Nahar Singh Mahal Palace in the same year. Though the earliest parts of the palace were built by Rao Balram, the predecessor of Raja Nahar Singh, the palace was named after the Raja Nahar Singh, who gave up his life in the War of Independence that happened in 1857. The fort was renovated several times throughout the history.

The Ballabgarh Fort Palace is known for its unique architecture. The palace is similar to the palaces of Deeg and Bharatpur, which is decorated with intricate minars on its four corners of which only two can be seen now. The palace holds a Darbar-e-aam (Hall of Public audience) and a Rang Mahal decorated with beautiful Chhatris. Now the palace has been taken over by the Haryana Tourism and converted .....

#9 of 9 Places to Visit in Gurgaon

At a distance of 24 km from Gurgaon & 55 km from New Delhi, Farrukhnagar is a historical town in Gurgaon district of Haryana. It is one of the nine administrative blocks of Gurgaon district and shares its border with Jhajjar district.

Farukh Nagar was established in 1732 by Faujdar Khan, the first Nawab of Farrukhnagar and a governor under Mughal Emperor. Farrukhnagar flourished due to its salt trade till the late 19th century, and was abandoned in the early 20th century during the British Raj. Sheesh Mahal and Jama Masjid are the noted Mughal era monuments situated in this fort town.

Farukh Nagar Fort, which was built in the 18th century by Nawab Faujdar Khan, is one of the popular tourist attractions in the town. The fort has an impressive bastion Dilli Darwaza, with a typical Mughal architecture. It was one of the entrance gates to the Farukh Nagar town. Today the fort is mostly in ruins, though it underwent restoration in 2009. Out of five entrances, this gateway is one .....

Best Places to Visit in Haryana