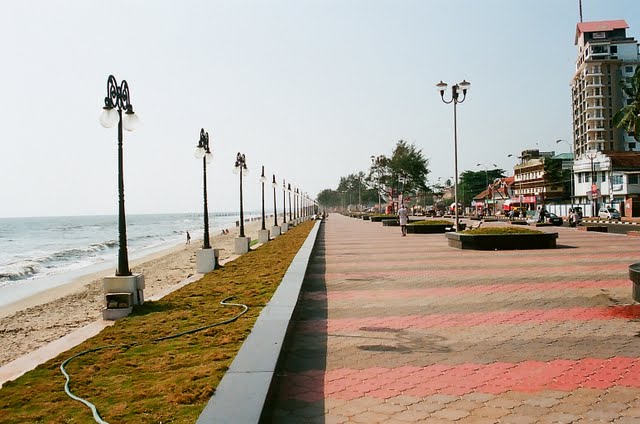 At a distance of 179 km from Kochi, 124 km from Palakkad, 176 km from Coimbatore, 113 km from Thrissur, 158 km from Ooty, 241 km from Mangalore, 352 from Bangalore, 376 km from Trivandrum and 213 km from Mysore, Kozhikode (also known as Calicut) is a city in the state of Kerala. It is the 3rd largest city in Kerala and the headquarters of Kozhikode District.

The name Kozhikode is said to be derived from Koyil (palace) Kotta (fort). This is known by various names, for the Arabs it was Kalikat, for the Chinese it was Kalifo. Tipu Sultan, during the conquest of Malabar, unsuccessfully attempted to change the name of the city to Firozabad. Malayalis have always preferred to call it Kozhikode. With the Arabian Sea on the west and Wayanad Hills on the east, Kozhikode is a popular places to visit in Kerala.

According to history, Kozhikode was under the Chera rulers until 1122 AD. The city of Calicut came into existence in the 13th century when the Ernad King Udaiyavar conquered the area around Ponniankar and built a fort at a place called Velapuram, now known as Calicut. The Europeans called him Zamorin. Interestingly, the name Calicut is derived from 'calico,' the fine variety of hand-woven cotton cloth said to have originated from this place. Vasco Da Gama landed at the Kappad sea shore with three vessels and 170 men in 1498. A monument is constructed here to commemorate the historical landing.

Kozhikode was once the capital of the powerful Zamorins and a prominent trade and commerce center. Kozhikode city continues to be a center of flourishing domestic and international trade. Kozhikode city is the marketing center for commodities like pepper coconut, coffee, rubber, lemon grass oil etc. produced in Kozhikode and the neighboring districts of Wayanad, Malappuram and Kannur.

Best time to visit Kozhikode is from November to May. It usually takes 1-2 full days to explore this area.

How to Reach Kozhikode - Full Details

Top 10 Places to Visit in Kozhikode

#1 of 31 Places to Visit in Kozhikode

At a distance of 1 Km from Kozhikode Railway Station, the Mananchira Square is a historical place, now converted to a recreation center, in the heart of Kozhikode City.

This historic place, adjacent to Manachira has been converted as a park with beautiful plants, artificial hill, shrubs, sculpture, an open-air theatre and a musical fountain. The Palace Tank of former King Mana Vikrama here is a display of fine architecture. The corporation of Kozhikode manages Mananchira Square.

This is the venue of Malabar Mahotsavam held from Jan 13th to 16th every year, which is a cultural festival that showcases centuries old rich cultural heritage of Kerala. Musical concerts, kathakali, mohiniyattom, ottanthullal, koothu, theyyam and Thira are staged during the festival.

#2 of 31 Places to Visit in Kozhikode

At a distance of 1 Kms from Kozhikode Railway Station, Kozhikode Beach is a favorite place to watch sunset. Its natural beauty makes it a dream place to visit.

Kozhikode Beach has two piers, each more than 100 years old. There is a lighthouse that offers stunning views of the seashore and the Arabian Sea. Here the water is muddy and not really a good place for swimming. However, the shore is relatively wide and an ideal place for spending an evening.

The Lions Park is very close to the Kozhikode beach, has good play facilities for children. Marine Aquarium near the beach is also a good place to visit. Many food stalls are available near the beach.

#3 of 31 Places to Visit in Kozhikode

At a distance of 10 Kms from Kozhikode Railway Station, Beypore Beach is located at the mouth of the Chaliyar River. Now an important port and fishing harbor, this place was also an important trade and maritime centre during the days of the early Arab and Chinese travelers and the Europeans.

The Beypore Beach is a commercial center for ship building and has existed here for more than 1000 years. This boatyard is famous for making a distinctive ship vessel known as 'Uru'. One of the major attractions at Beypore is its magnificent 2 km long stone bridge called as Pulimoodu, built entirely of stones, making a pathway into the sea.

#4 of 31 Places to Visit in Kozhikode

At a distance of 20 Kms from Kozhikode Railway Station, Kappad beach is one of the most charming Kerala beaches and also one of the best Kerala tourist places. Vasco da Gama landed on Indian soil on 27th May 1498 at Kappad beach along with 170 men.

There is a monument on the beach that commemorates the landmark event of Vasco da Gama's arrival. This marked the beginning of a new era in the relationship between the Indians and the Portuguese which lasted for 4 to 5 centuries.

The beach is ideal for relaxing and playing around with sand. Devi Temple, which is believed to be 800 years old, is situated on top of a rock near the beach. Karappula River at Elathur close to the beach is a good place for boating. Sunset is a great site to watch here, in the combination of Sea and River.

This place is very close to NH17 towards Mangalore. It is connected by frequent buses from Kozhikode.

#5 of 31 Places to Visit in Kozhikode

At a distance of 1 Km from Kozhikode Railway Station, Thali Temple is a 14th century temple dedicate to Lord Siva located in the heart of Kozhiode City.

This temple was destructed by Tippu Sultan and Hyder Ali during their invasion of Kozhikode and was later renovated. The two storied sanctum has artistic stone sculptures and wood carvings with scenes from the puranas. Very high walls and an expansive temple pond are some of the specialties of this temple. The temple complex also houses a shrine for Lord Krishna.

The temple is well known for the 'Revathi Pattathanam', an annual competition of pedagogic skills. The annual festival is celebrated for 8 days in the month of April / May.

#6 of 31 Places to Visit in Kozhikode

At a distance of 1.5 Kms from Kozhikode Railway Station, Mishkal Masjid (also known as Kuttichira Mosque) situated in Kuttichira was built by an Arab businessman called Mishkal in 13th century.

This mosque is built extensively with wood and Italian tiles. The entire structure is supported on 24 carved wooden pillars and there are 47 wooden doors. Nearly 300 people can pray in the ground floor alone. A strong influence of Kerala temple architecture can be seen in the construction of this mosque.

A unique feature of the mosque is a square tank, similar to those in temples. A part of the mosque was destroyed by the Portuguese in 1510. The local ruler has helped in defending and repairing the mosque. The mosque was initially a 5 storied, but after the destruction, it remained as a 4 storied structure.

#7 of 31 Places to Visit in Kozhikode

At a distance of 38 Kms from Kozhikode, Payyoli Beach is a beautiful stretch of golden sands located in Payyoli village close to NH17 towards Mangalore (before Vadakara).

Payyoli is one of the most outstanding tourist spots in this region with several thousands of tourists visiting the beach every week. The beach is ideal for water sports and sun-bath. The beach has a stretch of coconut palm trees which enhances the beauty of this lovely beach. This is a good place for swimming.

Trikkottur Perumalpuram Temple is nearby attraction. This is the home town of India's sprint queen P.T Usha.

Payyoli is connected with frequent buses from Kozhikode.

#8 of 31 Places to Visit in Kozhikode

At a distance of 51 Kms from Kozhikode & 3 Kms from Vadakara, Lokanarkavu Bhagavathy Temple is famous for beautiful murals and carvings.

Dedicated to Goddess Durga, the main temple is believed to be more than 1500 years old. There are also two separate shrines dedicated to Vishnu and Siva. It has great historical importance as Thacholi Othenan, the legendary martial hero of Kerala, used to worship here every day.

#9 of 31 Places to Visit in Kozhikode

At a distance of 6 km from Kodencheri, 32 km from Kalpetta, & 48 km from Kozhikode, Thusharagiri Falls is a scenic waterfall located in the Kozhikode district of Kerala, India. This is one of the most beautiful waterfalls in Malabar region and among the most popular places of sightseeing in Wayanad.

Thusharagiri literally means 'snowcapped mountains'. Two streams originating from the Western Ghats meet here to form the Chalippuzha River. The river diverges into three waterfalls creating a snowy spray, which gives the name - Thusharagiri. The highest of the three falls is the Thenpara Fall dropping from a height of 75 meters. The first waterfall can be reached easily while the remaining two falls can be reached from the first one by trekking through thick forest. A 5 km upstream trek will take one to the origin of the stream.