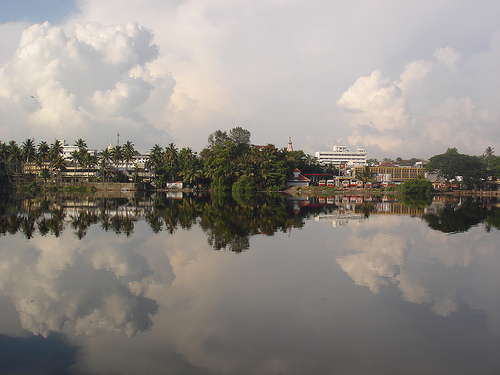 At a distance of 69 km from Trivandrum, 83 km from Alleppey, 94 km from Kottayam, 135 km from Kochi, and 156 km from Kanyakumari, Kollam, also known as Quilon is an old seaport city in Kerala. Lies between the Ashtamudi Lake and Lakshadweep Sea, Kollam is the headquarters of the Kollam district, and among the must-include places in Kerala tour packages.

Situated on the shores of Ashtamudi Lake, Kollam is the southern gateway to the backwaters of Kerala and one of the prominent places to visit near Kochi and Trivandrum. Thirty percent of this district is covered by Ashtamudi Lake. The eight-hour boat trip between Kollam and Alappuzha is the best way to explore the Kerala backwaters. It is also very famous for cashew processing and coir manufacturing.

Kollam was a flourishing port during the Chera dynasty and later became the capital of the independent Venad or Kingdom of Quilon. Kollam had a strong commercial reputation since the days of the Phoenicians and Romans. Desinganadu Rajas exchanged embassies with Chinese rulers while there was a flourishing Chinese settlement at Kollam. It was considered as one of the five main ports dealing with Chinese trade in the 14th century. In 1502, the first trading center was established in Kollam by the Portuguese. The Portuguese were followed by the Dutch and then the British in 1795.

Kallada Boat race is one of the famous celebrated events in Kollam. This boat race attracts a large number of tourists and is usually held on the 19th of January along with the great elephant march simultaneously. Kollam can be visited along with Trivandrum tour packages.

The best time to visit Kollam is from October to March, while the peak seasons are from November to January. It usually takes 1-2 full days to explore this area.

How to Reach Kollam - Full Details

Top 10 Places to Visit in Kollam

At a distance of 2 km from Kollam Railway Station, Ashtamudi Lake is a beautiful lake situated in the Kolla district of Kerala. It is the southern gateway to the backwater of Kerala, and among the most visited tourist places in Kollam.

Spread over an area of 16 km, Ashtamudi Lake is the second largest lake in Kerala, after Vembanad Lake, which has found its way into the sea through the Neendakara estuary. The 8 arms or channels of the Ashtamudi Lake are what gave it its name. The lake resembles the shape of a palm conifer or an octopus.

Surrounded by lush green trees and swaying coconut palms, Ashtamudi Lake is famous for its panoramic views. Boating is offered in the lake by The Kollam Boat Club. It is the entrance to the famous backwaters of Kerala and the houseboat rides here are extremely famous. The Kollam to Alappuzha route is considered among the best in the backwaters. A lot of tourists come here .....

At a distance of about 26 km from Kollam & 48 km from Trivandrum, Papanasam Beach is located in the coastal town of Varkala in Kerala. It is one of the popular beaches near Trivandrum, and among the major Kollam tourist places.

Varkala is the second-best Kerala beach resort after Kovalam. Varkala Beach, also known as Papanasham Beach, is a cliff beach situated on the coast of the Arabian Sea. Often called the Pearl of the Arabian Sea, this is the only place in southern Kerala where cliffs are found adjacent to the Arabian Sea. These cliffs are of tertiary sedimentary formation and are named by geologists as Varkala Formation. They are a geological monument as recorded by the Geological Survey of India.

The beach is renowned for its natural spring which is considered to have medicinal and curative .....

The Mahatma Gandhi Park situated at the southern end of the beach is an added attraction. The beach offers beautiful views of sunset and it is ideal for swimming.

At a distance of 5.5 Kms from Kollam Railway Station, Thirumullavaram Beach is a beautiful beach with full of coconut palms.

This beach is excellent for bathing and swimming. Mahavishnu Temple near the beach is a worth visiting place.

At a distance of 4 Kms from Kollam Railway Station, Thangasseri Beach is a beautiful & historical beach on Ariabian Sea. This place was a Portuguese settlement in 15th/16th century and later changed hands between Dutch & British.

Thangasseri beach is a wonderful place to spend an evening and watch the lovely sunset. The beach is adjacent to Kollam Fort. At north-east corner of the beach, the ruins of Thangasseri Fort built in the 18th century are also interesting to visit. Lighthouse situated close to the beach is worth visiting. Built in 1902, the majestic Lighthouse is 144 feet tall. Lighthouse is open to public between 3:30 PM & 5:30 PM.

Feb to Nov is the best time to visit Thangasseri Beach.

At a distance of 18 Kms from Kollam and 6 Kms from Varkala, Kappil Beach is a famous weekend gateway from Tivandrum.

Sprawls across 25 acres of land, the thin line of sand beach separates Edava-Nadayara Lake from the Arabian Sea. Swimming, water sports and Sun-bathing are famous activities at this spot. Boating is available in the backwaters of the lake at Priyadarshini Boat Club and Lake Sagar Boat Club near Beach. Dolphins are an added attraction on the Kappil Beach.

At a distance of 68 km from Kollam, 39 km from Tenkasi & 73 km from Trivandrum, Thenmala Dam also known as Kallada Dam or Parappara Dam located in Thenmala village is built across Kalla River. It is situated very close to Kollam - Tenkasi road. The dam is located amidst picturesque location with beautiful surroundings at the foothills of the Western Ghats.

The surroundings of Thenmala Dam are developed under eco-tourism development activities. It is also selected by World Tourism Organisation as one of the best eco-friendly projects in the world. Thenmala means honey hill. Due to the peculiar floristic composition of the forest, the honey collected from Thenmala forest is famous for its medicinal values.

This place has facilities like winding pathways, sway bridge, amphitheatre and a musical fountain. You can also visit the traditional tree houses of the tribal of this area. There are also boating facilities in the reservoir. .....

At a distance of 29 km from Tenkasi, 81 km from Kollam, & 86 km from Trivandrum, Palaruvi Waterfall is a wonderful waterfall located at Aryankavu. Situated on Kollam - Tenkasi road, it is one of the popular waterfalls in Kerala, and among the must-visit places during Kollam trip.

Palaruvi Waterfalls, which literally translates to 'Stream of Milk', cascades down through rocks from a height of about 300 feet. It is one of the most beautiful waterfalls near Trivandrum. The waterfall is surrounded by lush green valleys and natural herbal groves, which makes this waterfall, rich in medicinal properties.

Regarded as one of the most famous Kollam sightseeing places, the Palaruvi Waterfall is known to have ayurvedic properties. Locals believe that .....

At a distance of 16 km from Kollam, Paravur is a beautiful place with a combination of Sea, Lakes, Rivers, Backwaters, and vast green fields. This is one of the fabulous places in Kerala and among the must-include places in Kollam tour packages.

Paravur town has a small lake that merges with the backwaters of Kerala. The mangroves standing along both sides of the lake intensifies its beauty, making it more attractive. This lake is popular and significant as it connects as a part of the Trivandrum-Shornaur Canal System to the Edava and Ashtamudi Kayal.

Another real fascination in the region of Paravur lake is the Priyadarshini watercraft club. This watercraft club uncovers immense boating choices in the realm where the Arabian Sea, river, and the Kappil backwater merge. With a thin stretch of narrow land dividing the sea and Pravur lake, the beach at Paravur is ideal to sit and gaze at the natural beauty.

At a distance of about 26 km from Kollam, Janardhana Swamy Temple is located in Varkala, which is a coastal town on the banks of Arabian Sea.

Situated on top of a small hillock near Papanasam Beach, this temple is believed to be 2000 years old. The temple is dedicated to Lord Vishnu and Hanuman and it is important for 'Pithrutharpanam'. The temple was maintained by the Pandya Kings.