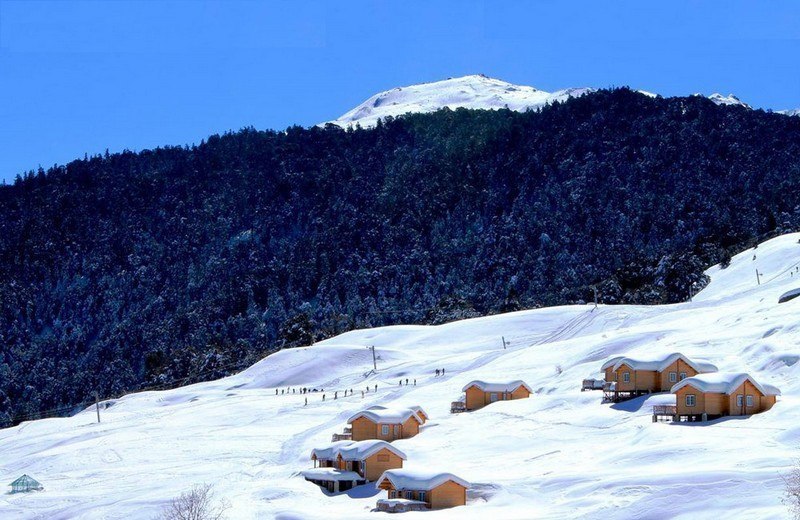 Auli, also known as Auli Bugyal which means meadow in Garhwali, is located at an average altitude of 2800 m in the Garhwal Himalayas. Earlier, Auli was a prominent trade centre and the trails of Auli were frequently traversed by the semi-nomadic Bhotiya tribes who maintained barter trading with Tibet for centuries. According to legend, the revered Guru Adi Shankaracharya visited Auli during 8th century AD. He built a math at Joshimath, which still is intact and is known by the name Shankaracharya Tapastali.

Auli is also a beautiful ski destination, but less known compared to Shimla, Gulmarg and Manali. It was only in the recent time, after the creation of new state Uttarakhand, Auli was marketed as a tourist destination. Today, Auli is known for its snow covered slopes and panoramic views of the surroundings. The slopes of Auli were the training ground for the Indian Paramilitary Forces and Indo-Tibetan Border Police Force.

Skiing in Auli attracts large number of tourists. Auli has been the venue of Skiing Festivals since 1986. Today it also hosts National Championships, organized by Winter Games Federation of India, in the months of February and March. The Garhwal Mandal Vikas Nigam (GMVN) provides skiing courses for beginners and professionals at Auli, which are held for 7 to 14 days from December to March. Trekking is the most popular activity in summer and it provides a wonderful opportunity to explore the Garhwal Himalayas.

Auli has limited accommodation facilities. The GMVN Skiing and Tourist Resort is a convenient place to stay as it has all the necessary facilities. Tourists also have an option of staying in tents at the Joshimath Char Dham Camp.

The best time to visit Auli is from November to March for Skiing and April to June for trekking.

How to Reach Auli

How to Reach Auli - Full Details

Top 10 Places to Visit in Auli

At a distance of 13 km from Joshimath, Auli is a famous skiing destination of Uttarakhand run by Garhwal Mandal Vikas Nigam (GMVN). It is considered among the most preferred skiing destinations for professional skiers and adventure lovers. Auli Cliff Top Club is one of the prime ski resorts of the region and is run and maintained by Garhwal Mandal Vikas Nigam. All the facilities and equipment for skiing are provided by the resort. To save time for skiers in climbing back again and save energy, there is a chairlift and ski lift, which is the longest ski lift in the country.

A 3 km long slope ranging from a height of 2519 to 3049 m is a major attraction. The entire skiing area at the resort can be divided into the upper fields and lower fields and they are kept in good condition always by snow beaters. The slopes in Auli are covered with Oak and Deodar forests.

The GMVN provides courses for beginners and professionals at Auli, which are held for 7 to 14 days from December to .....

At a distance of 3 km from Auli, Gurso Bugyal or Gorson Bugyal is a huge meadow spread amidst a mixed forest of oaks and conifers. Situated at an elevation of 3,056 m, Gurso Bugyal transforms into an eye-catching green beauty during spring and covered with snow during winters. The place offers imposing views of Nanda Devi, Trishul and Dron Parvat peaks. The view of these mountains while walking along the nature trails is truly majestic. It is about 1.5 km from the last tower of the Auli Ropeway.

A short but adventurous trek of 3 km will lead to Gurso Bugyal. As there is no accommodation available here one can only admire the scenery during the day and return to Auli by night. Travellers can also head towards Chattarkund, which is 1 km away from Gurso Bugyal. Chattarkund is famous for its sweet water and is located in the centre of a dense forest.

At a distance of 23 km from Joshimath and 35 km from Auli, Bhavishya Badri, also spelt as Bhabisya Badri, is situated near Subhain village of Niti Valley on the way to Lata from Tapovan in Uttarkashi district of Uttarakhand.

Bhavishya Badri is one of Panch Badri temples located at a height of 2744 m above sea level. The presiding deity of this small temple is Lord Narsimha, an incarnation of Lord Vishnu and known to be the future seat of Badrinath. According to the legend of Bhavishya Badri, at the end of Kali Yuga, a landslide will occur collapsing Nara and Narayan hills and blocking the path to Badrinath. This devastating landslide will occur when the right arm of the statue of Narasimha currently situated in Joshimath detaches from its body. Then, Badrinath will appear at the Bhavishya Badri temple and be worshipped here, instead of the Badrinath shrine.

Bhavishya Badri can be reached via Saldhar which is 18 km by road .....

At a distance of 20 km from Auli, 27 km from Joshimath, 21 km from Tapovan & 17 km from Gurson Bugyal, Kuari Bugyal is a famous meadow known for untouched beauty of Himalayas situated at an altitude of 3350 m. It is well known for one of the famous trekking trails in Uttarakhand, Kuari Pass Trek.

Kuari Bugyal is perfect place for trekking. During summer season, tourists throng to this place to explore the trekking trails of this beautiful region. Lord Curzon made the trek to Kuari Pass, and since than it has come to known as Curzon's trail. It is very popular among European and American travelers.

There are four trekking routes to reach Kuari Pass with different starting points at Auli, Ghat, Joshimath and Tapovan. The Ghat route is the longest trail with a length of 40 km spread across 4-5 days while Auli route is shortest which is 20 km long and take about 3 days. All the trails reach Gailgarh, from where Kuari Pass is scaled on same day and returned back to the base camp. .....

At a distance of 20 km from Chamoli Gopeshwar, 23 km from Karnaprayag, 74 km from Auli and 60 km from Joshimath, Nandaprayag is a town and a nagar panchayat in Chamoli district of Uttarakhand. Situated at an altitude of 870 m, it is a well known places of pilgrimage in Uttarakhand state.

Nandaprayag was once the capital of Yadu Kingdom. Raja Nanda performed yagna on a stone which was later used as the foundation of the Nand temple situated in Nandaprayag. According to the legend, Raja Nanda was .....

At a distance of 1 km from Auli GMVN, Auli Artificial Lake is one of the world's highest manmade lakes, situated beside the Cliff Top Club. This lake was developed by the government in view of creating artificial snow on the new ski slopes at the time of low snow fall. Water from the lake is used to feed the snow guns stationed along the ski slopes. It assists in providing good skiing surface to help extend the ski season.

According to legend, Pandukeshwar was established by King Pandu, father of great Pandavas of Mahabharata epic. He was living with his wives Kunti and Madri in Pandukeshwar after giving his throne to his elder brother Dhritharashtra. One day Pandu went on hunting in the jungle and unintentionally killed a sage making love in deer form. While the sage was dying he cursed Pandu that he will not be able make love with anyone and if he does, he will die instantly. To get cleanse of sin of killing of the sage, Pandu installed the bronze image of Vishnu in the Yogadhyan Badri shrine and mediated. Meanwhile Kunti and Madri gave birth to Pandavas through .....