GANDIKOTA TOURISM | PLACES TO VISIT IN & TRAVEL GUIDE TO GANDIKOTA 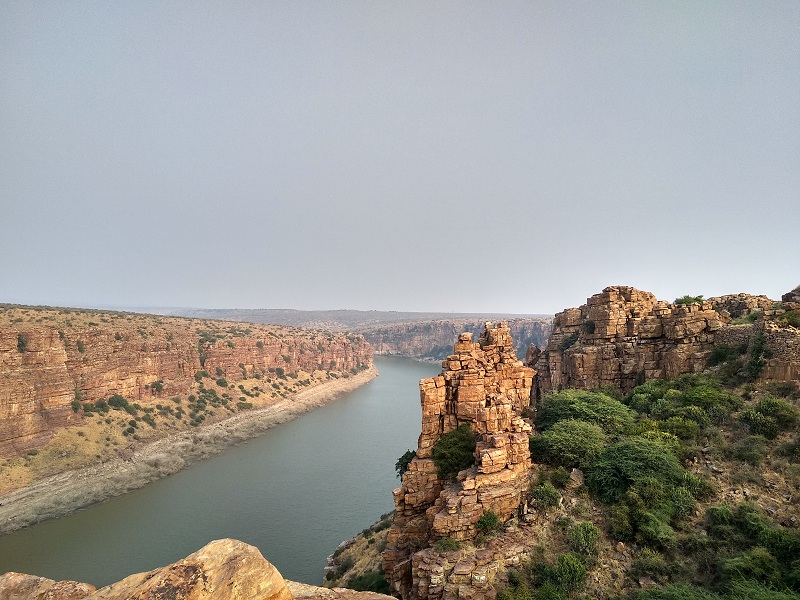 At a distance of 15 km from Jammalamadugu, 94 km from Kadapa, 155 km from Kurnool, 233 km from Tirupati, 280 km from Bangalore, 386 km from Hyderabad and 391 km from Chennai, Gandikota is a small village in Kadapa district of Andhra Pradesh. Situated on the banks of Pennar River, it is one of the popular historical places to visit in Andhra Pradesh and among the weekend gateways from Hyderabad as well as from Bangalore.

Gandikota is a small village spread in and around the historical Gandikota Fort. According to history, Gandikota area was first identified and made Sand fort in 1123 CE by Kapa Raja of nearby Bommanapalle village and a subordinate of Ahavamalla Someswara I, the Western Chalukyan king of Kalyana. The village transformed into major fort after the emergence of the Kamma kings, who ruled Gandikota more than 200 years. The fort fell into hands of Qutub Shahis of Golconda in 1650 CE. The medieval fort of Gandikota is named after the adjoining gorge which means gandi in Telugu. It is also believed that Vemana, the Telugu poet lived in Gandikota area for a short period.

Known to few ardent travelers, Gandikota is not the usual tourist hub as it is neither a world heritage site, nor is it marketed well by state tourism agencies. This untouched and unexplored place is worth a visit for history buffs as well as nature lovers. A frozen in time village in the middle of centuries old structures such as forts and temples is known for its spectacular gorge formed by river Pennar that cuts through the Erramala hills, also known as Gandikota hills. This stunning piece of Nature's architecture has come to be known as the Hidden Grand Canyon of India by travelers who visit and get bewitched by its beauty.

Apart from the unparalleled beauty of the gorge, there are several other attractions in and around the village that allure visitors, the most special being the ancient Gandikota Fort. The magnificent Gandikota Fort, one of the most impregnable strongholds of its time, has remains of temples, a granary, a royal pond and a mosque and is today scattered with ruins. The fort is built in such a way that the gorge provides a natural defence on its west and north sides. One can also visit Mylavaram Dam nearby and do some boating in the serene waters of the reservoir. The sight of distant windmills with small stretches of visible roads along with pretty hues painted in the sky during the sunset is worth experience during your Gandikota trip. One can also visit Belum Caves, Owk Reservoir, Lepakshi and Banaganapalle along with Gandikota.

The government run Haritha Resort is the only option for overnight stay in Gandikota. It has just 10 rooms so better to book in advance on weekends. There are multiple camping areas outside the Fort and on the banks of the Pennar River for those who are looking for quirky stay options and wish to sleep under the stars with the river gushing beside you.

September to March is the best time to visit Gandikota as the weather is pleasant and comfortable for sightseeing while the summer months are hot and humid with soaring temperatures.

How to Reach Gandikota - Full Details

Top 10 Places to Visit in Gandikota

#1 of 8 Places to Visit in Gandikota

At a distance of 1 km from Gandikota Bus Stop, Pennar River Gorge is a viewpoint situated in the small village of Gandikota. Often called as the Grand Canyon of India, it is one of the must visit places in Gandikota.

The Pennar Gorge is formed by river Pennar that cuts through the Erramala hills also known as Gandikota hills. A gorge is a narrow valley between hills or mountains, typically with steep rocky walls and a stream running through it. In fact, gorges are formed because of rock erosion over a long period of time. The Pennar River gorge is almost 300 feet deep from the cliff. It is difficult to imagine that the Pennar River in Gandikota could carve such a huge gorge but the continuous flow of its water eventually cut a deep trench through the landscape, exposing many layers of rock and creating the spectacular site we see today.

Due to the striking similarity with Grand Canyon of Arizona, this stunning piece of Nature's architecture has come to be known as the Hidden .....

#2 of 8 Places to Visit in Gandikota

At a distance of 1 km from Gandikota Bus Stop, Madhavaraya Temple is an ancient Hindu Temple situated inside the fort complex of Gandikota, Andhra Pradesh. Located in the west of Gandikota village, it is one of must visit in Gandikota.

Madhavaraya Temple is dedicated to Lord Vishnu and is believed to have been built during the reign of Sri Krishna Deva Raya of Vijayanagara Kingdom. This is the grandest structure in Gandikota or perhaps, in the entire region. The main deity from the sanctum sanctorum of the temple was shifted to Mydukuru after the Nizams finally broke the fort security. Though the sanctum sanctorum is empty but the ornately decorated mandapa is still intact.

The Madhavaraya temple displays a fascinating architecture with many sculptures of Hindu Gods and everyday rituals of common people carved on its pillars and walls. The five storey Madhavaraya temple tower dominates the skyline of Gandikota which can be seen from any edge of the town. It is an excellent .....

#3 of 8 Places to Visit in Gandikota

At a distance of 500 m from Gandikota Bus Stop, Raghunatha Swamy Temple is an ancient Hindu Temple situated inside the fort complex of Gandikota, Andhra Pradesh. Adjacent to Jamia Masjid, it is one of prime places to visit in Gandikota.

Raghunatha Swamy Temple in Gandikota is a complex system of pillars, hallways, and corridors. Though there is no statue inside the sanctum, but remnants of the temple are ideal for photographers. Made out of red granites, the temple is a small one but the architecture and sculptures in the premises are typical of Vijayanagara temples.

The sheer size temple is currently in ruins but there are mantapas and pillars along the perimeter of the temple. The carvings on the walls and pillars are still quite impressive. The Dasavathara stories have been sculpted on the pillars. Lord Narasimha killing Hiranyakasipu is the notable one.

One can take a leisurely walk along the temple premises and even witness some boulders with legible inscriptions .....

#4 of 8 Places to Visit in Gandikota

At a distance of 500 m from Gandikota Bus Stop, Jamia Masjid is an ancient mosque situated inside the Gandikota Fort. Also known as the Central Mosque of Gandikota, it is one of the must visit places in Gandikota as part of Bangalore 2 day trip.

Spread over miles, the massive 12th century Gandikota fort, made in red sandstone, comprises of gorgeous palaces with intricate carvings, religious places and a 5 mile perimeter wall. Jamia Mosque is one of the most noted architectural masterpieces inside the fort complex. Located besides a Hindu temple, the mosque set a great example of unity in diversity. The mosque was later addition to the fort than the temple of Raghunatha.

With simple architecture, the Jamia Mosque of Gandikota is quite grand in size and looks similar to Charminar in Hyderabad. Though the walls of the mosque have lost its sheen over time, it still manages to bewitch travelers with its simple, yet elegant Islamic architecture. Visitors of the masjid are first .....

#5 of 8 Places to Visit in Gandikota

At a distance of 10 km from Gandikota, Mylavaram Dam is a medium irrigation project built across Penna River near Mylavaram in Kadapa district of Andhra Pradesh. It is one of the beautiful reservoirs on River Pennar and among the must visit Gandikota Tourist Places.

Also known as Tatireddy Narasimha Reddy Reservoir, Mylavaram Dam is an earthen dam constructed for providing irrigation potential to an extent of 75,000 acres. The construction of the project and formation of canals were completed by the end of 1981-82 and the distributary system was completed by 1985-86. The reservoir has a gross storage capacity of 9.96 tmc. The reservoir consists of two main canals viz. MR South Canal & MR North Canal having an extent of 25,000 acres & 50,000 acres of ayacut respectively. With the completion of Srisailam right bank canal, Krishna River water would be fed from Srisailam Dam to this reservoir.

The dam view is amazing and one can see a museum nearby. It is a nice place to visit .....

#6 of 8 Places to Visit in Gandikota

At a distance of 6 km from Owk, 10 km from Belum Caves, 34 km from Yaganti, 56 km from Jammalamadugu and 70 km from Gandikota, Owk Reservoir is an earthen dam built across Paleru River near Owk in Kurnool district of Andhra Pradesh. It is one among the popular places to visit in Gandikota.

Built in 1946, Owk Reservoir is a balancing reservoir comprising of three smaller dams namely Paleru, Gollaleru and Thimmaraju Cheruvu. Previously the Paleru and Thimmaraju earth dams are the tanks feeding water to Owk village ayacut of approximately 600 acres and 2000 acres respectively. These tanks were converted into Owk Reservoir by raising its bund to 220 feet height. Now, the reservoir has internal area of more than 1000 acres and it is main source of irrigation in Rayalaseema region and also providing drinking water facility to nearby villages and towns.

Recently, AP Tourism has set up a boat club in backwaters of Owk Reservoir in order to attract tourists. Tourists can indulge in .....

#7 of 8 Places to Visit in Gandikota

#8 of 8 Places to Visit in Gandikota