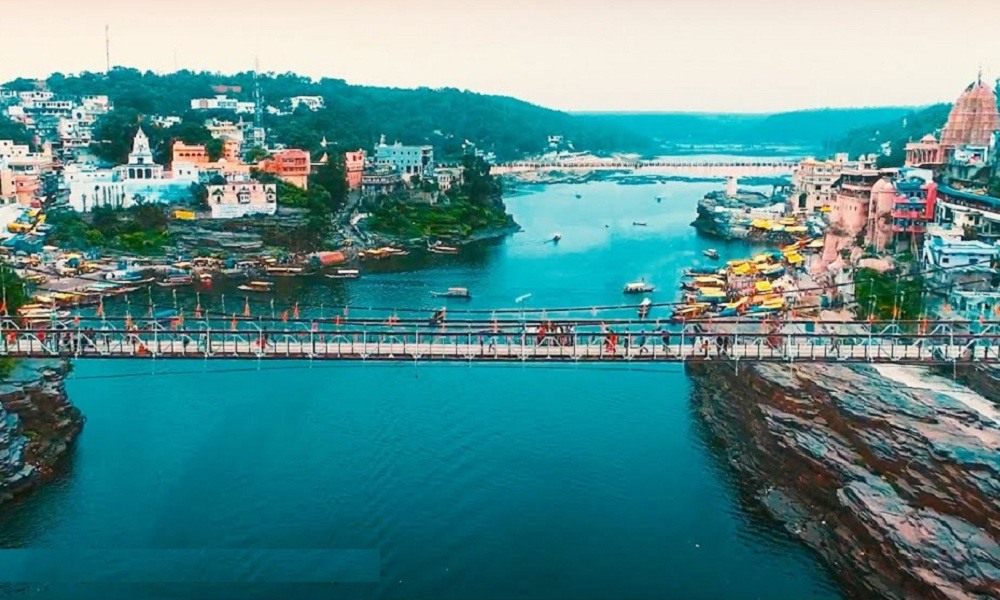 At a distance of 69 km from Khandwa, 76 km from Indore, 102 km from Mandu, 137 km from Ujjain, 256 km from Bhopal, 313 km from Pipariya, 390 km from Chhindwara, 399 km from Vadodara, 416 km from Narsinghpur, 446 km Ahmedabad, and 508 km from Jabalpur, Omkareshwar is a famous pilgrimage center located on the island of Mandhata in Khandwa district of Madhya Pradesh. It is one of the 12 revered Jyotirlinga shrines of Shiva, and among the must include places in Madhya Pradesh tour packages.

The holy town of Omkareshwar is situated on an island called Mandhata or Shivapuri in the Narmada River. The shape of the island is said to be like the Hindu symbol 'OM', due to the merging of two valleys and a central pool of Narmada waters, hence the name Omkara, the other name of Lord Shiva. It is also a hill that is surrounded by waters of the Narmada on all sides. Omkareshwar is one of the prominent pilgrimage places to visit near Indore.

According to Mythology, King Mandhata worshipped Lord Shiva here. Pleased by his devotion, Lord Shiva gave him a darshan, conferred his eternal light, and remain here as Omkareshwar in the Omkareshwar Temple, among the must include places in Omkareshwar tour packages. Subsequently, the mountain is named as Omkar-Mandhata. Another legend has it that Vindhya, the deity controlling the Vindhyachal mountain ranges was worshipping Lord Shiva to cleanse his soul of the sins committed by him. He created a sacred Lingam with sand and clay. Impressed by the worship, Lord Shiva appeared before him in two forms- Omkareshwar and Amareshwar. The third story from Hindu scriptures says that once upon a time there was a great war between gods and demons, in which demons won. This was a major setback for gods and hence gods prayed to Lord Shiva. Pleased with their prayer, Lord Shiva emerged in the form of Omkareshwar Jyotirlinga and defeated danavas or demons.

Being one of the major pilgrimage centers in Madhya Pradesh, Omkareshwar celebrates a few festivals with great enthusiasm. Maha Shivratri is one of the most important festivals celebrated in Omkareshwar when the whole island is decorated with lights and many pilgrims make it a point to visit the Omkareshwar temple. Kartik Poornima is another important festival celebrated here. A huge mela or fair is held in Omkareshwar throughout the day and Omkareshwar Puja is carried on with full zest. Besides, Omkar Mahotsav is another popular event, held in December every year that attracts a huge number of devotees and tourists.

Ranging from budget to medium, there are several accommodations available in Omkareshwar which helps the tourists to stay and explore the nearby places.

With a pleasant and cool climate, October to March is the best time to visit Omkareshwar for sightseeing. However, one can also visit the town during the monsoons as rains are mostly average here. The town is also very attractive during the festive season of Maha Shivratri. The summer days are hot and tough so it is hard for the visitors to explore the city.

How to Reach Omkareshwar - Full Details

Top 10 Places to Visit in Omkareshwar

#1 of 8 Places to Visit in Omkareshwar

At a distance of 1 km from Omkareshwar Bus Station, Omkareshwar Temple is a revered Hindu temple located in the Omkareshwar town of Madhya Pradesh. Perched on an enticing island of Mandhata or Shivapuri in the Narmada river, it is one of the holiest shrines in India, and among the must include places in Omkareshwar Tour Packages.

Dedicated to Lord Shiva, the Omkareshwar Jyotirlinga is one of the 12 revered jyotirlinga shrines of Lord Shiva in India. According to legend, Vindhya, the deity controlling the Vindhyachal mountain ranges was worshipping Lord Shiva to cleanse his soul of the sins committed by him. He created a sacred Lingam with sand and clay. Impressed by his devotion, Lord Shiva appeared before him in two forms- Omkareshwar and Amareshwar. The island is said to be in the shape of the Hindu 'OM' symbol which makes this land even more divine.

The temple boasts Nagara-style architecture with its detailed and intricate carvings. This 5 storied temple has a grand Sabha .....

#2 of 8 Places to Visit in Omkareshwar

At a distance of 1 km from Omkareshwar Bus Station, Mamleshwar Temple is a sacred Hindu temple located in the holy town of Omkareshwar, Madhya Pradesh. Situated right opposite the Omkareshwar temple on the southern bank of the Narmada River, it is one of the popular temples in Omkareshwar, and among the must-visit places as part of Omkareshwar Packages.

Also known as Amleshwar or Amareshwar temple, the Mamleshwar temple is located on the southern bank of Narmada, near the Gomukh ghat it is on the mainland. It is widely believed that a pilgrimage to the Omkareshwar isn't complete without paying obeisance to the Amareshwar of Mamleshwar temple as it is believed to houses half of the 4th Jyotirlinga, the other half is in Omkareshwar Temple. According to folklore, the Mamleshwar is the Shiva lingam built by the Pandavas during their exile from the Mahabharata era. While another popular Omkareshwar lore proclaims that the existence of Mamleshwar jyotirlinga goes back to Vedic times, when .....

#3 of 8 Places to Visit in Omkareshwar

Built-in 11th century, Kedareshwar Temple is dedicated to Lord Kedar, another manifestation of Lord Shiva. It boasts of intricate architecture. The temple also bears an uncanny resemblance to the Kedarnath temple in Uttrakhand. Due to this reason, it remains one of the prominent places to visit in Omkareshwar. The religious significance of the place attracts devotees and tourists from all over the world. The temple is located on the path of Parikarma and offers a majestic view of the surroundings.

#4 of 8 Places to Visit in Omkareshwar

Dedicated to Lord Shiva, the Siddhanath Temple is a 13th-century temple built in Brahminic and Indo Nagara architecture style. Situated on a plateau on the Mandhata island, the temple is architecturally one of the most visually stunning monuments in the whole of Omkareshwar and is a protected monument. The temple is the perfect example of ancient Indian ingenuity and architectural prowess. The temple was attacked by Mahmud of Ghazni but it still stands tall symbolizing its strength.

Siddhanath Temple is situated nearly at the end of the Omkareshwar Parikrama. It is supported by a huge podium whose 4 sides have been ornamented with figures and mural art paintings. The frescos .....

#5 of 8 Places to Visit in Omkareshwar

Located on Omkar Parikramapath, Gauri Somnath Temple is believed to have been built in the 11th century AD and is one of several shrines dedicated to Lord Shiva in Omkareshwar. The temple is very well known for its huge Shivlinga and statue of Nandi. Legend says that the temple lingam had the ability to show future births until it was damaged by Emperor Aurangzeb, after which the powers were lost forever. Also, no one apart from an uncle and nephew pair can touch their hands while embracing the lingam from opposite ends.

Gauri Somnath Temple has been constructed in the Bhumji style of architecture. The temple has three storeys and has the shape of a peahen. With its rising curvilinear .....

#6 of 8 Places to Visit in Omkareshwar

At a distance of 1 km from Omkareshwar Bus Station, Sri Govinda Bhagavatpaada Cave is a religious place located in the Omkareshwar town of Madhya Pradesh. Situated on an enticing island of Mandhata or Shivapuri in the Narmada river, it is one of the top Omkareshwar Tourist Places.

Considered very religious by the Hindus, this cave has a main hall and a small sanctum with a Shivalingam. This is believed to be the place where the great saint Sri Adi Shankaracharya met his guru Govinda Bhagavatpada exactly 2520 years back and took spiritual education and his deeksha under his guru. It is also believed that Shankaracharya saved the town from a big flood by forcing the river water into a kamandal (small bowl), which he had placed .....

#7 of 8 Places to Visit in Omkareshwar

At a distance of 1 km from Omkareshwar Bus Stand, Parikrama Path is a circumambulatory marg around Omkar Hil in the holy town of Omkareshwar. It is one of the top things to do in Omkarshwar.

The Omkar Parikrama Path starts from the Ghat on Mandhata Island. According to Hindu mythology, a walk around a positive source of energy provides one with positive energy too. It is considered to be a sacred thing and what better way to do it than a parikrama across the entire island. The route stretches about 8 km and takes around 3 hours to complete and is not very difficult. The whole area is also very picturesque as this stretch is along the island.

Visitors to Omkareshwar can do the parikrama of Omkareshwar by going around the hill. However, there are ups and downs in the form of stairs and one can see several ashrams and temples en route. The route includes the confluence of the two rivers.

#8 of 8 Places to Visit in Omkareshwar

At a distance of 56 km from Indore, 197 km from Bhopal, 265 km from Kota, 266 km from Chittorgarh, 336 km from Udaipur, 341 km from Vadodara, 389 km from Ahmedabad, 455 km from Tikamgarh, 485 km from Surat, 516 km from Jaipur, Ujjain is an ancient city situated in the Malwa region of Madhya Pradesh. It is one of the holiest cities of India, and among the must include places in Madhya Pradesh tour packages.

Situated on the banks of the Kshipra River, Ujjain is one of the divine lands in Madhya Pradesh which fascinates its tourists with its religious significance. It is one of the prominent places to visit near Indore. The ancient city is known as the temple city for its numerous temples from different eras including one of the 12 Jyotirlingas the Mahakaleshwar Temple. It is one of the four sacred sites in India, where the famous 'Kumbh Mela', the world's largest religious gathering, .....