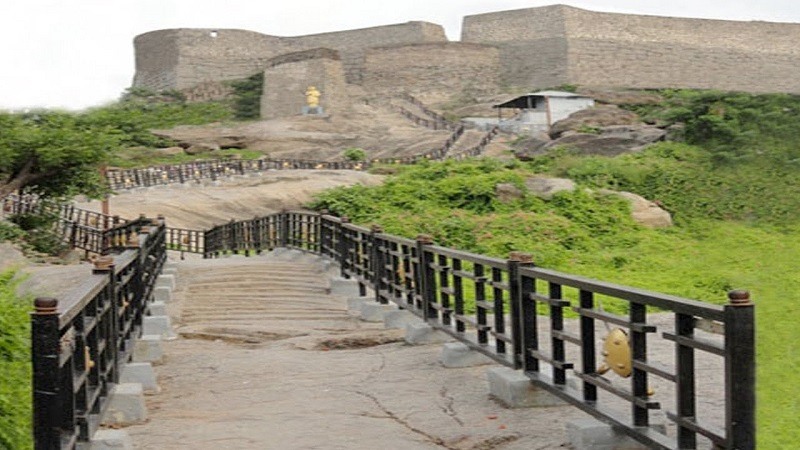 At a distance of 198 km from Hyderabad, 128 km from Vijayawada and 119 km from Warangal, Khammam is a town and headquarters of Khammam district. Situated on the banks of Munneru River, a tributary of Krishna River, Khammam is one of the top Telangana tourist places.

Khammam is well connected by Road and Train from Hyderabad and Vijayawada. It is hardly 2 hours drive from Vijayawada and 3 hours from Hyderabad. Khammam also has excellent public transportation facility. The Khammam railway station lies between Hyderabad - Vijayawada line and has frequent train connections.

How to Reach Khammam - Full Details

Top 10 Places to Visit in Khammam

#1 of 6 Places to Visit in Khammam

At a distance of 1.5 km from Khammam Railway Station, 120 km from Warangal and 196 km from Hyderabad, Khammam Fort is situated in Khammam town of Telangana.

Built during 950 AD by the Kakatiya rulers, the fort is an important tourist attraction in Khammam. Later, Musunuri Nayaks and Velama kings were involved in the expansion of the fort. Subsequently the Qutb Shahi kings developed the fort further.

The fort is situated on Stambhadri hill. It represents a combination of both Hindu and Muslim architectural influences. There are several mandapas and temples inside the fort. The fort and the temples located on top make the place a wonderful site to visit in Khammam. The steps constructed to reach the top have made access to the fort easier.

This fort was built with granite and has an area of around 4 square km. It also has a Masjid and Mahal including Ashoor Khanas constructed during Nizam period. The fort also houses several cannons that were used in the wars during Kakatiya .....

#2 of 6 Places to Visit in Khammam

At a distance of 22 km from Khammam, 111 km from Nalgonda and 200 km from Hyderabad, Nelakondapalli is an important Buddhist excavation site in Telangana located in Khammam District.

Nelakondapalli is a historic Buddhist site with Stupas and Buddha idols. The site was found during the excavations conducted in 1977. Excavations have unearthed foundations of brick built Viharas, wells, cisterns, a Mahastupa, a bronze idol of Buddha, a miniature Stupa carved in limestone and other materials from the third and fourth centuries.

Nelakondapalli is associated with the Hindu epic Mahabharata. The Virata Raju Dibba and Keechaka Gundam, archaeological evidences from the period of the Mahabharata are located 1.6 km from Nelakondapalli.

Nelakondapalli is also famous of being the Birth Place of Kancharla Gopanna, popularly known as Bhakta Ramadas who built popular Bhadrachalm temple. There are few ancient temples in the village of Nelakondapalli. The old Residence of Bhakta Ramadas .....

#3 of 6 Places to Visit in Khammam

At a distance of 22 km from Khammam, 39 km from Suryapet and 174 km from Hyderabad, Kusumanchi is situated in Khammam District of Telangana.

Kusumanchi was known as Krupamani in the Kakatiya period. It is home to Sri Ganapeshwaralayam and Mukkanteswaralayam, the two Siva temples built by the Kakatiya rulers during 12th and 13th centuries. These temples stand as testimony to the architectural skills of the Kakatiya kings. The historical shrines have a striking resemblance to famous Ghanpur and Ramappa temples of Kakatiya period in the Warangal district.

Ganapeshwaralayam is about 1.7 km from Kusumanchi Bus Stand. This temple constructed using stone resembling thousand pillars temple of Warangal in architecture. The Shiva lingam in the temple is three meters high with a radius of two meters and it is one of the biggest Shivalingas in the state. Built on an elevated platform facing east, the temple consists of pillared rangamandapa .....

#4 of 6 Places to Visit in Khammam

At a distance of 11 km from Palvoncha, 40 km from Bhadrachalam, 102 km from Khammam and 297 km from Hyderabad, Kinnerasani Dam is located at Yanambile in Khammam district of Telangana. The dam is situated inside Kinnerasani Wildlife Sanctuary.

The Kinnerasani Dam was constructed in 1966 on the Kinnerasani River, one of the important tributaries of Godavari River. The dam provides water to Kothagudem Thermal Power Station at Palvoncha for power generation. It also provides irrigation facilities to the nearby farmers through lift Irrigation.

Kinnerasani Dam is situated in a beautiful location surrounded by greenery and natural landscape. A Glass House constructed by Singareni Collieries at Kinnerasani has improved the spot as a tourism place. A deer park housing little over 80 spotted deer nearby the scenic Kinnerasani dam site is the major attraction for tourists. The vast Kinnerasani reservoir harbors number of crocodiles .....

#5 of 6 Places to Visit in Khammam

#6 of 6 Places to Visit in Khammam

At a distance of 10 km from Gudur Bus Stand, 51 km from Warangal, 88 km from Khammam Bus Station and 200 km from Hyderabad, Bheemuni Paadam Waterfalls is a picturesque waterfall located at Gudur in Warangal District of Telangana.

Bheemuni Paadam Waterfalls is the one of the best tourist places to visit in Warangal district. There is a rock in the form of Bheema's foot print, through which the water flows thus it is named as Bheemuni Paadam (Bheema's foot print). When sun rises and sets the water shines in rainbow colors which is an amazing sight. The water drops down from a height of about 70 ft to form a fool at the bottom. The flow of water is heavy in monsoon season. A cave beside the falls which is believed to be 10 km long is the other attraction here.

The approach road to the falls runs through thick forest and water streams. The waterfall is about 3 kms from Bhupathipet between Manoharabad and Narsmapet. While coming .....