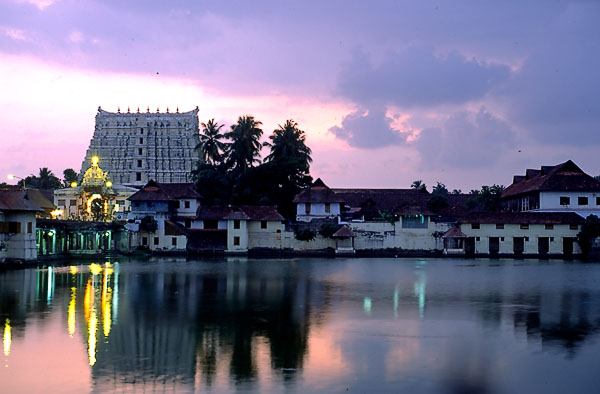 At a distance of 85 km from Kanyakumari, 204 km from Kochi, 266 km from Madurai, 385 km from Coimbatore, 400 km from Trichy, 770 km from Chennai, 622 km from Mangalore, and 746 km from Bangalore, Thiruvananthapuram, also known as Trivandrum, is the capital of the state of Kerala and the headquarters of Thiruvananthapuram district. It is one of the must-include places in Kerala tour packages.

Situated between the Western Ghats and the Arabian Sea, Thiruvananthapuram means the City of Lord Anantha in Sanskrit and Malayalam. The name derives from the deity of Anantha Padmanabha Swamy Temple, one of the must-visit places as part of Trivandrum tour packages. Trivandrum is located on the west coast of India near the extreme south of the mainland.

The city once formed a part of the kingdom of Travancore, which had its capital at Padmanabhapuram. Even now most of the buildings in the city possess the royal heritage of the Travancore Kings. As per historical records, Trivandrum was a famous port city during 1050 BC and it maintained trade relations with the Middle East and Mediterranean countries.

Trivandrum is a popular medical tourism destination and receives chartered flights for medical tourism, as there are more than a hundred recognized Ayurveda centers in and around the city. Medical tourism is further promoted by modern medical hospitals in the City. Recuperation facilities are available at five-star beach resorts and hill stations nearby. It is also considered one of the cleanest cities in India.

The major festivals in the city are Onam, Attukal Pongal & Aaraat of Padmanabha Swami Temple. Attukal Pongal is a 10-day annual festival which, is held at the Attukal Temple in Thiruvananthapuram every year.

Trivandrum is easily accessible by air, rail, and road. Trivandrum has great connectivity from major cities in India and countries like Dubai, Thailand, Malaysia, Singapore, the USA & Europe. There are direct trains from Trivandrum Central to all the major cities in Kerala like Chennai, Mangalore, New Delhi, Mumbai, Bangalore, Hyderabad, Madurai, etc. Trivandrum is well connected by bus from Chennai, Bangalore, Hyderabad, Pondicherry, Kochi, Mangalore and Mumbai. The city has two major bus stations. Long-distance buses operate from the Central Bus Station at Thampanoor, Short distance buses operate from the City Bus Station.

The best time to visit Trivandrum is from November-March while the peak season is August to September & January to March. It usually takes two full days to explore the important places in Trivandrum.

How to Reach Trivandrum - Full Details

Top 10 Places to Visit in Trivandrum

#1 of 35 Places to Visit in Trivandrum

At a distance of about 2 km from Trivandrum Central Railway Station, Sri Padmanabhaswamy Temple is a famous Hindu temple located in the Fort Area of Trivandrum city. It is one of the richest temples in India, and among the must-visit places as part of Trivandrum tour.

Dedicated to Lord Vishnu, Sri Padmanabhaswamy Temple is one of the 108 Divyadesams of Lord Vishnu and among the most sacred places of pilgrimage in Kerala. Although the origin of this temple remains a mystery, devotees believe it to have existed since the first day of the Kali Yuga, which was 5000 years ago. The Padmanabhaswamy temple also has a mention in the Bhagwad Gita. The scripture states that Balarama, the older brother of Lord Krishna frequented the temple, bathed in the Padmatheertham, and also made several offerings to the deity here.

#2 of 35 Places to Visit in Trivandrum

At a distance of about 2 kms from Trivandrum Central Railway Station, The Palace Museum is located in the Kuthira Malika Palace built by Maharaja Swathi Thirunal Balarama Varma, the King of Travancore. It is located in the Fort Area near Sri Anantha Padmanabha Swamy Temple.

It is a rare specimen of workmanship in the traditional Travancore style of architecture. The Museum displays paintings and various priceless collections of the royal family. The name Kuthira Malika means 'Palace of Horses' and is derived from the frieze of 122 wooden horses on the exterior walls. The Palace was constructed with teak, rosewood, granite and marble. The palace includes two thrones - one is made entirely from elephant tusks and the other from Bohemian crystal.

#3 of 35 Places to Visit in Trivandrum

At a distance of about 3.5 km from Trivandrum Central Railway Station, the Napier Museum is an art and natural history museum situated in Thiruvananthapuram, Kerala. Also known as Government Art Museum, it is one of the popular museums in Kerala, and among the most prominent places of sightseeing in Trivandrum.

The museum was first established in 1855 but demolished in 1874 to lay the foundation for a new building, during the reign of Ayilyam Thirunal. The construction was completed in 1880 and was named after Lord Napier, the Governor of Madras from 1866-1872. Designed by Robert Chisholm, the consulting Architect of the Madras Government, the architectural style of the museum is a mix of Indian, Chinese, Kerala, and Mughal Schools of architecture.

Renowned for its fine collection of exhibits, the Napier Museum serves as a prime attraction of the city that one must visit during Trivandrum trip. It .....

#4 of 35 Places to Visit in Trivandrum

At a distance of 13 km from Trivandrum, 67 km from Nagarcoil, 78 km from Kollam, 83 km from Kanyakumari, 159 km from Alleppey, and 212 km from Kochi, Kovalam is a coastal town on the shores of the Arabian Sea in Kerala. It is also one of the most famous places to visit as part of Kerala tour packages.

Often called the 'Paradise of the South', Kovalam is one of the wonderful Kerala beach destinations. Kovalam means 'A grove of coconut trees and the whole area beyond the shores around Kovalam is filled with the endless sight of coconut trees offering magnificent views while approaching the beach. Kovalam gained importance when Maharani Sethu Lakshmi Bai, the Queen of Travancore, built a palace, the Halcyon Castle on the top of a rock near the beach in the 1930s. Thereafter the place was brought to the public eye by her nephew the Maharaja of Travancore. After Independence, Kovalam was relatively .....

#5 of 35 Places to Visit in Trivandrum

At a distance of 3.5 Kms from Trivandrum Central Railway Station, Attukal Bhagavathi Temple is one of the famous temples in Kerala and famously known as the Sabarimal of Women. This temple got its place in Guinness Book of World Records as 'the largest gathering of women in the world'. About 1.5 million women gather at this temple to celebrate the famous Pongala festival.

Dedicated to Goddess Devi (another form of Goddess Parvathi), this temple is located in the heart of Trivandrum city. Pilgrims visiting Sri Padmanabhaswamy Temple consider their visit is incomplete without offering prayers at this temple.

Attukal Pongala is the main festival celebrated at this temple on Karthika day of Kumbham month (Feb/March). During this festival, millions of women gather around this temple and prepare Pongala (rice cooked with jaggery, ghee, coconut as well as other ingredients) to offer to the goddess to seek her best blessings.

#6 of 35 Places to Visit in Trivandrum

At a distance of about 10 km from Trivandrum Central Railway Station, Shanghumugham Beach is a famous beach situated in Trivandrum. It is one of the famous beaches in Kerala, and among the top Trivandrum attractions.

Shanghumukham Beach is known for its pristine waters and soulful sunsets. It runs next to the Trivandrum airport and a must-visit for those seeking tranquility during Trivandrum tour. The huge sculpture of a Nymph (Jalakanyaka) made by the famous sculptor Sri Kanai Kunjuraman and a restaurant shaped like a starfish are added attractions here.

Shanghumugham Beach is considered the 'Arattukadavu' of Sri Ananthapadmanabhan, the presiding deity of the city. On the Arattu day at Thiruvananthapuram, images of Lord Padmanabhaswamy, Lord Narasimha, and Lord Krishna are taken in procession to .....

#9 of 35 Places to Visit in Trivandrum

At a distance of 18 km from Kovalam and 27 km from Trivandrum, Poovar is a small coastal town at the southern tip of Thiruvananthapuram district in Kerala. Encompassed by a beautiful beach on one side and the backwaters on the other, it is one of the major Kovalam places to visit.

Situated close to the Neyyar River estuary, Poovar is one among the natural wonders where the Lake, River, Sea, and Beach meet the land. Poovar is a lovely island with long stretches of glowing sand, serene surroundings, and a refreshing gentle breeze. Poovar has been a trading center and port in ancient times where timber, sandalwood, ivory, and spices were traded. According to legends the port Ophir where King Solomon's trading ships landed is said to be Poovar. Another legend describes this as the place where Maharaja Marthanda Varma was given protection from his enemies by the powerful merchant, Moosa Marikkar.

#7 of 35 Places to Visit in Trivandrum

At a distance of about 4 km from Trivandrum Central Railway Station, the Zoological Gardens is a well-maintained zoo park situated in the complex of Napier Museum in Trivandrum. Also known as Trivandrum Zoo, it is one of the popular zoo parks in Kerala, and among the must visit places as part of Trivandrum sightseeing packages.

Established in 1859 by the Maharaja of Travancore, Thiruvananthapuram Zoo is one of the oldest Zoological Parks in India. Swathi Thirunal Rama Varma (1816-1846), the ruler of Travancore was the visionary behind the establishment of the Thiruvananthapuram Museum and Zoo. He had a broad variety of animals, including elephants in his horse breeding center. It was however left to his brother Uthram Thirunal Marthanda Varma and the then British Resident General Cullen which resulted in the establishment of Napier Museum and Zoo in Thiruvananthapuram. The zoo was originally built with the typical iron-barred .....

#8 of 35 Places to Visit in Trivandrum

At a distance of about 29 Kms from Trivandrum Central Railway Station, Neyyar Wildlife Sanctuary is spread over an area of 128 sq. kms at the foot of Western Ghats. The Neyyar Dam built over Neyyar River is located within the Wildlife Sanctuary.

The Sanctuary is the home of unique species of flora and fauna. From wild boars and elephants to the vast range of medicinal herbs, Neyyar is truly a nature lover's paradise. The crocodile farm, the lion safari park and the deer park are some of the main attraction of the Neyyar Sanctuary. Boating facility is available in the reservoir of the Neyyar Dam.

The best time visit Neyyar Dam and Wildlife Sanctuary is October to March.

Public are not permitted to enter the palace, but can view this grand old building from the gate.