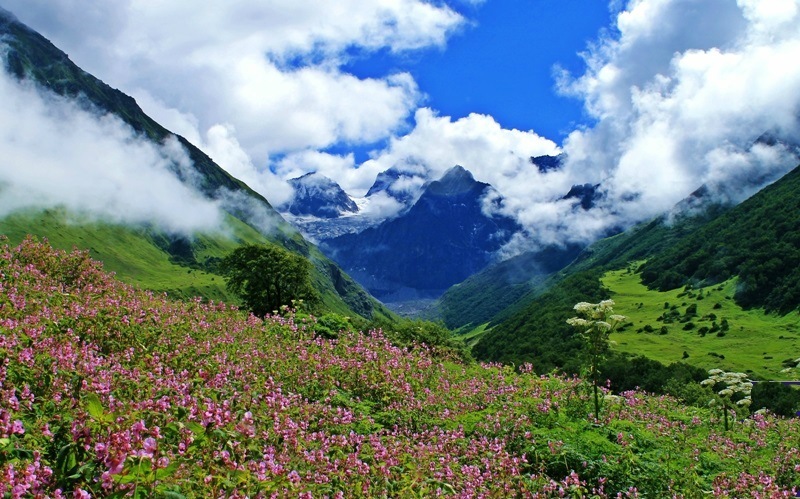 About Valley Of Flowers

Best Time to Visit Valley Of Flowers: May to October

At a distance of 16 km from Govind Ghat, 34 km from Joshimath, 41 km from Badrinath, 277 km from Rishikesh, 300 km from Haridwar, 318 km from Dehradun, and 518 km from Delhi, Valley of Flowers National Park is one of the most popular tourist destinations in India located in Western Himalayas in Chamoli district of Uttarakhand. It is perched at an altitude of 3600 m and is known for its meadows of endemic alpine flowers and the variety of flora. Valley of Flowers is one of the best national parks in India and also among the best Tourist places in Uttarakhand for trekking enthuasists.

Stretching over a vast expanse of 87.50 sq. km, the park is about 5 km long and 2 km wide. The gentle landscape of the Valley of Flowers complements the rugged mountain of Nanda Devi National Park to the east. Together, they encompass a unique transition zone between the mountain ranges of the Zanskar and Great Himalayas. Valley of Flowers and Nanda Devi National Park, together, constitute the Nanda Devi Biosphere Reserve.

The Valley of Flowers was declared a National Park in 1982 and was included in the list of UNESCO World Heritage Sites in 2004. Initially known as Bhyundar Valley, the Park was discovered and renamed in 1931 by British mountaineer Frank Smith. The highest point of the park is Gauri Parbat, at an elevation of 6719 m.

The Valley of Flowers is also believed to be the place from where Hanuman brought the magical herb to resuscitate Lakshman in the Hindu epic Ramayana. The legend still holds value as many people continue to believe that Sanjeevani, the magical herb, continues to grow in the park. There are other legends associated with the park. Locals believe it is the playground of fairies and that they descend to the valley in absence of humans. At present, no settlements and grazing is allowed in the national park.

The Park is known for its scenic beauty comprising alpine shrubs and different colorful flowers, milky white streams, snow-clad peaks and pristine air. More than 650 species of flowers including Brahma Kamal, Blue Poppy and Cobra Lily can be found in the Park. This richly diverse area is also home to rare and endangered animals, including the Asiatic black bear, snow leopard, musk deer, brown bear, red fox, and blue sheep. Birds found in the park include Himalayan monal pheasant and other high altitude birds.

The Valley is accessible from last week of May after the snow melts. It is closed between November to April because of snow bound paths and glaciers. Best time to visit is between late July and early September, when the valley is fully covered with beautiful flowers.

How to Reach Valley Of Flowers

Direct Buses to Valley Of Flowers

How to Reach Valley Of Flowers - Full Details

Top 10 Places to Visit in Valley Of Flowers

#1 of 6 Places to Visit in Valley Of Flowers

At a distance of 18 km from Govind Ghat, 42 km from Badrinath and 36 km from Joshimath, Hemkund Sahib is a well-known Sikh shrine located in Chamoli district of Uttarakhand. It is also known as Gurudwara Hemkunt Sahib and is one among the 508 important pilgrimages for Sikhs. Situated near Valley of Flowers, it is also a popular place for trekking in Uttarakhand apart from being one of the most scenic places in Himalayas.

Gurudwara Hemkund Sahib is dedicated to Guru Gobind Singh, the tenth Sikh Guru. This gurudwara is situated at an altitude of 4329 m and is surrounded by seven snow-capped mountain peaks. This gurudwara is the world's highest gurudwara and is visited by both Sikhs as well as Hindus. It is believed that at this particular spot Guru Gobind Singh meditated for a long time. According to Hindu mythology, Rishi Medhasa of the Markandeya Purana and Lord Ram's younger brother, Lakshman, performed penance at this site.

The construction of this gurudwara started in the .....

#2 of 6 Places to Visit in Valley Of Flowers

#3 of 6 Places to Visit in Valley Of Flowers

According to legend, Pandukeshwar was established by King Pandu, father of great Pandavas of Mahabharata epic. He was living with his wives Kunti and Madri in Pandukeshwar after giving his throne to his elder brother Dhritharashtra. One day Pandu went on hunting in the jungle and unintentionally killed a sage making love in deer form. While the sage was dying he cursed Pandu that he will not be able make love with anyone and if he does, he will die instantly. To get cleanse of sin of killing of the sage, Pandu installed the bronze image of Vishnu in the Yogadhyan Badri shrine and mediated. Meanwhile Kunti and Madri gave birth to Pandavas through .....

#4 of 6 Places to Visit in Valley Of Flowers

At a distance of 293 km from Rishikesh, 335 km from Dehradun and 523 km from Delhi, Badrinath is an ancient holy town in Chamoli district of Uttarakhand. It lies at an altitude of 3133 m in the Garhwal Himalayan ranges along the banks of River Alaknanda near India - Tibet border. It is one of the most famous centers of pilgrimage in India and also one of the most popular Uttarakhand places to visit as part of Char Dham.

Badrinath is the most important of the four sites of famous Char Dham pilgrimage; the other three being Puri, Dwarka and Rameshwaram. It is also visited as part of Chota Char Dham Pilgrimage along with Kedarnath, Yamunotri and Gangotri in Himalayan region of Uttarakhand. Surrounded by Nar and Narayana mountain ranges .....

#5 of 6 Places to Visit in Valley Of Flowers

Auli, also known as Auli Bugyal which means meadow in Garhwali, is located at an average altitude of 2800 m in the Garhwal Himalayas. Earlier, Auli was a prominent trade centre and the trails of Auli were frequently traversed by the semi-nomadic Bhotiya tribes who maintained barter trading with Tibet for centuries. According to legend, the revered Guru Adi Shankaracharya visited Auli during 8th century AD. He built a math at Joshimath, which still is intact .....

#6 of 6 Places to Visit in Valley Of Flowers