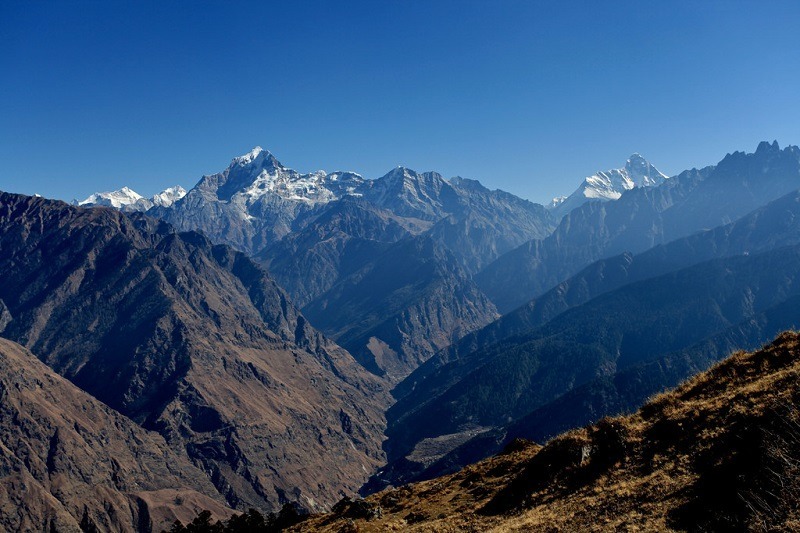 At a distance of 26 km from Lata Village, 52 km from Joshimath, 94 km from Badrinath, 300 km from Rishikesh, 345 km from Dehradun, 327 km from Haridwar and 535 km from Delhi, Nanda Devi National Park is situated in the higher ranges of Himalayas in Chamoli district of Uttarakhand. The entire park lies at an altitude of 3,500 m and is surrounded by the Nanda Devi Mountains on three sides. It is one of the most scenic national parks in India apart from being a top trekking destination as well as one of the popular Tourist places in Uttarakhand.

The Nanda Devi basin was declared a game sanctuary in 1939. In 1982, an area of 630.33 sq. km was added and it was declared a national park, which now forms the core zone of Nanda Devi Biosphere Reserve. Along with adjoining Valley of Flowers National Park, Nanda Devi Park was inscribed as UNESCO World Heritage Site in 2004.

Nanda Devi National Park covers an area of 630.33 sq. km, which is surrounded by a buffer zone of 5148.57 sq. km. The whole region of Nanda Devi National Park falls under the Western Himalayas Endemic Bird Area (EBA). The park is divided into two parts - Inner Sanctuary and Outer Sanctuary. The Upper Rishi Valley, often referred to as the Inner Sanctuary is featured by Changabang, North Rishi and North Nanda Devi glaciers. The Trisul and Ramani glaciers are features of the Outer Sanctuary. The forest cover in this park is mainly restricted to the Rishi Gorge and the inner circle is quite dry.

The park provides shelter to snow leopard, Himalayan black-bear, serow, Himalayan musk deer and Himalayan Tahr. There are around 114 species of birds, including orange-flanked bush robin, Indian tree pipit, yellow-bellied fantail flycatcher, blue-fronted redstart and vinaceous-breasted pipit. Varied species of butterflies can also be seen in the Nanda Devi National Park. The park has around 312 species of flowers, along with juniper and alpine vegetation.

Trekking is the most popular activity in the national park. In 1982, access to trekkers was banned to protect the biodiversity. However recently, tourists in small numbers are allowed to visit the park. Visitors need to get the permission from Nanda Devi National Park Authorities, Joshimath for the trek. The visitors will move in groups and each group will consist of maximum of five visitors. Not more than two groups are permitted in one day and not more than four groups will be permitted in one week. One registered guide will accompany every five visitors. Visitors above 14 years will only be allowed to participate in the trek. The entry point to the park is Lata Village which is around 26 km from Joshimath and the trek exits at Surai Thotha which is 30 km from Joshimath.

The total duration of Nanda Devi Trek is 5 Full Days.

The first day of the trek is probably the toughest and involves a steep ascent of almost 1524 m with a break at Belta and it takes 8-9 hours. The camp at Lata Kharak is situated at an altitude of 3689 m and is surrounded by high peaks.

The trek begins with a steep climb up to Jhandi Dhar and further up to Bagfyana pass. From here the trail ascends and descends through the narrow gorge of Satkul to Dharansi Pass (4250 m).

Trek to Malthuni - Bethratoli Ridges of the inner and outer sanctuary form a magnificent pass up to Rani Kholi and Donidhar. The trail is a steep descent of about a kilometer to Debrugheta. Return to Dharansi Pass by late afternoon.

Return trek up to Jhandi Dhar of about 7.5 km and further steep descent of 4.5 km to the Hitoli camp site through thick forests of Rhododendron, Birch and Fir. Overnight stay in tents at Hitoli campsite.

One has to trek 5 km to Tolma village through the rich forest of Thuner, Kail, devdar and Surai. Then further trek down 3 km to Surai Thotha, from where it is a 30 km drive to Joshimath.

There are very few accommodation options near the national park. Visitors can choose to stay in the hotels at Joshimath. There are hardly any restaurants within the park. It is advisable to carry food and water.

The ideal time to visit the Nanda Devi National Park is from May to October. In the months of June to August, there is heavy rainfall in the area. The route to Nanda Devi remains

#1 of 4 Places to Visit in Nanda Devi National Park

#2 of 4 Places to Visit in Nanda Devi National Park

Auli, also known as Auli Bugyal which means meadow in Garhwali, is located at an average altitude of 2800 m in the Garhwal Himalayas. Earlier, Auli was a prominent trade centre and the trails of Auli were frequently traversed by the semi-nomadic Bhotiya tribes who maintained barter trading with Tibet for centuries. According to legend, the revered Guru Adi Shankaracharya visited Auli during 8th century AD. He built a math at Joshimath, which still is intact .....

#3 of 4 Places to Visit in Nanda Devi National Park

At a distance of 23 km from Joshimath and 35 km from Auli, Bhavishya Badri, also spelt as Bhabisya Badri, is situated near Subhain village of Niti Valley on the way to Lata from Tapovan in Uttarkashi district of Uttarakhand.

Bhavishya Badri is one of Panch Badri temples located at a height of 2744 m above sea level. The presiding deity of this small temple is Lord Narsimha, an incarnation of Lord Vishnu and known to be the future seat of Badrinath. According to the legend of Bhavishya Badri, at the end of Kali Yuga, a landslide will occur collapsing Nara and Narayan hills and blocking the path to Badrinath. This devastating landslide will occur when the right arm of the statue of Narasimha currently situated in Joshimath detaches from its body. Then, Badrinath will appear at the Bhavishya Badri temple and be worshipped here, instead of the Badrinath shrine.

Bhavishya Badri can be reached via Saldhar which is 18 km by road .....

#4 of 4 Places to Visit in Nanda Devi National Park

At a distance of 20 km from Auli, 27 km from Joshimath, 21 km from Tapovan & 17 km from Gurson Bugyal, Kuari Bugyal is a famous meadow known for untouched beauty of Himalayas situated at an altitude of 3350 m. It is well known for one of the famous trekking trails in Uttarakhand, Kuari Pass Trek.

Kuari Bugyal is perfect place for trekking. During summer season, tourists throng to this place to explore the trekking trails of this beautiful region. Lord Curzon made the trek to Kuari Pass, and since than it has come to known as Curzon's trail. It is very popular among European and American travelers.

There are four trekking routes to reach Kuari Pass with different starting points at Auli, Ghat, Joshimath and Tapovan. The Ghat route is the longest trail with a length of 40 km spread across 4-5 days while Auli route is shortest which is 20 km long and take about 3 days. All the trails reach Gailgarh, from where Kuari Pass is scaled on same day and returned back to the base camp. .....