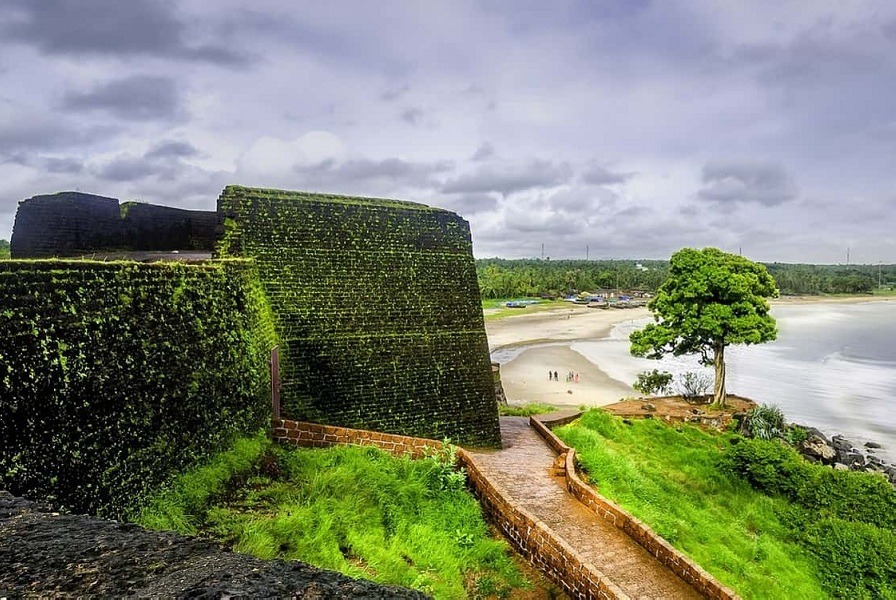 At a distance of 12 km from Bekal, 48 km from Mangalore, 92 km from Kannur, 110 km from Madikeri, 183 km from Kozhikode, 356 km from Coimbatore, 361 km from Kochi, 369 km from Bangalore, and 570 km from Trivandrum, Kasargod is a coastal town in Kerala. Bordered by the hilly Kodagu and Mangalore districts of Karnataka, it is the headquarters of Kasargod district and among the secluded places to visit as part of Kerala packages.

Kasargod is a delightful blend of various religions, cultures, and bounty of nature. The variety of art and culture of the town speaks volumes about its diversity. Majestic forts, lofty hills, meandering rivers, and golden beaches are the main attractions of Kasaragod tour packages. In fact, one can hear about seven languages spoken in the town, Tulu, Malayalam, Kannada, Tamil, and Konkani being the most famous ones. The coir and handloom industry here are extremely famous around the world. It is one of the best places to visit near Kozhikode.

According to history, Kasargod was ruled by famous Kolathiri kings. Later it came under the Vijayanagara kings and then Ikkeri naiks came to power and ruled till the end of the 16th century. Hyder Ali of Mysore conquered Kasargod during his try to conquer the whole of Kerala, but he failed in doing the same in the case of Thalassery Fort. Later his son Tipu Sultan conquered Malabar and gave up based on the Treaty of Srirangapatnam with the British. Before the formation of Kerala, Kasaragod was a part of the erstwhile South Canara district of Madras Presidency. Kasaragod became part of the Kannur district of Kerala in 1956 and was declared as a district in the year 1984.

Though the town oozes charm and tranquility from every aspect, what dominates the varied tourist attractions here is the magnificent 300-year-old Bekal Fort, among the popular places of heritage in Kerala. Sprawled across a headland that runs into the Arabian Sea at the main beach, this fort exudes an old-world charm that is spellbinding. Located on the shores of the Arabian Sea, Kasargod has some pristine palm-fringed beaches. Bekal Fort Beach offers a spectacular view of the imposing Bekal Fort and has ample facilities for recreation and relaxation. Pallikere Beach, Kappil Beach, and Kanwatheertha Beach are some of the popular places to visit in Kasaragod. Besides, Kasargod is also blessed with a dozen estuaries as 14 rivers crisscross the district that nourishing the verdant landscape. One can holiday beside the serene backwaters, cruise on them, savor exotic freshwater catch, and avail of other exciting watersport facilities at Valiyaparamba, Chandragiri, etc.

Mangalore International Airport, located about 60 km away, serves as the nearest airport to Kasargod town. Kasargod has a railway station which helps connects the town to many major cities of the country including Goa, Jaipur, Surat, Jammu Tawi, Mangalore, Chennai, Pune, Mumbai, Kochi, Delhi, Chandigarh, Bhavnagar, Bangalore, Indore, Pondicherry, Hyderabad, Okha, Amritsar, Dehradun, Trivandrum, and Coimbatore, etc. With a well-maintained network of roads and the National Highway 66 passing through the town, Kasargod is easily approachable from all nearby cities like Kozhikode, Kannur, Mangalore, Bangalore, Mysore, Kochi, Mumbai, Goa, Trivandrum, and Alleppey.

Being a coastal town, Kasargod experiences a temperate climate. The summers are hot and humid while winters are cool and pleasant. The best time to visit the town is from September to January. Monsoon season receives heavy rainfall and thus is not recommended as the right time to visit the place.

How to Reach Kasaragod

How to Reach Kasaragod - Full Details

Top 10 Places to Visit in Kasaragod

#1 of 2 Places to Visit in Kasaragod

Spreads over an area of 40 acres, Bekal Fort happens to be the biggest fort of Kerala, and among the famous heritage sites near Mangalore. This fort is more than 300 years old and is believed to have been built in the 1650s by Sivappa Naik of the Ikkeri dynasty. There is also another belief that it was originally built by Kolathiri Rajas and was captured by Sivappa Naik. The fort was occupied by Hyder Ali of Mysore in 1763 AD and later by the British. Being the source of attraction for historians and tourists, .....

#2 of 2 Places to Visit in Kasaragod

At a distance of 2 km from Bekal Fort, 28 km from Kasaragod, 62 km from Mangalore & 78 km from Kannur, Bekal Fort Beach is a beautiful sea beach on the Malabar Coastline of Kerala. Situated near Bekal Fort, it is one of the best beaches in Kerala, and among the top places of sightseeing in Kasaragod.

Bekal Beach is one of the best-maintained beaches in Kasaragod, and among the stunning beaches near Mangalore. Swaying palm trees along the ridges of the beach, its evergreen outlook, the turquoise water of the Arabian Sea, and the tranquility that exists in and around Bekal Beach make it a much sought-after beach in Kerala. Along with the historic Bekal Fort, this sandy retreat leaves an everlasting impression in the minds of its visitors who visit the fort during their Kasaragod trip.